What uniform did the Supreme State Arbiter of the USSR wear?

What uniform did the Supreme State Arbiter (главный государственный арбитр) of the USSR wear?

I think I saw it on a site before but I cannot find it now.

This is an example of a person in this position in uniform. 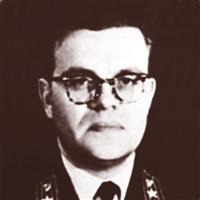 the only references to a similar title I can find hint at it being the Chief State Arbiter.
Being a civilian position (wikipedia (http://en.wikipedia.org/wiki/1977_Soviet_Constitution) lists the post in conjunction with constitutional changes only), there would be unlikely to be a uniform associated with the role (though of course in the USSR many civic officials, especially high ones, did have high military of KGB rank as well (often general or marshal level ranks), sometimes ceremonial, sometimes actual, and would occasionally wear that uniform).
http://books.google.nl/books?id=KgNej_7pCMYC&pg=PA127&lpg=PA127&dq=soviet+supreme+state+arbiter&source=bl&ots=ZjP5EOMEa8&sig=S5KfyMeUitRU_ibofBhkJMaRDM4&hl=nl&sa=X&ei=ecOUUZerDoXW4ASk-oCADg&ved=0CEEQ6AEwAw#v=onepage&q=soviet%20supreme%20state%20arbiter&f=false also mentions the role, with the "deputy chief state arbiter" nullifying a law in 1992.
http://www.cna.org/sites/default/files/research/2790023000.pdf lists the position as being a political appointment by the congress of peoples' deputees in 1988, in the same sentence as talking about the chairman of the supreme soviet, again indicating a civilian level position.

Interestingly, http://www.ksrf.ru/en/Info/History/Pages/default.aspx does talk about a supreme state arbiter elected in 1990, so maybe the title changed. But again indicates effectively a civilian rather than military position, which would not be uniformed.

USSR, but also of legislative drafts as well as legal acts of the Prosecutor-General of the USSR, Supreme State Arbiter of the USSR and other normative acts.

http://cmsdata.iucn.org/downloads/zaharchenko_aarhus_paper.pdf mentions a "supreme arbitration court", could be the position is the head of this unit, which seems to deal with economic affairs (of course in 1992 it's post-Soviet, but many of the Soviet era institutions are still in place with their names unchanged).

In 1992, the Social-Ecological Union brought an unheard-of kind of case to the Supreme Arbitration Court against a deci - sion of the Russian government to waive taxes for a Russian-American joint oil venture that involved Conoco and a state enterprise from Arkhangelsk. 55

That document goes much deeper into the role and its powers, which all seem civil in nature, mostly having to do with deciding on legal issues.

No sources I could dig up give any indication of it being a uniformed position, or the holders of the office wearing a uniform of any kind (unless you'd consider the typical ill-fitting Soviet business suits to be a uniform, or the expensive Saville Row suits of the high ranking leaders who could plunder state coffers to have London tailors make suits for them).

-------------------------------------
Digging up more about N.P. Malshakov in particular, now that as have a name for the person wearing the uniform.
http://books.google.nl/books?id=SUwbD8mKRFMC&pg=PA386&lpg=PA386&dq=malshakov+ussr&source=bl&ots=L8Rlx0PnHo&sig=APWOI8899zKFnbsgKBSmIADSaDk&hl=nl&sa=X&ei=Z8aVUfGxJcXesgb1zYCYAw&ved=0CDsQ6AEwAQ#v=onepage&q=malshakov%20ussr&f=false mentions him in a position that appears to be related to the KGB, dealing with Solzhenitsyn, and gives him the title "deputy chief of the department of administrative organs", whatever the hell that is, in a communication by Yuri Andropov in 1972.
In that function, if it is indeed a KGB function, he would have had a uniform, and given his flowery title probably a general level rank.
15 years later we see him again, as listed here http://books.google.nl/books?id=po9Ki83S2WwC&pg=PA392&lpg=PA392&dq=malshakov+ussr&source=bl&ots=VVWkX6Fxar&sig=TM0z84jgSm4W4JFjphTNoSsiqa0&hl=nl&sa=X&ei=Z8aVUfGxJcXesgb1zYCYAw&ved=0CD8Q6AEwAg#v=onepage&q=malshakov%20ussr&f=false when he is appointed chief arbiter of the USSR by Gorbachev (who, of course, had also held a high ranking KGB position at some point, maybe he knew Malshakov from that time).
www.dtic.mil/dtic/tr/fulltext/u2/a361245.pdf again mentions Malshakov, this time in an interview with Pravda in 1988, where he spews typical communist lines when questioned about labour issues.
http://visualrian.ru/en/site/gallery/#625482/context[history][period]=1980 here is a photo of Malshakov taken in 1989, from the archives of the Soviet news agency Novosti, showing him a much older man than in the photo @Anixx has and wearing a business suit.
Leads me to conclude the uniform worn in the older photo is probably a KGB uniform, the photo taken over a decade before he took up the position of Chief Arbiter of the USSR.

Not the answer you're looking for? Browse other questions tagged soviet-union uniform or ask your own question.

15
When and how did the West lose its dependency on the USSR for Titanium?
1
Is Russia a direct successor of the USSR? Could the USSR be considered to continue existing under a different name?
4
Did the USSR pledge support to Czechoslovakia before the Munich Agreement?
9
What type of military uniform is this?
12
Why did the USSR annex Tannu Tuva?
4
What were traffic lights like in the USSR?
15
Why did the USSR stop in the Winter War against Finland in 1940?
7
What uniform is my Cossack great great grandfather wearing?
16
What uniform are these gentlemen wearing?