In England, how many Jews died during the persecutions of the crusades during 1190-1200?

As is well known Steven Runciman, a British historian known for his work on the Middle Ages, definitively clarified what the Holy War had been: "The Holy War itself was nothing more than a long act of intolerance in the name of God, which is the sin against the Holy Ghost".

However I'm not interested in generic discussions or debates on this matter, but I want only to know precise notices about the massacre of Jews in England during 1190-1200.

In "God's War: A New History of the Crusades" Christopher Tyerman wrote:

[...] during the recruitment for the third crusade in England in 1190 were attack on the Jews especially vulnerable with the king's campaign for funds, his approaching departure and immediate financial requirements of the crusader who converged in English town ports and main roads in the early months of the year. In Lent 1190, bands of English crusaders, some motivated by a misguided notion of serving God and the cross, began looting Jewish property in commercial centers such as King's Lynn and Stamford. The violence reached a ghastly climax at York in mid march Well-connected local crusaders led a concerted attack on the Jewish community that culminated in a mass suicide and massacre at the royal castle, now Clifford's Tower, after which, revealingly, the bloodstained crusaders went to York Minster to destroy the Jews' bond of credit stored there.

To be honest, this is a question that can be answered with a quick look at Wikipedia, which appears reasonably well sourced, and probably as reliable as any answer you will receive here.

To summarise Wikipedia ... there were an estimated 3000 Jews in England in 1278. 500 died at York in 1290, 300 died in London in 1279. The source for the London massacre of 1289 (Roger of Howden) does not mention a number, but it seems to have been a major incident in which many houses were burned down in the belief that the king had ordered the massacre.

Here's the page for Vol 3 of Howden's chronicle giving the account of the London massacre: 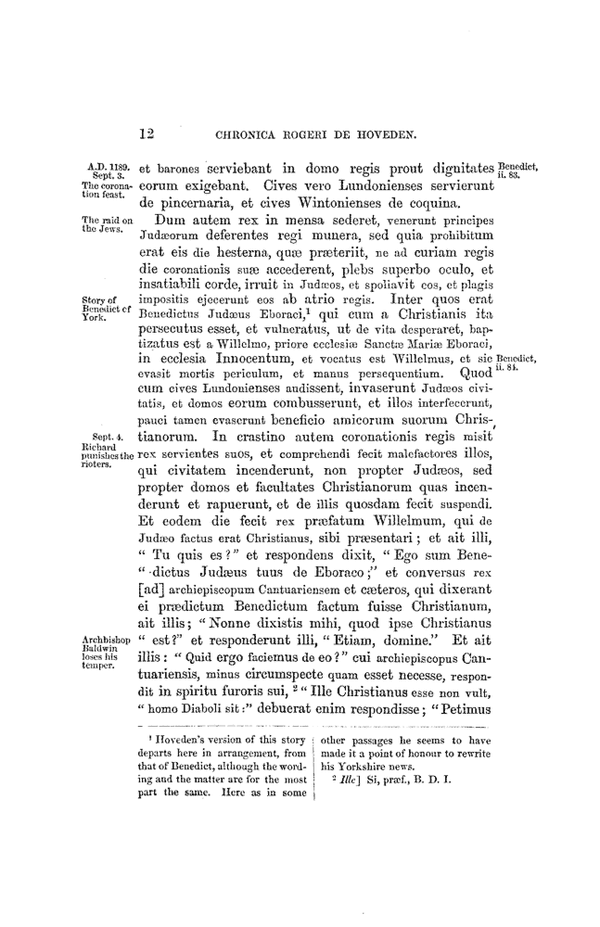 A translation of the Latin can be found here: http://legacy.fordham.edu/halsall/source/hoveden1189b.asp

Of course your question was "In England, was the Jewish population drastically reduced when these persecutions ended?" The answer is 'yes' because 100% of remaining Jews were removed from England by expulsion in 1290. However if you mean how many were killed during the persecutions, then between 20% and 40% looks like a realistic figure.

Most accounts do not state any numbers, but commonly report that by far the largest number of deaths was at York, where about 500 are known to have been killed. The places and numbers include the following:

If we count 100 at each place where the number is not known, it comes to around 1000 total.

8
Names in England during the Tudor period
11
How close were the living standards of India compared to England during the medieval period?
7
How were peasant houses constructed in medieval England?
4
How did John Duns Scotus live in England during the Scottish Wars of Independence?
2
Why did Jews have the support of the merchants in the push for Emancipation in England?
75
What drugs were used in England during the High Middle Ages?
11
How was ownership of property managed during the Black Death, when so many original owners had died?
9
How many people died in the British Isles from religious persecution between 1532 and 1791?
5
How many 'pubs' (alehouses, inns and taverns) were there in England in 1577?