I found in an antique shop in France the item seen below and would like to know more about the age and origin and material based on the logo/mark.

The seller told me it is from the Napoleon III epoch (~1850s) and pointed to the anchor logo on the top-left of the item with the letter N and D.

If it helps here is some more information about the item: I'm unable to determine the material of the frame. I don't think it is plastic but it feels a little bit like it.

The statue is, according to the seller, ivory-ish (in French he said: ivoirie). I can't tell whether this is correct or not.

From the state of the object I have doubts that this is 150 years old in addition I think it was (re-)assembled to its current form (recently). It is after all a present for the first communion ("souvenir de 1ere communion").

So, back to my question: Is this logo/mark something special or known? Is it a maker-sign? Can it be used to identify the epoch of that item? 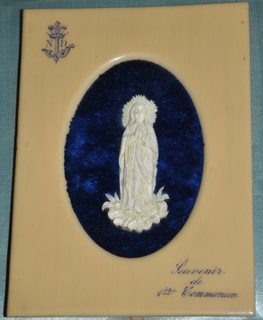 EDIT: In the meantime I figured out that the figure represents virgin Mary. In addition to @RISwampYankee's comment, the logo could also be a family emblem or the one of a school.

At that time there were tons of institutions called "Notre Dame", so it is pretty hard to find.

According to French Wikipedia, first communion was at age 7-8 in 1910. Not sure about before, but that might be from a école élémentaire (or the equivalent at that time).

Your best bet is to find similar anchors in this list of city blasons, and check whether each city had a "Notre Dame" school.

The city of Berck has a anchor in its blason, and has a school+college named Notre Dame. There might be others.

As for the material of the frame, it's celluloid. I don't know when the technique for this sort of striped fake-ivory celluloid arrived, but I have found references to "Ivory Pyralin" which usually means the striped variant of celluloid from 1913. It also fell out of favor in the 1940's as it's extremely flammable.

"Ivorish" could mean it's some sort of bone.

Not the answer you're looking for? Browse other questions tagged 19th-century religion france identification or ask your own question.

8
Sources for letters written during the Boer Wars?
4
Why did the July Monarchy dispense with Montgaillard's services?
18
Flag with dark border and light inner?
2
Where does Marsilio Ficino write that all nations worship a God whose name is spelled with four letters?
5
Can anyone identify these swords with carved ivory grip and narrow guard
8
When and where did praying with eyes closed originate?
1
Where can I find fully translated letters from János Bolyai and Farkas Bolyai?