What role did British cartoonists play in the early 1800?

Can anybody explain the historical context and the reasons for which the comic below, preserved to the British Museum, was painted? What is its meaning? Why is Napoleon so little? And, more generally, what role did British cartoonists play in the early 1800 in reference to communicate ideas to public opinion? 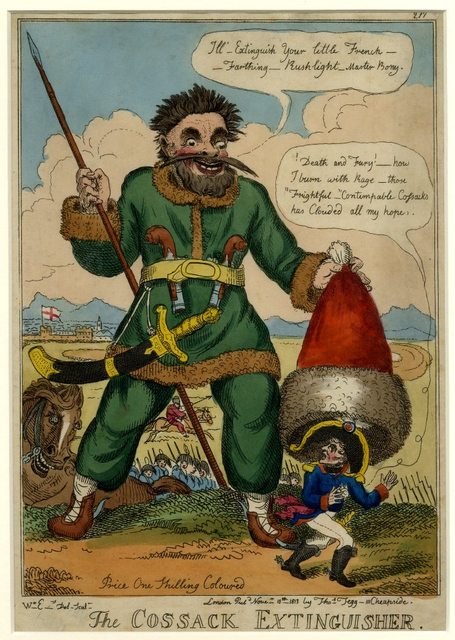 british-empire england
Share
Improve this question
edited May 22 '13 at 19:07

This painting 'The Cossack Extenguisher' was drawn by William Elmes in 1813.

Description of the painting: from BritishMuseum

A smiling bearded Cossack strides towards the spectator, spear in hand, with the left hand he places his conical furred cap over a tiny terrified Napoleon. He says: "I'll Extinguish Your little French— Farthing—Rush light—Master Boney." Napoleon exclaims, trying to run away: "Death and Fury!—how I burn with Rage—those "Frightful—" Contempable [sic] Cossacks has Clouded all my hopes." They are on a plateau: the head of the Cossack's horse is on the extreme left; troops are marching on the plain, where a Cossack is galloping. In the background is the walled town of Leipzig, backed by mountains.

Reason for the painting:

This painting was drawn after the Russian campaign. The result of this campaign was decisive Russian victory. In this campaign Russians often raided the french with light Cossack cavalry which made huge damage to the French army. Cossacks under commander Ataman Matvei Platov (1757-1818) scourged the French during their retreat from Moscow in 1812, and again after their defeat at Leipzig. Hence, Leipzig is shown in the background.

About depiction of Napoleon's height you can refer to the- was napoleon as short as common knowledge states - question on the site.

The original image is in the British Museum it is an Elmes print, published by Tegg in 1813. The page referenced also contains links to related cartoons.

Williamsburg VA has a selection of cartoons about the US revolution for independence, including a discussion of the "macaroni" in Yankee Doodle.

The image isn't very clear, but the earliest cartoon that I personally remember is one that depicts Charles I's execution - not what we think of as a traditional cartoon subject

45
Was Napoleon as short as “common knowledge” states?