According to the myth, Alexander the Great was conceived through the sexual intercourse of Olympias and Zeus, as shown in the below painting by Giulio Romano.

But, who is the man whose face is showed in the top-right corner? And why did Giulio Romano paint the legs of Zeus as the body of a snake? What was it believed at that time (circa 1500) of this myth? 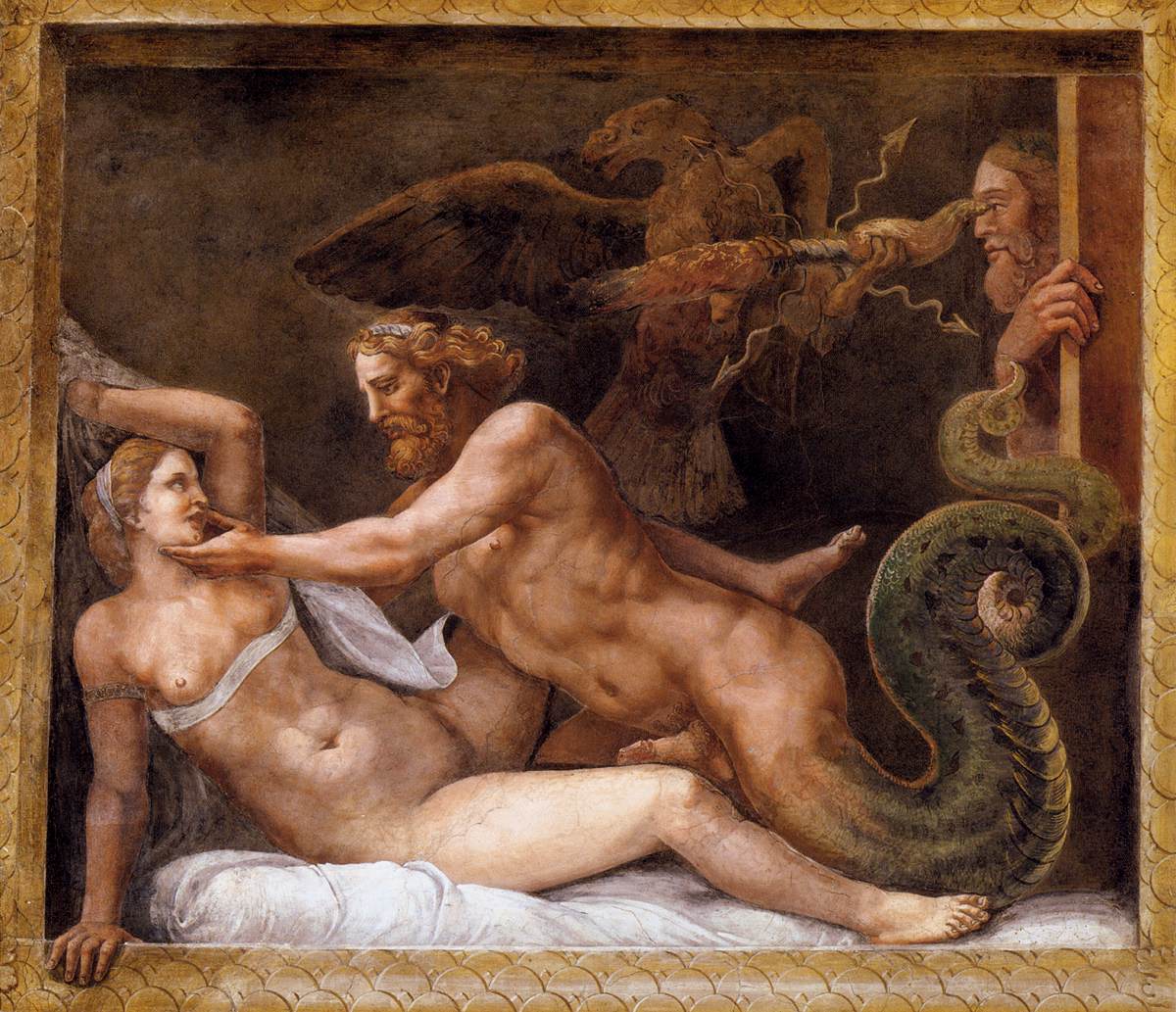 art alexander-the-great greek-mythology
Share
Improve this question
edited May 26 '13 at 3:18

The man in the top right corner is Philip II of Macedon. According to legend, Zeus took to the serpent form and seduced and had coitus with his wife Olimpias and fathered Alexander the Great (or Alessandro Magno in Italian).

This is why Zeus is shown in the half serpent form. The legend also says that Philip caught a glimpse of this and hence one day would lose the eye through which he saw this. That is why Romano shows him being blinded by Zeus's eagle.

Philip lost his eye in the siege of Methone in 355-354 B.C. a year after Alexander was born.

Plutarch's The Life of Alexander details the legend. I quote the relevant sections:

Once Philip found his wife asleep, with a large tame snake stretched beside her; and this, it is said, quite put an end to his passion for her, and made him avoid her society...

We are told that Philip after this portent sent Chairon of Megalopolis to Delphi, to consult the god there, and that he delivered an oracular response bidding him sacrifice to Zeus Ammon, and to pay especial reverence to that god: warning him, moreover, that he would some day lose the sight of that eye with which, through the chink of the half-opened door, he had seen the god consorting with his wife in the form of a serpent.

8
Number of humans that are killed by Alexander and Genghis Khan?
4
Alexander the Great and Religion
5
Who is the model in this Edward Burne-Jones painting?
1
Who's the artist behind this popular painting?
0
Can anyone help identify this painting? (Western, representative, c19-c21)
25
Were Alexander the Great and Hephaestion lovers?
2
In the painting “Ariadne”, by Arthur Streeton, why are the sails of the ship white?