Why is Finland represented as a Soviet satellite in this 1947 cartoon? 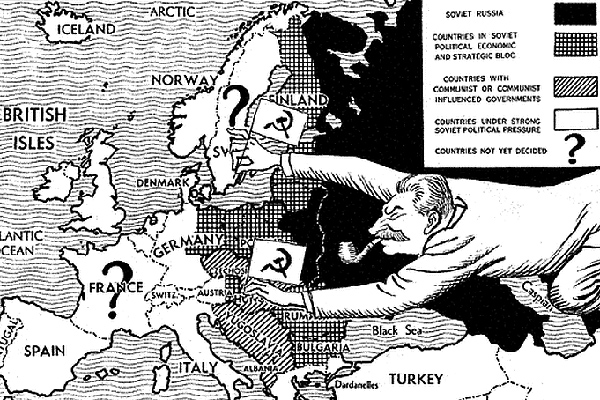 The cartoon is a British one. I found it at http://lenta.ru/articles/2013/05/28/secretwar/ but without any specific attribution.

See the description of the hashing applied to Finland "countries in the Soviet political economic and strategic block".
While nominally independent, Finland was economically subservient to the USSR because of their losing out in the wars between the countries which happened in parallel to WW2 (the Soviet invasion of Finland led to Finland aligning with Germany during WW2 without joining the Axis powers, they were to pay for that for a long time after).
At the time, and for a long time yet, Finland would be highly influenced by the USSR on many fronts. While never technically in the Soviet block, they were a Soviet leaning unaligned country similar to India and (for a time) Indonesia. Their military had almost exclusively Soviet equipment, trade was mostly with the USSR, Soviet equipment filled Finish factories, Soviet cars their roads, etc. etc.
Over the decades those ties loosened, and now they're more focused on the EU, but just after WW2 they were firmly under the Soviet economic and military umbrella.

Finland was kind of a special case. They weren't a Warsaw Pact country, but geography put them in a position where if their Russian neighbor wanted to invade, no power on earth would really be capable of stopping them.

Due to this reality, the country adopted a policy of not doing anything whatsoever that might prod the USSR in that direction. They signed a self-defense pact with the USSR, separate from the Warsaw Pact, and on occasion felt it advisable to carry out the same policies that the Warsaw Pact did (including not participating in the Marshall Plan). Their foriegn policy was made essentially the same as the rest of the Soviet Bloc, and they kept their government structured in ways that didn't offend Soviet sensibilities. They would even censor their local media according to Soviet complaints, ultimately banning thousands of books and many American movies.

In the West a special term was coined for this kind of process: Finlandization. Fear of that process spreading to other countries had a large hand in the expansion of the USA's military in the Cold War period. It was thought that if the USA couldn't provide a credible military counterbalance, other Soviet Block neighbors in Asia and Western Europe might adopt the same polices.

An important point not mentioned in the other two excellent answers is that Finland extradited political refugees, i.e., people who crossed the border over to Finland and asked for a political asylum were immediately arrested and escorted to the Soviet Embassy.

Because that was the reality of the time. Note that even Sweden and France both have question marks.

One year earlier, in 1946, Churchill had spoken of an Iron Curtain "from Stettin on the Baltic to Trieste on the Adriatic." He didn't extend it north through the Gulf of Bothnia (between Sweden and Finland), but he could have.

In the case of Finland, this was grounded in several historical realities:

As a result, Finland also aligned its foreign policy with Russia's for some decades thereafter.

Not the answer you're looking for? Browse other questions tagged 20th-century soviet-union cold-war united-kingdom finland or ask your own question.

7
Did John Wesley pray because he had not been persecuted in three days?
3
Did the Chief of Soviet General Staff really say this?
30
What are the text and subtext of this 1949 Soviet cartoon?
15
Why did the USSR stop in the Winter War against Finland in 1940?
28
In this cartoon from Puck, what indicates the identities of France and Britain?
11
Why was the Soviet Naval Infantry disbanded in 1947?
15
Why was Poland subject to much harsher Russification than Finland was?
29
Did the Soviet Union or its satellite states have any broadcast propaganda media for an international audience?