Why was Woody Woodpecker a "natural" hit during WW2?

Woody Woodpecker "with his innate chutzpah and brash demeanor, ... was a natural hit during World War II. His image appeared on US aircraft as nose art", Wikipedia says.

Why was Woody Woodpecker a "natural" hit during WW2? (Note that the word "natural" is used on Wikipedia.) Reading "natural" along with "Bugs Bunny" and "Daffy Duck," "Woody Woodpecker" was a "screwball" or "comic relief" character that Hollywood produced for children in the early 1940s.

I understand that the character had or represented something that people felt at that time. What was it, and why did Hollywood produce such characters for American children during this era?

(Bonus question) Can someone show a picture of a US aircraft where, during WW2, Woody Woodpecker was painted? I see "nose art" on Wikipedia but haven't found one. 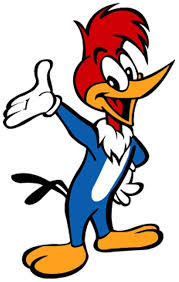 Woody Woodpecker was actually created in the 1930s and went through several changes before being presented to the public in his first cartoon short in 1940. His second carton, titled appropriately enough "Woody Woodpecker", had a higher level of energy and featured a jazzy musical score that apparently appealed to adult audiences. The fact that his cartoons were more outrageous, made people laugh, and featured rousing musical accompaniment no doubt contributed to his overall success.

Keep in mind that these cartoons were produced as shorts for showing in theaters, and not on television. Most of the movie going public during this time period was adults, and not children, so I believe you are incorrect in assuming that these cartoons were made expressly for children. Most American children would not actually be exposed to Woody until 1957 when he was first broadcast on television.

In the early 1940s, World War II was ranging. A high priority for elders at the time was to get the minds of young children off the war (while urging boys in their late teens to get ready to fight). The psychology is similar to that of other "crisis" periods such as the Revolutionary and Civil wars. These comic characters served as "babysitters" (and role models) for young children at the time.

15
Were there any war movies made during WW2 that were well regarded by front-line American soldiers?
6
Natural born citizen
24
Why didn't Germany attack Turkey during WW2?
24
Why was there lack of food during WW2 in the UK?
9
What was happening to bank deposits during WW2?
13
How fortified was Cyprus during WW2?
18
Why didn't the US produce stamped weapons like the Germans during WW2?
5
During WW2, why did the USA occupy Clipperton Island?