Was Antarctica a factor in the Falklands war?

Were Argentina's and the UK's Antarctic territorial claims significant in the Falklands War? 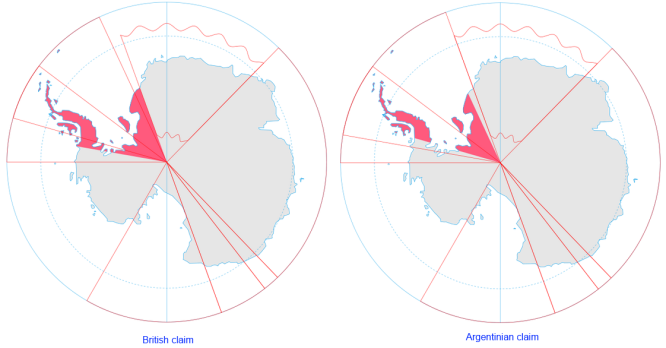 It was not a factor - both the UK and Argentina had signed the Antarctic Treaty, placing all territorial claims south of 60 degrees in abeyance indefinitely.

The full text of the original treaty

I am not aware of either nation having expressed a wish to go back on that treaty, and it was signed over 20 years before the Falklands War.

Although various countries have laid "claims" to various portions of Antarctica, those claims are basically unenforceable, because it is basically uninhabited, except for the occasional visitor, scientist, etc. It's hard to imagine this being worth fighting for.

The Falklands (Malvinas) on the other hand, are a different story. They have some 3,000 people (and something like five times as many sheep). They are also a major port of call for fishermen and cruise tourists from the outside. As a result, the islands have an economy that does about $100 million a year of both import and export trade, an amount way out of proportion to the population. Hence they were reasonably a causus belli.

Argentina, Chile, and the U.K. have overlapping claims on the Antarctic Peninsula, but the Falkands War was limited to the Falklands, South Georgia, and the South Sandwich Islands.

There are usually some people who get a feeling of superiority from taking the cynical line, so in this case someone may well say "Of course all the talk of justice, patriotism, standing up to aggressors etc. was phony, it was really all about control of Antarctica's untapped oil reserves."

However, while that might be about 1% of it so far as the UK and Argentine governments were concerned, I doubt it was important as:

I am British and was aged 18 or 19 at the time Argentina invaded with very little warning and temporarily seized the Falklands by surprise. Most people subsequently followed the news of the dispatch of a British naval and military task force to the South Atlantic and their eventual victory. The War did divide people, but most in Britain who I spoke to who supported the war did so because they saw it as standing up to aggression and/or hurt national pride.

I remember trying to explain to a puzzled New Zealander why we had fought for remote islands that previously most people in Britain had scarcely known existed. I said he would probably understand why many of us were angry at the surprise Argentinian invasion if he ever woke up to learn that a foreign country had seized by force some equally obscure islands far out in the Pacific over which New Zealand claimed sovereignty.

Whereas the people I encountered in Britain who opposed fighting to recover the Falklands seemed to be of two types: the type of committed 'leftie' to whom their own country is automatically always in the wrong, plus at least some of those old enough to have lived through the World Wars and remember what is was like when their own family or families they knew lost people killed. What I do not remember is anyone caring much about the Antarctic territories.

Antarctic Peninsula was no factor at all -short term. But it´s the major factor in the long term perspective.

But the question itself demands a broad discussion.

Let´s go on with that - it would be thrilling!

The outcome of the war was a British victory, back status quo, since US wanted it so, even if the task force had got stuck in a long attrition fighting before winning.

The pure actual military fighting shows that Argentina had no plans or resources for winning with strong claims after that on the Antarctic Peninsula, if GB (US) responded military. The military Junta did gamble on a British diplomatic solution -which was perfectly logical, but who could foresee such a bold British response?

Not the answer you're looking for? Browse other questions tagged united-kingdom argentina antarctica falklands-war or ask your own question.

17
What were Argentina's intentions for the Falkland Islanders?
10
Why did Argentina seize South Georgia immediately prior to the Falklands invasion?
43
Why didn't Britain's nuclear weapons deter Argentina from invading the Falklands?
14
Why did Argentina invade the Falklands when they did, rather than wait for the pending sale of the UK aircraft carriers to complete first?
2
What sort of cold weather clothing did they wear on the Ross expedition to the Antarctic?
4
What was the military strength of the participants in the Falklands conflict?
5
Why might one think that Australia gained independence from the UK in December 1920?
30
Why were Royal Navy ships forbidden to attack the ARA Veinticinco de Mayo in Argentinian waters?
1
Could there be frozen animals under Antarctica's ice sheets?