When and why was Seleucia ultimately abandoned?

The ancient Seleucia was founded along the Tigris river around the year 305 BC, and abandoned in 165 AD, due to the river mutating its course (Wikipedia).

However in 780 AD the Catholicos (=Patriarch) of Seleucia was the most important Christian authority, overseeing over a quarter of the world's Christians [2]. This fact alone suggests that the city was far from an abandoned site, and rather thriving.

Some sources refer to Middle Ages Seleucia as Seleucia-Ctesiphon. So let's assume that the Catholicos was based in Ctesiphon; the destruction of Ctesiphon was perpetrated by the invading Arabs, who later founded Baghdad. However Again there is an inconsistency, as the Arabs burned Ctesiphon (or Seleucia-Ctesiphon) in the VII century, and founded Baghdad one hundred years later. Where were the Catholicoi(?) based meanwhile?

All this is in disagreement with the most common view that Seleucia was abandoned because of Roman attacks and replaced by Ctesiphon in the II century. The neighboring Ctesiphon, was in turn abandoned in the VII century after the Arab invasion, while Baghdad was founded in the VIII century.

The short answer to your question is that the ancient Seleucia and the Medieval Seleucia are in fact two different cities.

The original Seleucia was built in 305 BC as the first capital of the Seleucid empire, as you found in your sources. This city was built on the western bank of the Tigris and was ultimately abandoned in 165 AD, when it was destroyed by the Roman general Avidius Cassius. That Seleucia was never rebuilt, and we have since uncovered a wealth of archaeological evidence from the site.

A little over sixty years later, the Persian emperor Ardashir I sought to rebuild the city of Seleucia, as part of his own empire. However, he built it on the opposite side of the river from the original Seleucia. This city was originally referred to as Veh-Ardashir, but it appears that this name fell out of use over time and the city was eventually referred to as Seleucia, even though it was a different city from the original Seleucia.

The city of Ctesiphon was yet another city, distinct from both Seleucias, built on the eastern bank of the Tigris river. In a religious context, however, these two cities together would have been known as Seleucia-Ctesiphon because they shared a single bishop.

To put all of this together on a single map, the three cities are shown in the map below: 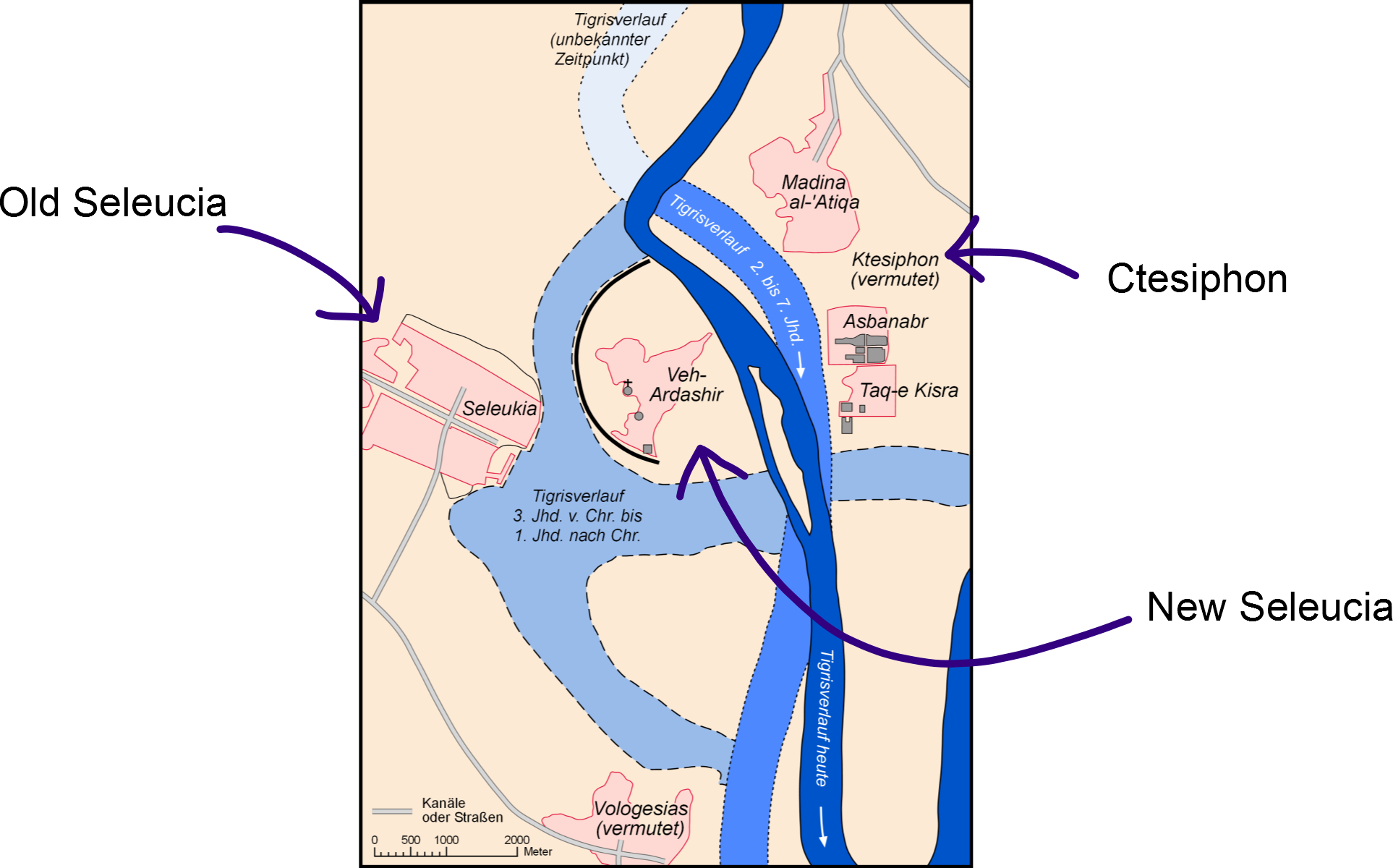 Sources: This University of Michigan page, and the Wikipedia pages for Seleucia, The Council of Seleucia-Ctesiphon, Al-Mada'in, and Ardashir I. The image was from the Seleucia Wikipedia page, with my own annotations.

Not the answer you're looking for? Browse other questions tagged middle-ages middle-east christianity iraq or ask your own question.

3
Middle east and North africa population during the high middle ages
12
Was the Iraqi Mukhabarat modelled on the German Reichssicherheitshauptamt, and in what ways?
36
Who believed the earth was flat?
2
What was the state of relations between Baathist Iraq and Taliban Afghanistan?
8
When was the weekend changed in Jordan?
10
Were the Hashemite kings of Iraq and Transjordan considered foreign?
8
Why was the city of Philippi abandoned?
9
How and when was the Temple of Trajan destroyed?