Where was the furthest extent of Arabian trade explorations?

Traders from Arabia travelled to and traded with Roman and Asian empires and this Nabataean Sea Merchants article. How far did Arabian traders travel - where was the furthest extent of their expeditions, particularly in Asia (or maybe Australia)?

It's not a full answer, but if you're interested by medieval Arabic travels, the unavoidable reference is Ibn Baṭūṭah. In his Rihla, he describes three travels he made during the 14th century : 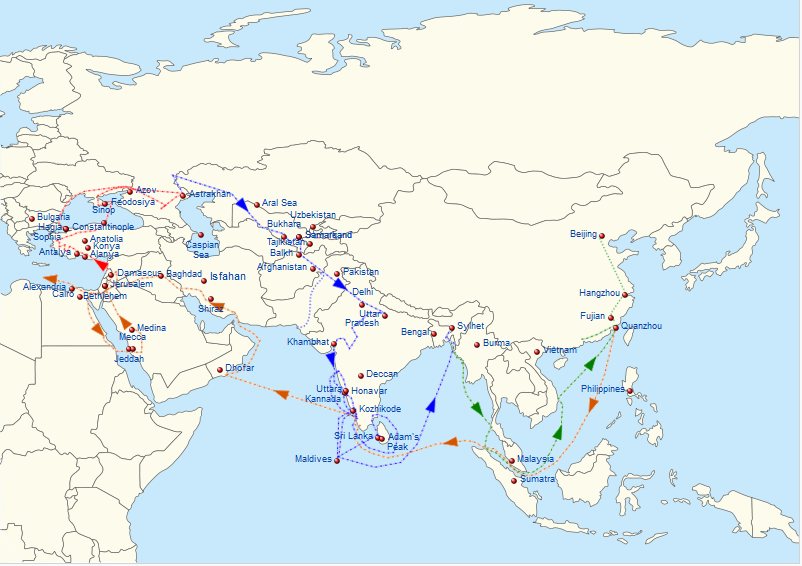 This text has been translated in many languages, so you probably can find a version in your preferred language. There is a French translation in la Pléïade, and a 19th French translation freely downloadable at the Université du Québec à Chicoutimi; I haven't found (yet) an English translation available on the web.

He mainly used the commercial routes, but he probably didn't to "the furthest extent of [Arabic] expeditions. According to the wikipedia page on spice trade, the route went as far East as Molucca.

25
How did Muslim traders raise investments given Islam's prohibition of usury?

9
How big was the kapa trade out of Hawaii?
13
Why was the spice trade so profitable in the 15th century?
20
To what extent were Polynesians in contact with one-another before European contact?
19
Did Greek traders visit the Philippines in the 1st century AD?
12
How extensive and developed was the ancient Kushite (Nubian) horse trade?
15
Where did the Roman money involved in the spice and luxury trade end up?
6
Was there trade among African empires?
3
Why didn't Indonesians/Indian Ocean traders bring marsupials to Asia and placental mammals to Australia/New Guinea?