Why did the Spanish take the island of Annobon in the Treaty of El Pardo in 1778?

The conditions of the Treaty of El Pardo (1778) have always been a mystery to me. From Wikipedia:

The Treaty of El Pardo was signed on March 11, 1778 between Queen Maria I of Portugal and King Charles III of Spain. The treaty aimed at resolving long-standing territorial disputes arising from non-observance of the terms of the Treaty of Tordesillas and subsequent treaties to resolve the matter. Most recently, was the continued strife at the southern tip of Portuguese advance into region of the Misiones Orientales and present-day Uruguay and parts of Paraguay, the Spanish–Portuguese War, 1761–1763 and the Spanish–Portuguese War, 1776–1777.

The main issue was the penetration by Portuguese Bandeirantes deep into the South American hinterland, in violation of the division imposed by the treaty of Tordesillas. The new treaty recognised the principle of uti possidetis, already followed in earlier treaties. However, doing so recognised Portuguese dominion over vast swathes of present-day Brazil, whereas the Spanish had stayed out of Africa in observance of the Treaty of Tordesillas. To compensate for this imbalance, Queen Maria agreed to cede the islands of Annobón and Bioko (Fernão Pó) to King Charles, as well as the Guinea coast between the Niger River and the Ogoue River. The island of Formosa (named Fernão do Pó during Portuguese rule) was officially renamed and recognized as Fernando Poo.

Now, this all sounds fine, except, looking at a map, it starts to make less sense: 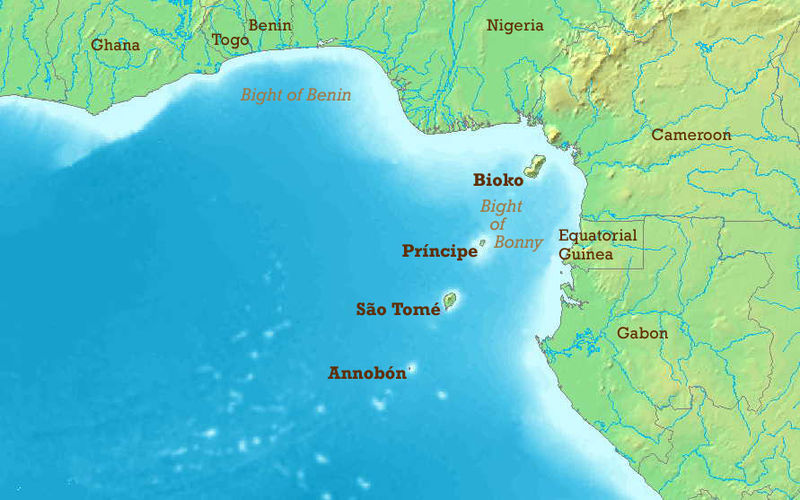 The Spanish decided to take Annobon instead of, say, Principe. Why? I understand they may have had a limited offer (maybe the Portuguese preferred to keep Principe, it was more valuable) but is this the only reason behind it?

It even led to Annobon being in a state of virtual anarchy for some time (due to rejecting the Spanish colonization and being hard to manage from such a large distance from the Rio Muni and Fernando Po colonies).

Can anyone shed some light on this subject?

It could well be that Annobon, being farther out from the two Bights, has better sailing conditions - more access to trade winds, less likely for fleets to be caught by a contrary wind against the two shores. Thus it is more convenient as a base for ships travelling on to the far east via Africa.

I think this says it all:

It even led to Annobon being in a state of virtual anarchy for some time (due to rejecting the Spanish colonization and being hard to manage from such a large distance from the Rio Muni and Fernando Po colonies).

Ceding any other island to the Spanish would have simply disrupted the management of the Portuguese colony, when there was another alternative.

The value to the Spanish of all the four islands was roughly the same, as their value lay in their proximity to the Guinea coast relative to South America or the Caribbean. Therefore the Spanish would not have had any particular preference.

However, it would have been important to the Portuguese to maintain the integrity of their colony, by preferentially ceding the outermost island to the Spanish.

Not the answer you're looking for? Browse other questions tagged 18th-century colonization spanish-empire treaties portuguese-empire or ask your own question.

15
How did former Spanish colonies in the Americas become so fragmented?
26
How did the gold of the new world cause the Spanish Empire to collapse?
32
Why was the Treaty of Versailles so harsh?
5
Why didn't the Great Awakening spread to the Spanish Colonies?
1
Did Taíno natives ever work Spanish galleons?
10
Why did the Roberts Treaty of 1833 have a Portuguese translation annexed to it?
8
Why didn’t the U.S. annex the entire Spanish East Indies at the end of the Spanish-American War?