Context for this 1871 humorous map of Europe?

The following map is from (circa) 1871, according to this source, and it was published in Bologna, Italy. Could you please provide some context for it? Parts of the map are self evident, as for example the reference to the Alabama Claims, but others not so much (the fashionable crocodile in Turkey, for example). 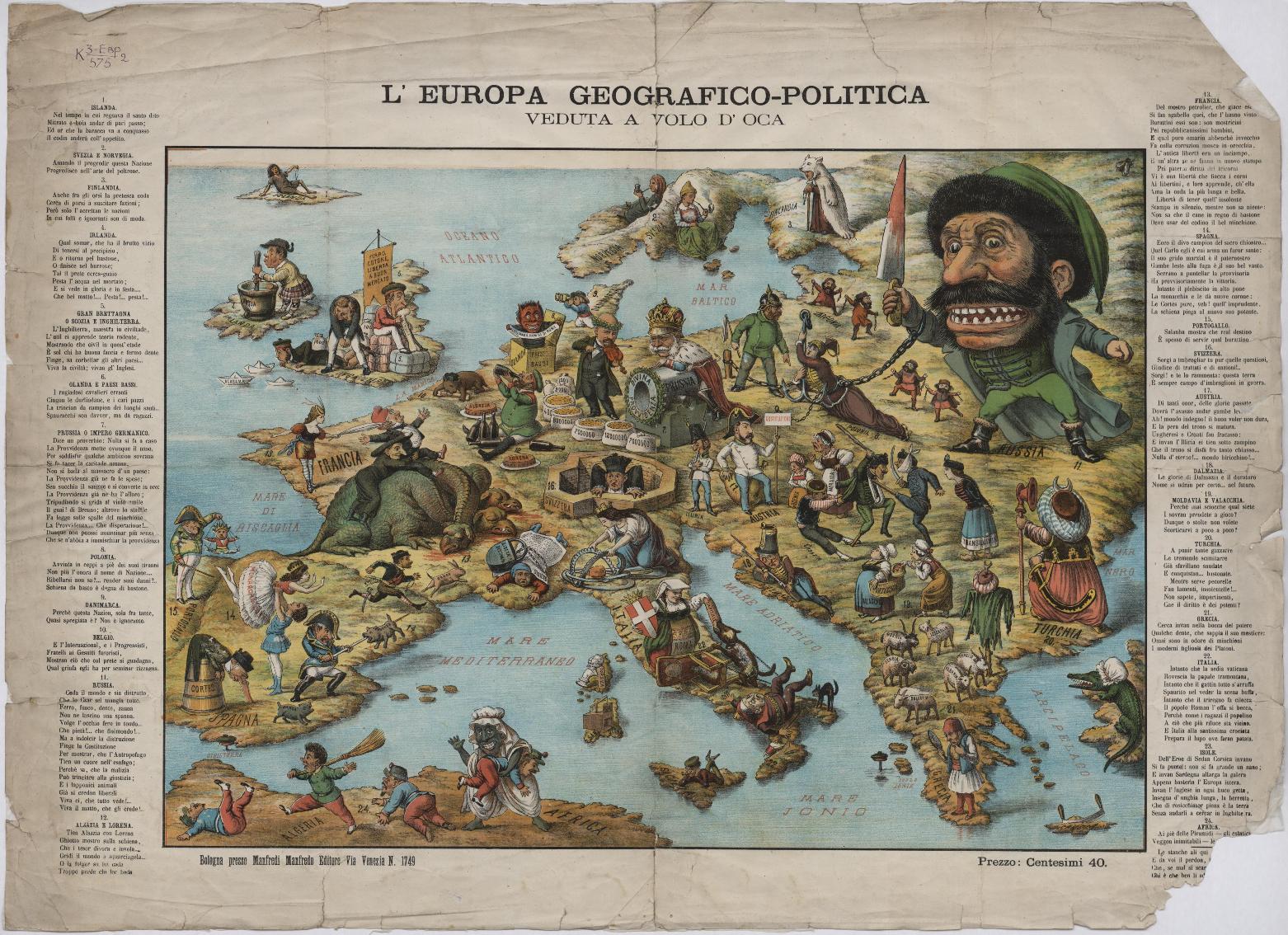 Larger version, from this blog post (a few other interesting maps there).

This is a rough translation (work in progress). Notice that the text is rhymed, and some of it (I find ) it is illegible.

4 Ireland \\ Like the donkey with the habit \\ to walk close to the cliff hedge \\ And either comes back because of the staff \\ or ends up down the cliff \\ Likewise the problem seeking priest \\ mashes water in the mortar; \\ And he can be seen in glory and joy \\ What a fool!... Lo mash! Mash!

If the meaning of 4. seems obscure, you are in good company. Perhaps it refers to the futility of Ireland's politics. Arguably the Catholic Irish did not approve the Italian conquest of the Papal States (1870).

5 Great Britain or Scotland and England \\ England, master of civilty \\ Gain teaches, (biting?) theory \\ Showing that civilized in this age \\ is only who has straight face and good tooth \\ She deceives and can trick the other countries \\ Long live the civilt; long live the English.

8 Poland \\ Tied in shackles, at the feet of her tyrants \\ The name of Nation honours her no more... \\ She can't rise up! She can't avenge herself \\ Who carries like a mule, deserves to be beaten

Poland is the woman chained to Austria, Prussia and the Russian Nobleman.

9 Denmark \\ Why this Nation, among many alone, \\ is despised? She's not an ignorant one

11 Russia \\ Let the world fall and be destroyed, \\ Let the Czar eat everything \\ Iron, fire, tooth and fang \\ Shall not leave an inch of it \\ The feral eye revolves around \\ What a pity!... what a rumpus!... \\ But to sweeten the destruction \\ There's now the Constitution \\ To show that the Autropofagus* \\ Has a heart in his esofagus; \\ [Because he knows that malice \\ can (illegible) justice] \\ And the animals from Lapland \\ Already see themselves as Liberals \\ Long live him, that sees everything!... \\ Long live the fool that believes to him \\

The Russian nobleman (I think) has Poland on a chain. At his feet, the serfs rejoice for the recent abolition of the feudal serfdom (Czar Alexander)

Could you please provide some context for it?

I think that it depicts Europe as seen by an Italian nationalist. The author obviously approves the recent (1870) Italian annexation of Rome. This is evident from what he says about "priests" and how he says that.

Italy is the woman with long hair and white/turquoise dress, laying down a bear trap. The woman in the centre is Rome, that embraces/shields herself the coat of arms of the Savoy kings (of Italy). She feeds bread to a dog who is chained to the Papal seat: it is in fact on this chain that the pope tripped.

The text about Italy is difficult to decipher. The last two verses are:

And Italy prepares the wolf to the most sacred Crusade, where they will hold a parade.

The French "monster" is dead (Sedan, 1870) and smaller monsters rejoice over this fact. One of them is clearly a priest, the other a republican. Great Britain is despised, probably for her meddling in Sardinia and Sicily (23)

The map is certainly filled with irony against other people struggling for their independence. Greece watches in a mirror looking for her long lost teeth; other nations in the Balkans are depicted as sheep: Serbia, Bosnia, Albania, Bulgaria

I think if there would be some Italian guy here and could translate all the sentences, it would be easier. Here's my try.

In Algeria the Arab man represents French problems there.

Of course Russia is bad so it is represented as an ugly butcher. Poland is divided by three states (notice chains).

There are fightings in Balkans. The man kicking is probably Romanian and his opponent is Hungary. They are fighting for Transylvania.

Rest of Balkans is still a part of Turkey, but they are guarded not by a shepherd, but a scarecrow. I think the crocodile represents Turkish control over Dardanelles, you can't cross river when there are crocodiles in it. They are slow on land, but very dangerous on water.

In Italy the Pope is overthrown from his chair by Savoy dynasty.

In Corsica there is still a monument of Napoleon.

In Portugal the king could be a military's puppet.

German sacks of money could be a French contribution after 1870 war, as there is a Prussian soldier "eating" Alsace and Lorraine and drinking French wine. Because the cannon has "Divina Providenza" written it can be reference to German claims in world or just Prussian in Germany.

The three-headed dragon in France could be monarchy (which is adored by clergy and nobility or bourgeois), but will be thrown by a woman, Marianne I think.

And as I wrote in my comment, such cartoon maps were very popular in 19th century, here and here (in the middle of the page) be the examples.

Not the answer you're looking for? Browse other questions tagged europe 19th-century maps or ask your own question.

1
What area of Los Angeles does this historical map depict?
14
What are the historical reasons for the conventional map orientation?
10
How common was it for Americans to visit Europe in the late 19th century?
1
What are the height units of contours on this WW2 topographic map?
10
Can anyone explain why the Scottish flag on this map from 1504 has a red cross on a white background?
5
Where to get historical Finland railways map for 1939 year?
15
What is the significance of 4200 BCE in context of farming replacing foraging in Europe?
44
What is the logic for the map maker classifying the map this way, specifically in Canada?
25
Was frequent bathing for personal hygiene in medieval Europe common or not?