Was Nicholas II Romanov the last king of Poland?

Nicholas II Romanov, the last Emperor of All-Russia, used also (among many others) titles: Grand Prince of Lithuania, and King of Poland.

The Wikipedia states he was "a titular" King of Poland. In the reference it is written:

In 1831, the Russian tsars were deposed from the Polish throne, but they soon took control of the country, ruling it as part of Russia, and abolished the separate monarchy. However, they continued to use this title. See November Uprising.

It is also noticeable that there were no "Poland" in Russia as result of January Uprising in 1863, but Vistula Province.

In traditional education in Poland children are thought that the last king of Poland was Stanisław August Poniatowski and Wikipedia also says he was the last king of Poland and Grand Duke of Lithuania (ended his reign in 1795, and Nicholas II in 1917), however, in the table in the very ending of the article, he was succeeded by three Emperors (Russian Tsar as King of Poland).

During the WW1, on November 5th, 1916, when all (Russian) Poland was conquered by Central Powers, the German and Austrian Emperors declared that they will grant Poland some autonomy. As this event is hardly known in Poland, this was probably the main factor that made the independent Poland two years later. However, a Kingdom of Poland was to be (re)created and as there was no king (so Tsar was not legal to Germans), but a Regency Council.

Was Nicholas II REAL king of Poland? It is open to interpretations. But IMHO, it was just a title taken by Tsars. There was no state called 'Poland' but fragments or partitions of original Poland, which were provinces/districts in Prussia, Austria and Russia.

Stanisław August Poniatowski was the last king (reign 1764-95) of independent Poland because, Poland ceased to exist as a state after 1795, until it become independent in 1918.

Nicholas II was only the last man to have title - 'King of Poland'. 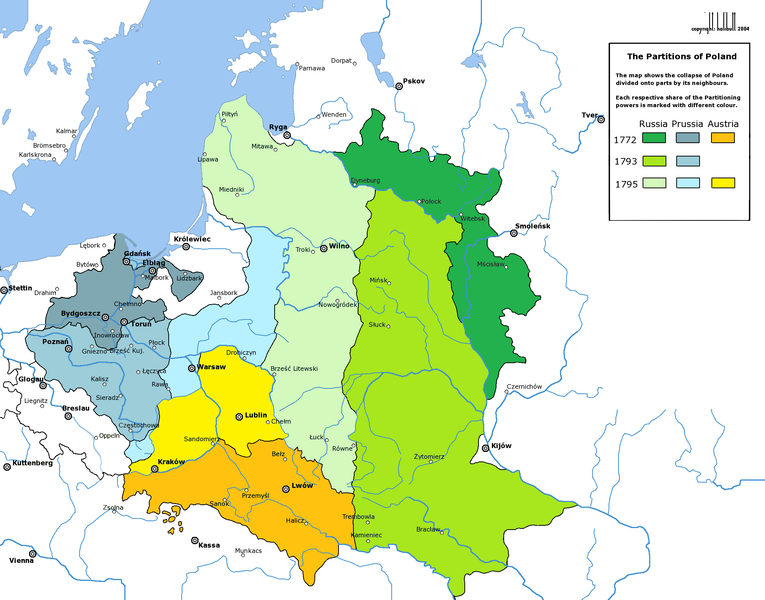 Poland ceased to exist after three partitions, in 1772,1793 and 1795, done by Prussia, Austria and Russia, Russia gaining the largest fragment.

At Congress of Vienna, in 1815, again Russia got the large part of Napoleonic Duchy of Warsaw as a "Kingdom of Poland" from Prussia. So, Congress of Poland was formed. It was a personal union of the Russian parcel of Poland with the Russian Empire.

So, from 1815, Tsars started using the tile "King of Poland", even though much part of original Poland remained under Prussia and Austria.

Later, after the two uprisings in 1830-31 and 1863-64 in so called Kingdom of Poland, its autonomy was stripped off and it was called Vistula land And in 1867 was made an official part of the Russian Empire. But still Tsars of Russia retained the title of "King of Poland".

So, Nicholas II, as a king of Poland, was NOT like what Henry VIII as a King of France was. France had her own Kings. English monarchs just made claims.

Nicholas II was not 'overthrown' but was force to abdicate after the February Revolution in March 1917 and later executed in July, 1918. It has nothing to do with Poland, directly.

The Duchy of Warsaw, after Napoleonic wars, got the name of the Kingdom of Poland. The entitlement was agreed upon by the Vienne Congress in 1815, not proclaimed by the Russian Czar.

The title of Nikolaj II was, according to picabu or wiki, was:

In this article, we can believe Wikipedia somewhat, for it has reference to a document from the year 1905

The name of the region remained the same until the revolution in 1917. And after it there was no such entity nor name. So Nikolaj II was the last Polish czar. And not the king.

The difference between these two titles is too complicated to be discussed here, but it is significant. For Russian czars were never kings of any land and refused to be ones, but they were czars - unlimited rulers. And Ponyatovsky was the last king.

During the Napoleonic wars Napoleon granted Poland a level of autonomy (duchy of warsaw) but it was still a puppet state of the French Empire. Many Poles backed Napoleon, up to 100,000 Poles served in the Grand Armee and King Poniatowski's nephew, Jozef Poniatowski even became a marshal of France. However after the fall of Napoleon the Grand duchy of warsaw, which included lands from Prussia and Austria as well, was left to question of what to do with it. Prince Jerzy Czartoryski, once a dear friend and right hand man to Tsar Alexander vied for the tsar to reclaim the lost territories of Poland and join them to the Russian Empire in a dynastic union, crowning himself "king of Poland". More or less that did happen, Alexander gained the lands of the grand duchy of Warsaw, however they did not reclaim the lands of Partitioned Poland. Alexander did Crown himself King of Poland. This gave rise the the Congress Kingdom of Poland. It was granted a degree of Autonomy; however it was still under the Empire. The congress Kingdom however became slowly liquidated and lost most of all its autonomy; many uprisings in Poland forced the Tsars to punish Polish lands and took away their autonomy and later discouraged Polish indentity and language. However during this whole time they still recognized that they did have Poland in the Russian empire and did style themselves legitimate kings of Poland. ( Russia did in fact have rule over the majority of Partitioned Poland). Most Poles however will say they don't recognize this because they viewed these time as times of supression and foreign rule, to a degree this is correct but one must also see that the Polish nation pre partition was a country with a broken ruling class, very corrupt and almost incapable of self rule which evidently helped lead to the partitions. In the end its a matter of opinion.

If anything, it was Michael II of Russia, not Nicholas II who was the last king of Poland. Michael II was formally the tsar of Russia between February 1917 and August 1917 when the Provisional government declared republic. And since Poland declared independence later, it was part of the game.

Not the answer you're looking for? Browse other questions tagged world-war-one russia poland monarchy or ask your own question.

16
How and why did Charles XII get to Poltava?
6
How did Poland fare under "personal unions?"
9
What was Poland's posture during the Seven Years' War?
6
Why was Poland able to resist the Swedish invasion during the Deluge, but not during the time of Charles XII?
6
Before the Great War, was the word "Poland" typically used to refer only to the Russian partition of Poland?
2
For how many years in the eighteenth century were Russian soldiers present within the Polish-Lithuanian Commonwealth borders?
3
What did Russia do in 1848 that could make the Austrians seek "brutal revanche" towards the Russians?
15
Why was Poland subject to much harsher Russification than Finland was?
8
Why was Austria given the best chunk in the First Partition of Poland, even while protesting it?
7
Did Nicholas II of Russia send telegrams demanding evacuation of Serbs?