What do “zones of influence” mean, according to the Treaty of Sevres after WWI?

See the following map from Wikipedia illustrating this. It seems that more than half of modern Turkey was intended as "zones of influence" before the Treaty of Lausanne. 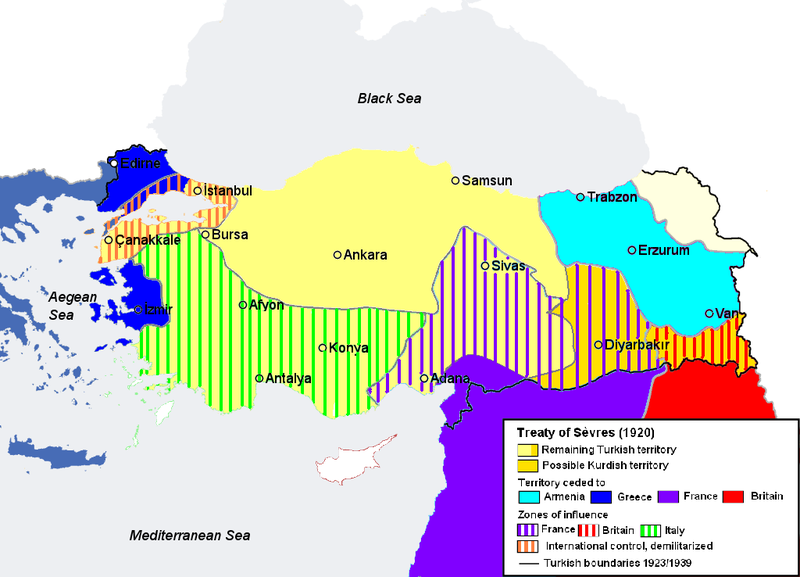 "Zones of influence" were primarily a means of dividing land between two or more colonising nations. This enabled these nations to avoid armed conflict while acquiring more colonies. China and Afghanistan are other examples of lands divided into zones of influence.

Carving a place "Zones of influence" doesn't seem to be that different from colonisation, and probably carried the same benefits that makes colonisation desirable - Access to cheap raw material, market for produced goods, population for military enlisting etc.

What would characterize "zones of influence" is that, legally, the territories dividied would not be ruled by the colonizing power. They would leave a nominally independent local power, but that power would be subordinated completely to the local representative (embassador, etc.) of the foreign power.

It was a form of "soft" colonization, which would ensure the colonizing power that natural resources and trade of the region would be in the hands of its companies and individuals, while not meddling with the internal politics (unless the local administration wanted to assert its independence, or was in danger of being topped by an hostile -to the foreign power- faction).

For example, with the treaty of Sevres, SW Turkey would have been legally a part of Turkey, but mining operations, critical infrastructures (like ports) and trade would have been controlled by the Italian government (which would have handed them to Italian corporations), and France could not make any intervention in that zone. That ruled out the possibility of the Turkish government playing them one against the other.

When The Ottoman Empire collapsed at the end of the First World War, Western Asia, was essentially, "up for grabs"-(geopolitically speaking or so the West European countries thought). Of all the areas of the Ottoman Empire, it was Western Asia-(what was called, "Asia Minor" or "Anatolia" during Pre-Ottoman times) which had the largest percentage of ethnic Turkish Muslims-(as well as other ethno-religious minorities, such as Kurdish Muslims, as well as Greek, Armenian & Assyrian Christians) residing in this region. The WW I victors, namely the British and the French, had established earlier "zones of influence" with the neighboring country of Greece, as well as having a strong partnership with Italy-(also a British and French ally during the First World War).

By establishing "zones of influence" within West Asia-(or the beginning point of the Middle East), the British and French could either directly occupy the Middle East by balancing their colonial power or (as the British would do during the reign of Egypt's King Farouk), would establish puppet regimes who were friendly to British and French colonial interests-(The "Our Man in x country" policy).

In the case of Western Asia, it was-(and is still), a land and region rich in waterways, as well as land resources, thus, an ideal center for trade/ commerce. For the British, the West Asia "zone of influence" would expand their colonial state and in turn their "influence" throughout the massive continent of Asia, while also being in close proximity to the beginnings of the African continent-(through Egypt). Instead of a defeated and politically beleaguered Turkish state continuing its own centuries old "zones of influence" throughout wider Western Asia, the French and particularly, the British, would emerge as the new colonial puppeteers.

By also allying with the Italians and the Greeks, the French and British could essentially, Europeanize the beginning point of Asia in commercial, military, diplomatic and even cultural terms. The 1920 Treaty of Sevres would help to pioneer the Modern "zone of influence" or "sphere of influence" concept, though it was, historically speaking, a short-lived policy that resulted in abject failure. The result, did not produce a stable and governable demarcating of British, French, Italian and Greek zones of influence, but, instead, unwittingly galvanized a rabid and ruthlessly determined Post-Ottoman Turkish Nationalist movement which would conquer every European zone of influence within Turkish West Asia, thereby establishing the Modern nation-state of Turkey in 1922.

Not the answer you're looking for? Browse other questions tagged 20th-century world-war-one middle-east treaties or ask your own question.

8
Did Germany have treaties imposed upon it after WWII that mirrored the weight of the Treaty of Versailles?
5
What was the contemporary popular opinion of the Anglo-Irish Treaty?
3
Was there relative peace in the Middle East before the end of the Great War?
8
What are the current obligations of Treaty of Lausanne?
16
Was it not clear to the WWI allies that they were over-reaching with the treaty of Sevres?
6
Why didn't the WWI Allies attack through the Vosges Mountains after 1915?
10
What is the earliest recorded example of an extradition treaty or law?
2
Did some chemical weapons from the military end up in private hands after WWI?