To my mind Fritz Lang's Die Nibelungen (1924) is a work of absolute genius, perhaps surpassing even Orson Welles' Citizen Kane (1941) in movie history. It is very rich, beautiful, yes tragic, and deep. When I was in school we would write essays to interpret the story as an allegory for doom brought by Germans onto recent history; when I last saw it it stroke me (also) as a relevant allegory for even more recent global environmental problems ...

Now my question is this: The movie is also rich in patterns, e.g. patterns decorating both interior walls and garments as in this scene ("blind loyalty"). I've been wondering for some time whether they were chosen by the director primarily because of historic veracity (an architect friend once told me that e.g. the inside walls of medieval Gothic churches used to be painted in bright colors) or for more pragmatic artistic reasons (they obviously add useful texture to black-and-white and black-and-yellow movie versions). 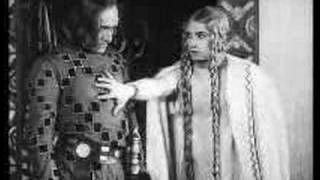 What evidence for deciding this question can be brought from the perspective of history?

The production designer for Die Nibelungen was the enormously creative Otto Hunte (b. 1881 d. 1960).

In this photograph he is seen standing at far right, next to Fritz Lang. He was also in charge of production design for Metropolis, Der blaue Engel, Die drei von der Tankstelle and other classics of German cinema, sadly also including the Nazi big-budget production Jud Süß.

In the group photograph, we can see clearly the striking geometric designs that he created for part 2 of Die Nibelungen. They employ a mix of concentric designs, diamond shapes, and figure-ground reversals.

To my unschooled eye, they appear to be severely simplified idealizations of Gothic or Gothic Revival Style. 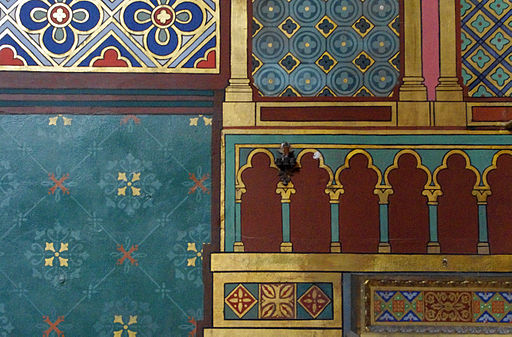 Hunte was a graphic artist with a consummate knowledge of light and shadow. A collection of 68 of his set drawings is shown on European Film Gateway, with about two dozen of them from Die Nibelungen. While none of them feature the striking wall patterns of the movie sets, I believe it is a safe assumption that Hunte both drew from historical medieval ornamental art and at the same time took care to maximize contrast so that they would come out as vivid as possible on black-and-white film stock.

The costume designer is usually credited as Paul Gerd Guderian. However, according to this weblog by British film maker David Cairns,

... Aenne Willkomm, brought in to design the Huns’ wardrobe, had been working in high fashion. She was recruited to help designer Paul Gerd Guderian, who was suffering from tuberculosis. Guderian actually died during production, leaving her to finish the film.

A book by someone named McGilligan is cited as the source. I would disagree with Cairns, however, that

While clearly everything in the film was done with an eye to how it would come across on the silver screen and historical accuracy was not the paramount goal, nonetheless the influence of medieval ornament and pattern on the costumes, too, is evident: 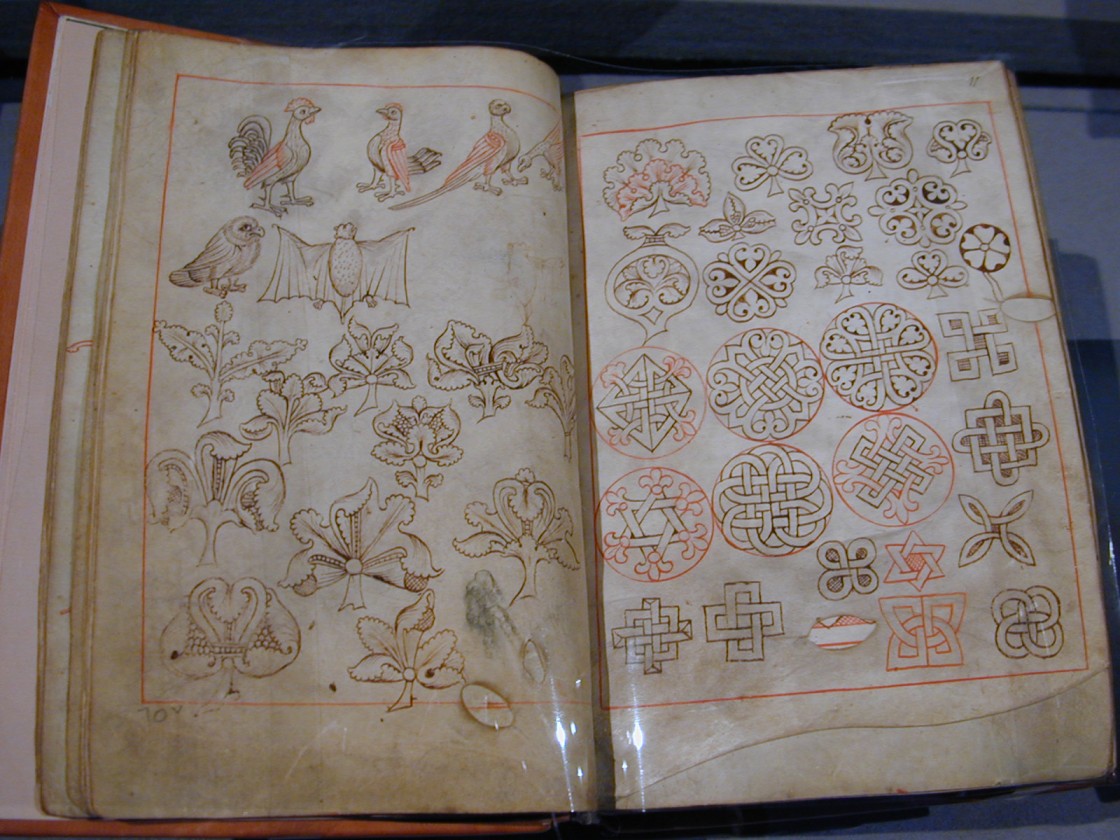 Compare these patterns to the photograph shown on Cairns' weblog. Whether one calls this "inspired by" or "based on" is secondary, I think. But of course, other influences such as Neue Sachlichkeit and the constructivism of artists such as El Lissitzky also played a part. (Compare Hunte's scene drawings to the art of El Lissitzky on the previous link.) The movie is sometimes mistakenly labeled "expressionist", but the expressionist era had already passed well into history by the time of its creation.

Die Nibelungen was a huge project for the Ufa production company. Entire forests with thirty-foot trees were installed on the set. A seventy-foot dragon with humans inside to move its limbs was built. Lang and his staff spent three months just meeting to discuss creative decisions and technical planning for the film. If something was big, it was too small. Lang would not settle for anything short of monumental.

Recently a restored and remastered copy of the film, based in part on recovered original camera stock, was released. It preserves the black-and-orange virage coloration and reintroduces some of the footage cut by the producers from part 2. A bloody saga of honor and loyalty, vengeance and downfall, which some critics have said prefigures National Socialism. Lang, however, hightailed it out of Germany as soon as Hitler had taken the reins of power. In a letter to film critic Lotte Eisner, he even hinted that the Huns who slaughter the decadent Burgundians may be an allegory for the proletariat overthrowing its oppressors.

Parts of the film, with its human-operated dragon and obviously artificial scenery, may appear ludicrous to modern audiences weaned on Hollywood CGI productions. But as a historical document, it is without parallel.

15
Why is such big density of churches in medieval towns?
10
What are the highest and biggest half-timbered buildings built during medieval era?
8
Did medieval Europeans really walk around barefoot in winter?
35
How were medieval castles built in swamps or marshes without draining them?
7
Why do old townhouses sometimes have a flat, windowless, undecorated wall on one side?
12
Did medieval people wear collars with a castellated hem?
2
What kind of clothing was worn in Mahgreb states circa the high medieval period?