Who won the wrestling match between Lincoln and Jack Armstrong? 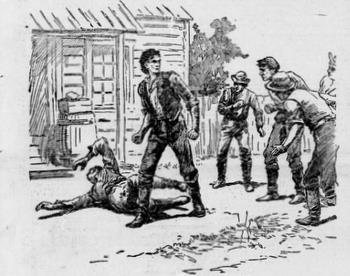 According to a site whose name is "Muscles of Iron", the above picture shows Lincoln after taking down “champion” Jack Armstrong at the general store in New Salem, 1831.

On the page where the picture is shown, it is written:

But, before anybody could take Lincoln up on his offer, Jack Armstrong yelled out, “Boys, Abe Lincoln is the best fellow that ever broke into this settlement. He shall be one of us.” Then, with a touch of dignity and class, Armstrong held his hand out to Lincoln and congratulated him for his victory. This was the beginning of a special friendship between these two powerful men, a friendship that would last until Lincoln’s death.

But, Wikipedia, in reference to that match, says:

His place with them was cemented when he engaged in a wrestling match with a local champion, Jack Armstrong. While Lincoln lost the match, he earned their respect. (My emphasis)

Therefore, since it seems that Wikipedia and Muscles of Irons, which show even a picture, report opposed versions about the result of that match, question is: Is there a reliable source that agrees with "Muscles of Irons"?

I suspect that there is no reliable answer; the point of the story seems not to be to report fact, but to establish that Lincoln was physically capable and emotionally agile enough to turn an adversary into a friend.

Jack Norton agrees that Lincoln won the match. Mr. Lincoln and Friends agrees, but they have a dramatically different play by play. Mr. Lincoln & friends admits that there are various tellings of the tale and provides footnotes for further research.\

The Claremont institute is on the "Lincoln Lost" side of the fence,

Although several conflicting eyewitness accounts of the match exist, the accounts generally agree that Armstrong narrowly escaped losing to Lincoln by some sort of sharp practice.

Abraham Lincoln in the classroom references both sides of the story, and names the eyewitness for one, which to my mind makes it much more credible.

6
Do photos of Wernher von Braun and Neil Armstrong exist? Have they ever met?
1
Are there any incidents of war / brutalities because of Football match other than the famous one between El Salvador and Honduras?
11
Did the USSR invite other astronauts of Apollo 11 besides Armstrong?
25
Who named the Democratic Party?
6
What evidence connects Aaron Kosminski to Jack the Ripper?
5
1900s Vacation between Germany and America
7
What was the impact of Fischer vs. Spassky 1972 on the relationship between the USA and the Soviet Union?
4
Who was Jack Hagler? As amended by chapter 87-24, Laws of Florida, this section shall be known and may be cited as the “Jack Hagler Self Defense Act.”
9
What is the connection between the rise of modern football in the UK and the shortening of the work week?