Why has Hainan been so little fought over?

There are two really substantial islands off the coast of China, namely Taiwan (Formosa) and Hainan. Whereas Taiwan has been occupied, colonised, renamed and fought over for the last 600 years, Hainan gets hardly a footnote in most histories. 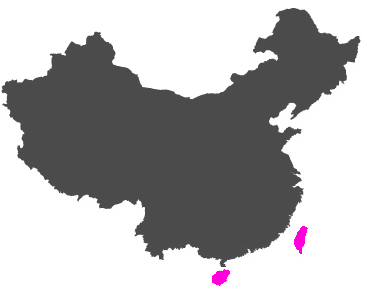 The Portuguese named Taiwan (for Western atlases and history books), the Dutch and Spanish colonised it (or started to), the Japanese occupied it for decades and finally and famously Taiwan was the last stronghold for anti-Communist forces escaping the mainland. In Hainan, nothing comparable occurred.

Superficially it might seem both islands' appeal to foreign powers would be roughly equal - both offer a substantial offshore base in a strategically vital area. And while Taiwan would have been handier for the Japanese, Hainan would seem to be more accessible for the European explorers and colonisers moving up from the South.

Wikipedia's page at least explains why Taiwan made a better base than Hainan for the Kuomintang but says nothing about why European invaders bypassed it.

Is it that Hainan lacks harbours or has no spices or other natural resources to interest invaders?

This is a good question that must come to many people's minds when they see the two very similarly sized (Taiwan only slightly larger) islands. The similarities are a even more numerous than the visual.

However, Taiwan has had far more strategic and economic importance, and Hainan only grows somewhat in importance in the 20th century.

This is not because of the reasons you suggested: lack of harbors or natural resources. Hainan, though seen as an "island at the end of the world" [6:229], and a "backward place of the Chinese empire" where exiles were condemned to go [4:385], it was close and accessible to the mainland (24km, vs 144km for Taiwan), has 68 harbors [4:391], and was a "treasure island" (宝岛) with some 30 important minerals [1:10] (especially iron ore that was most fully exploited under Japanese occupation [5:101]), in addition to being a good place for rubber (60% of all Chinese rubber production at some point [1:12]) and sugar production.

I would argue that the main reasons for the relative greater attractiveness of Taiwan to various powers, at least up to the 20th century comes from its location:

Other factors may include the relatively stable and early migration/control by the Chinese into Hainan (despite limited control over the Li in the mountainous areas) in 110BC [4:390], vs. first notice of Taiwan by Chinese imperial records in 230AD [3:35] with migration much much later. Early control and administration made Hainan less vulnerable to invasions. Hainan also fell under French "sphere of influence" in late 19th century which was recognized by treaties with the Qing and Japan, and perhaps saved it from the early 20th century turmoil (up to Japanese invasion) [5:93-95].

This situation all changes in the 20th century. The Japanese saw Hainan's naval importance for its southern advance [5:93] and kept it under full direct control instead of turning it over to Wang Jingwei's administration [5:99]. This is again true after WWII, as Hainan was among last territories to fall to the Communists with the massive naval attack in spring 1950, and later Hainan becomes a strategically vital area in tensions between China and Vietnam (west coast of Hainan has many naval basis) and as administratively connected to China's claims on the potentially petroleum rich reserves in the South China Seas [4:167]

Not the answer you're looking for? Browse other questions tagged china colonization asia political-geography or ask your own question.

27
Have there been any notable battles fought with steel vs. bronze weapons?
6
How has Chinese GDP as a percentage of world GDP changed over time and why?
3
Why was the Battle of Noryang fought?
10
Has there been other settlements in occupied territories in recent history?
24
Has Taiwan always been a part of China?
6
Why has Nepal never been conquered or colonized?
9
Has there ever been a situation where the “motherland” treated its colonies well anywhere in the world?