As possibly some of you remember early computers had very small human-machine interface and coding programs was done by cards like this one: 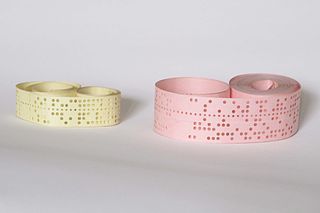 This invention of controlling machine using punched elements (having gaps or knobs) is older and was used in many cases like for workers' cards used to note their time of work, music boxes etc.

This invention could be made at first in Jacquard loom to control order of threads in different colours to make a pattern.

I'm sure I read also about other common use of this type (with gaps or knobs) of control machine, that was somewhat important in the industrial era, this could not be a steam engine, but I can't remember. What was other use of punched card (or a cylinder maybe) in industry?

(It was not what Wikipedia says:

In the late 19th century, Herman Hollerith took the idea of using punched cards to store information a step further when he created a punched card tabulating machine which was used in the 1890 U.S. Census.

I'm sure it was a large machine)

I believe the first "programmable" devices in common industrial use were the big industrial power looms in England in the late 18th and early 19th century. The Jacquard loom in 1801 was the first to use punched-cards for its programming.

Way over in Ukraine, Russian Semen Korasakov saw the potential of these cards for information storage and retrieval, and designed machines for this purpose in the early 1830s. Wikipedia claims that up to this time nobody was using the cards outside of the textile industry. Sadly, it appears that nobody outside of far eastern Europe heard of Karasakov's devices until the 20th century.

When mathemetician Ada Lovelace was helping Charles Babbage with his Analytical Engine design (the first known semi-practical programmable mechanical computing device design) in the 1830's, they borrowed the idea of programming it via punched-cards. Countess Lovelace went so far as to write down and publish an algorithm for it. Based on this, it is argued that she was the world's first computer programmer.

Jonathan Aylen says that steel mills were indeed using punched cards for programming before computers, and that the transition was so gradual that it is in fact hard to say exactly when computer steel mill control actually begain. So presumably the cards were eventually being used in mills other than just textile mills (eg: steel, lumber, paper) before computer controls were introduced. However, it appears that the idea of using them in computing devices is actually older than that.

12
What technological/economic factors triggered the Industrial Revolution?
2
What computer was used in 1958 for handwriting recognition by Dimond?
1
What name was given to Victorian era of confidence?
1
What percentage of British people during the industrial revolution were rich?
6
For steam trains, what kind of deaerator was used, if any?
14
What do historians mean when they talk about "supply side" and "demand side" explanations of the industrial revolution?
10
Was the name 'Valerie' used during the Regency Era (1811-1836)?
0
What heavy industrial work, if any, was done in USSR 1923-1927?