What is the earliest known account of the modern military salute?

The military salute, made with right hand to head of a soldier, seems to be a European tradition, however it is adopted by many armies in the world.

What are origins of this gesture?

I came across a theory that it comes from a medieval knights' gesture of opening the visor of their helmets. According to this source the purpose was to

reveal his identity as a courtesy on the approach of a superior.

But I'm not entirely sure this is correct, as the identity of a knight was clearly known from the coat of arms painted on his shield. This article says the reason could be that an inferior soldier (i.e. not a knight) opened his visor to his superior to identify himself, but

the modern form of salute is not recorded before the early 18th century.

(According to this Wikipedia article, the explanation that connects the gesture with medieval knights is somewhat questionable.)

The salute probably developed in response to a change in military headgear. After metal helmets fell out of favour, soldiers wore hats similar to those of civilians. Like civilians they raised their hats when greeting a superior.
By 1700 grenadiers were wearing tall, conical hats held in place with secure chinstraps that were difficult to raise in greeting. The men began to merely touch their hats as if intending to raise them. Soon other soldiers adopted the shako, busby or bearskin, all of which were held in place by a chinstrap. They, too, stopped raising the hat and instead merely touched its brim. This action was formalised as the salute in European armies by about 1780, and from them spread to the rest of the world.

This article is quite interesting, however not citing any sources and looks a bit like popular science, but for me is acceptable.

There could be a connection to ancient Roman salute and greeting to show empty (ie. without weapon) hands, which we probably still use in a handshake gesture.

This confirms yet another source, saying that

One theory is that it came from Roman soldiers' shading their eyes from the intense light that was pretended to shine from the eyes of their superiors.

(how do we know it was from Romans not eg. Greeks?)

The most widely accepted theory is that it evolved from the practice of men raising their hats in the presence of officers. Tipping one's hat on meeting a social superior was the normal civilian sign of respect at the time. [emphasis mine]

I disagree it's most widely accepted, as shown earlier.

At first I wanted to ask "what are the origins of saluting", but it seems there is no good or sure answer for this. So my question is: What is the earliest known account of the modern military salute? I'm not asking when it was introduced, but for the earliest known account. As written above, the early 18th century would be the date, but is there any more information? Or maybe there is an earlier historical source?

The origin of the Hand Salute is uncertain. Some historians believe it began in late Roman times when assassinations were common. A citizen who wanted to see a public official had to approach with his right hand raised to show that he did not hold a weapon. Knights in armor raised visors with the right hand when meeting a comrade. (Paragraph break here is mine, to highlight the answer to the question)

This practice gradually became a way of showing respect and, in early American history, sometimes involved removing the hat. By 1820, the motion was modified to touching the hat, and since then it has become the Hand Salute used today.

Obviously, this manual is discussing the custom in the US military. But the evolution of the gesture as stated there was not confined to the United States, and is arguably applicable to military forces at large.

Interestingly, as I was finishing an edit to this answer after posting the source, I saw a notice that another answer had been posted in the interim while I was editing. The answer cites the RAF site, which also gives the same approximate date of "early 19th Century", thereby confirming this last point.

Although Wikipedia cavalierly brushes off the British and US military manuals, such official documents as the one displayed here are generally quite well researched by serious historians, and/or based on known military traditions, and in a court of law, such documents are often considered substantial evidence. Regardless, both the US and British military references agree that the custom first arose in the early 19th century.

Somebody who will provide similar answer, with dated primary sources, will receive additional bounty.

This drawing from Wikipedia shows two British soldiers (an officer and a sergeant) in 1848. Please note he's saluting with the left hand. 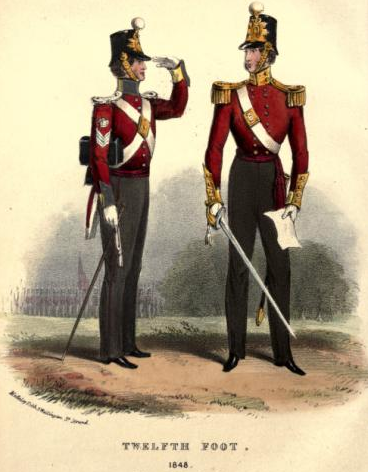 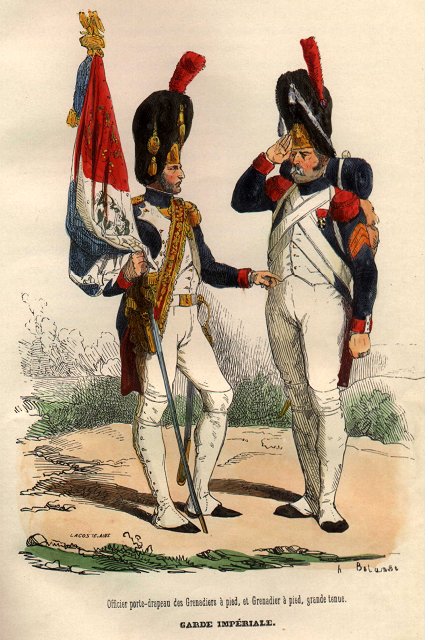 Sources referring to older times I could find seem to look differently (this painting is by E. Percy Moran, painter who however lived in 19th/20th centuries, so this does not count as the oldest one): 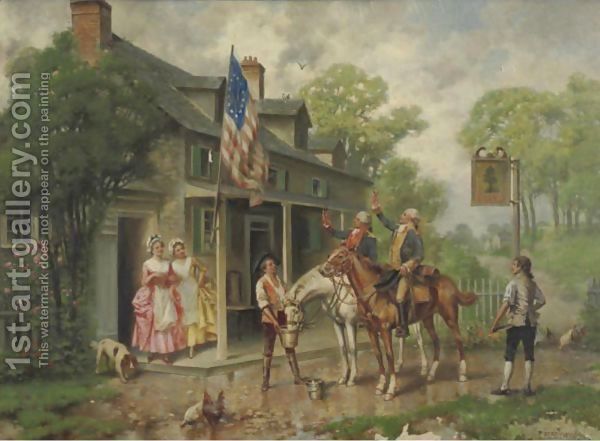 Anyone who will find a primary source dated before 1840s., will receive the bounty. The oldest source is the winner.

During the 17th Century, military records detail that the 'formal act of saluting was to be by removal of headdress' For some time after, hat raising became an accepted form of the military salute, but in the 18th Century the Coldstream Guards amended this procedure. They were instructed to 'clap their hands to their hats and bow as they pass by'. This was quickly adopted by other Regiments as wear and tear on the hats by constant removal and replacing was a matter of great concern. By the early 19th Century, the salute had evolved further with the open hand, palm to the front, and this has remained the case since then.

Not the answer you're looking for? Browse other questions tagged military tradition or ask your own question.

22
What factors enabled Europe to conquer almost the whole world?

5
What are the modern roles of brigadier generals and commodores?
15
What are the origins of sizing a squad in modern foot drill?
4
Are there any specific events which grants a soldier permission to execute a prisoner on sight? (Like in the movie: Fury)
0
What is the history of organizing militaries primarily through semi-permanent units as opposed to individual positions?
8
What branch of the military wore this uniform?
16
What was the fastest military draft in the United States?
10
What murals and decor might have been present in the earliest Sumerian temples?