For questions regarding the overseas empire established by Britain, beginning with England's overseas colonies and trading posts in the late 16th and early 17th centuries, and reaching a quarter of the Earth's land surface by 1922. Domestic British questions should be directed as United-Kingdom, Britain, England, Scotland, Wales, or Ireland depending on the subject.

Aside from Anglo-Norman expansion into Wales and Ireland, the British Empire started with England's overseas colonies and trading posts established in the late 16th and early 17th centuries. At its height, it was the largest empire in history and, for over a century, was the foremost global power. By 1922 the British Empire held sway over about 458 million people, one-fifth of the world's population at the time, and covered more than 33.7 million square kilometres (13 million square miles), almost a quarter of the Earth's total land area.

During the Age of Discovery in the 15th and 16th centuries, Portugal and Spain pioneered European exploration of the globe, and in the process established large overseas empires. Envious of the great wealth these empires bestowed, England, France and the Netherlands began to establish colonies and trade networks of their own in the Americas and Asia. A series of wars in the 17th and 18th centuries with the Netherlands and France left England (and, following the union with Scotland in 1707, Great Britain) the dominant colonial power in North America and India.

The loss of the Thirteen Colonies in North America in 1783 after the American Revolutionary War deprived Britain of some of its oldest and most populous colonies. British attention soon turned towards Africa, Asia and the Pacific. Following the defeat of Napoleonic France in 1815, after [union with Ireland](http://en. wikipedia.org/wiki/Act_of_Union_1800), the United Kingdom enjoyed a century of almost unchallenged dominance, and expanded its imperial holdings across the globe. Increasing degrees of autonomy were granted to its white settler colonies, some of which were reclassified as dominions.

Military and economic tensions between Britain and Germany were major causes of the First World War, during which Britain relied heavily upon its empire. The conflict placed enormous financial strain on Britain, and although the empire achieved its largest territorial extent immediately after the war, it was no longer a peerless industrial or military power. The Second World War saw Britain's colonies in South-East Asia occupied by Japan, which damaged British prestige and accelerated the decline of the empire, despite the eventual victory of Britain and its allies. India, Britain's most valuable and populous possession, was given independence two years after the end of the war. After WW2, as part of a larger decolonisation movement, most of the territories were granted independence, ending with the handover of Hong Kong to China in 1997. 14 territories remain under British sovereignty, the British Overseas Territories.

An anachronistic map showing all territories that were ever a part of the British Empire: 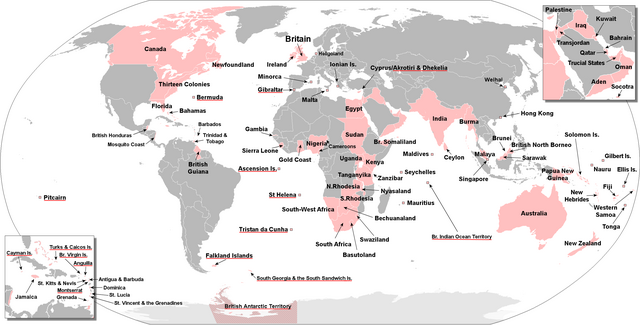 Why was Britain willing to return Hong Kong but not Gibraltar?

Why did a young George Washington sign a document admitting to assassinating a French military officer?

Is the photograph "England’s Revenge in India" real, staged, or fake?

Why were slave owners even offered compensation via the 1837 Act if they'd lost the power in parliament to stop abolition in 1833?