The Cold War was a continuing state of political and military tension from the 1940s to the early 1990s between the Western world, led by the United States and NATO allies, and the Communist world, led by the Soviet Union, its satellites and allies. The Cold War never saw direct military action, since both sides' nuclear weapons would have guaranteed "mutual assured destruction". Cycles of relative calm were followed by high tension and the threat of war.

The Cold War (Russian: холо́дная война́, kholodnaya voyna) was a continuing state of political and military tension from the 1940s to the early 1990s between the powers of the Western world, led by the United States and its NATO allies, and the Communist world, led by the Soviet Union, its satellites and allies. This began after the success of their temporary wartime alliance against Nazi Germany, leaving the USSR and the US as two superpowers with profound economic and political differences. The post-war recovery of Western Europe was facilitated by the United States' Marshall Plan, while the Soviet Union, wary of the conditions attached, declined and set up Comecon with its Eastern allies. The United States forged NATO, a military alliance using containment of communism as a main strategy through the Truman Doctrine, in 1949, while the Soviet bloc formed the Warsaw Pact in 1955. Some countries aligned with either of the two powers, whilst others chose to remain neutral with the Non-Aligned Movement.

The Cold War never featured direct ("hot") military action, since both sides possessed nuclear weapons, and because their use would probably guarantee their mutual assured destruction. Cycles of relative calm would be followed by high tension which could have led to war. The most tense involved:

The conflict was instead expressed through military coalitions, strategic conventional force deployments, extensive aid to states, espionage, propaganda, arms races, appeals to neutral nations, rivalry at sports events, and technological competitions such as the Space Race. The US and USSR fought proxy wars of various types: in Latin America and Southeast Asia, the USSR assisted and helped foster communist revolutions, opposed by several Western countries and their regional allies; some they attempted to roll back through subversion and warfare, with mixed results. To alleviate the risk of a potential nuclear war, both sides sought détente in the 1970s to relieve political tensions.

In the 1980s, the US's Reagan Doctrine increased diplomatic, military, and economic pressures on the Soviet Union at a time when the nation was already suffering economic stagnation. In the late 1980s, Soviet President Mikhail Gorbachev introduced liberal reforms of perestroika ("reconstruction", "reorganization", 1987) and glasnost ("openness", ca. 1985). This opened the country and its satellite states to a mostly peaceful wave of revolutions in 1989 which culminated in the collapse of the Soviet Union in 1991, leaving the United States as the dominant military power. The Cold War and its events have left a significant legacy, and it is often referred to in popular culture, especially in media featuring themes of espionage and the threat of nuclear warfare. 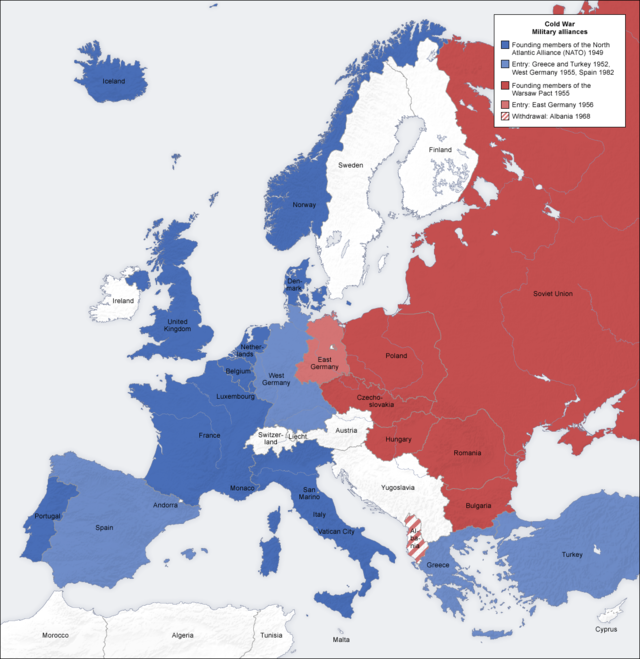 Why didn't the US and USSR jam each other's early-warning radar?

Why didn't the US and USSR jam each other's early-warning radar?

Why were there no nuclear detonations in 1959?

Has there ever been a cold war other than between the U.S. and the U.S.S.R.?

Why was the Cold War carried out over the whole world instead of between Siberia and Alaska?