The Early Modern period is generally considered to start at the Renaissance and discovery of the New World (circa 1500) and end around the Age of Revolutions (circa 1800). It is the first part of the most recent of the three major ages of history (Classical, Medieval and Modern).

The Early Modern period is generally considered to start at the Renaissance and the discovery of the New World (circa 1500) and end around the Age of Revolutions (circa 1800). It is the first part of the most recent of the three major ages of history (Classical, Medieval and Modern).

From a global standpoint, the most important feature of the early modern period was its globalising character — it witnessed the exploration and colonisation of the Americas and the rise of sustained contacts between previously isolated parts of the globe. The historical powers became involved in global trade; the Columbian Exchange — of animals, plants, culture, slaves, colonists, communicable disease, and ideas between the Old and New Worlds — greatly affected almost every society on Earth and was one of the most significant events concerning ecology, agriculture and culture in all of human history, with the resulting collapse in Native American populations potentially even contributing to the Little Ice Age.

Early modern Europe witnessed the decline of feudalism and includes the Reformation, the Thirty Years' War, the Commercial Revolution, and the Golden Age of Piracy. Capitalist economies and institutions became more sophisticated and globally articulated. This process began in the mediæval North Italian city-states, particularly Genoa, Venice and Milan. The early modern period also saw the rise and beginning of the dominance of the economic theory of mercantilism. It also saw European colonialism result in the spread of Christianity around the world; European colonisation dominated the early-modern history of the Americas. African colonialism tended not to occur until after the Age of Revolutions with the Scramble for Africa (1881–1914), so sub-Saharan Africa was dominated by the autochthonous Benin, Dahomey and Ashanti Empires, aside from South Africa, which was effectively being colonised under the Dutch East India Company.

In the Near East, this period covered the growth and stagnation of the Ottoman Empire, with the Safavid Empire ruling over Persia and its neighbours; further afield, the Mughal Empire ruled much of southern Asia and other descendants of Genghis Khan and heirs to his empire ruled much of Central Asia. In China, however, the Mongol Yuan Dynasty had been replaced in 1368 by the Ming Dynasty, described as "one of the greatest eras of orderly government and social stability in human history"; by the 16th century the Ming economy was stimulated by trade with the Portuguese, the Spanish, and the Dutch. The Azuchi–Momoyama period in Japan saw the Nanban trade after the arrival of the first European Portuguese; this was followed by the Edo period of the Tokugawa shōgunate, while the Joseon Dynasty ruled Korea. 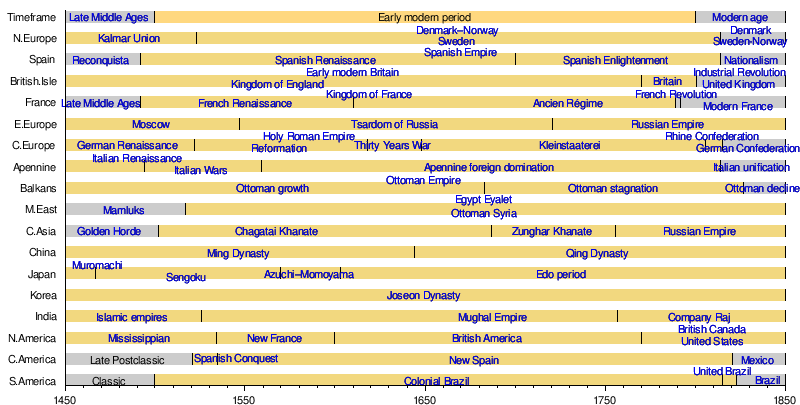 Is it true that slavery was endemic in Sub-Saharan Africa previous to the establishment of the trans-Atlantic slave trade?

Has an heir ever made the country believe the current ruler died in order to take over the throne?

Did slaves have slaves?

Did slaves have slaves?