The Middle Ages is a periodisation of European history, encompassing the period from the fall of the Western Roman Empire in the 5th century to the Renaissance in the 15th century.

The Middle Ages (adjectival form: medieval or mediæval) is a periodisation of European history, encompassing the period from the 5th century to the 15th century. The Middle Ages follows the fall of the Western Roman Empire in 476 and precedes the Early Modern period. It is the middle period of a three-period division of Western history: Classical, Medieval and Modern, reflecting the view that this period was a deviation from the path of classical learning, a path later reconnected by Renaissance scholarship.

In the Early Middle Ages the trends of Late Antiquity — depopulation, deurbanisation, and increased barbarian invasion — continued. North Africa and the Middle East, once part of the Eastern Roman (Byzantine) Empire, became Islamic. The Migration Period or Völkerwanderung was a period of intensified human migration around AD 400 to 800 with Germanic peoples moving into formerly-Roman territories, then being pushed west by Huns, Avars, Slavs and others. Later in the period, the establishment of feudalism allowed a move away from subsistence agriculture. There was sustained urbanisation in Northern and Western Europe.

During the High Middle Ages (c. 1000–1300), Christian-oriented art and architecture flourished and The Crusades were mounted to recapture the Holy Land from Muslim control. The influence of the emerging nation state was tempered by the ideal of an international Christendom. Codes of chivalry and courtly love set rules for proper behavior, while the Scholastic philosophers attempted to reconcile faith and reason. In a kind of reverse of the Migration Period, the Ostsiedlung saw Germanic peoples settle across Central and Eastern Europe, broadly from Slovenia to Estonia, and eastwards into Transylvania.

Outstanding achievement in this period includes the Code of Justinian, the mathematics of Fibonacci and Oresme, the philosophy of Thomas Aquinas, the paintings of Giotto, the poetry of Dante and Chaucer, the travels of Marco Polo, and Gothic architecture, particularly of cathedrals such as Chartres. The establishment of castles and universities was also notable in this period. 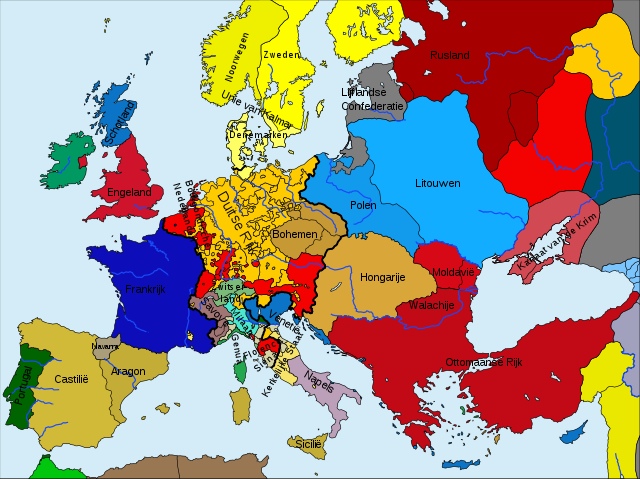 How were siege ladders used to attack medieval castle walls?