Some people think that ancient Iranians (unlike Iranians today) were white and had green/blue eyes and blonde hair.

I was wondering if there is any evidence how Cyrus the great looked like and if he saw the Iranians of today, would he be surprised that the majority of Iranians do not share his eye/hair/skin color?

For Cyrus specifically, the closest to a contemporary image I could find is this bas-relief found at Pasargadae. I think the best we can really draw from it is that he most likely had a beard. There isn't really any other racially identifying characteristics, and its monochrome so you can't really guess at the hair or skin color that is being portrayed. 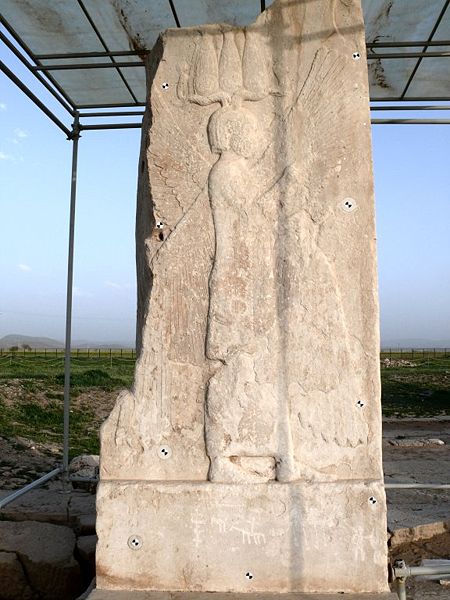 As for the ancient Iranians, our first record of them moving into their ancestral homeland is around 800 BC. At that point they likely physically resembled other early Indo-Europeans. The question is what that was.

It is surprisingly difficult to find references to studies of physical appearance outside of sketchy sites pushing racial agendas. What I did dig up tended to agree that skin and hair color appears to have undergone a surprising amount of selection pressure, meaning that these would be among the absolute first features to evolve to match what works best at the latitude a people are living. So skin color is actually about the worst thing to look at to ascertain relations between peoples.

The best I was able to dig up was this Science story. I could be misinterpreting, but it appears to be saying that the PIE people who moved into Europe carried multiple light-skin traits, one of which nearly disappeared in central Europe, but later came back into prominence amongst those that proceeded into northern Europe. The PIE people also appeared to have a tendency to be a bit taller.

Exactly how fast this process evolves I'm not sure. However, Cyrus was only about 2 centuries removed from the Iranian descent into their homeland, so I'd think it fairly likely he was a bit fairer than your typical human being living in the subtropics. But we really don't know.

Not the answer you're looking for? Browse other questions tagged ancient-iran or ask your own question.

2
What does “the anointed of the Lord” mean?
1
How old was Bagoas when he met Alexander the Great?