How effective were peace walls in Northern Ireland at reducing violence?

During the Troubles, a series of peace walls (or lines) were erected mostly in Belfast but also in some other towns separating mostly Catholic from mostly Protestant neighborhoods under a stated purpose to reduce violence.

While I'd like to leave ethical implication of such barriers outside the scope of this inquiry, my questions is: Are there metrics to attest to the effectiveness of those walls/fences in actually reducing violence? I understand it's impossible to accurately ascribe any change in social metrics, such as violence rate, to any single policy (correlation is not causation) but some high level comparison before and after can be made as a heuristic in gauging effect.

There are anecdotal accounts but I've not found any statistics

The Observer, Northern Ireland. Belfast, divided in the name of peace. 22 Jan 2012:

Alexandra Park was divided by a "peace wall" on 1 September 1994, the day after the IRA declared its historic ceasefire. Throughout the Troubles, it had been a flashpoint for sectarian conflict, a fiercely contested space where regular pitched battles broke out between loyalists and nationalists. "There was hand-to-hand fighting down there," says Sam Cochrane, an ex-political prisoner turned community activist from nearby Tiger's Bay, a fiercely loyalist neighbourhood. "Several young lads were carted off to hospital with serious head injuries from slates. Sometimes there was shooting."

The barrier, which grew over the years from a high fence to a solid steel structure, stopped the violence and made the people who lived in the houses around the park, and whose homes were often attacked, feel a whole lot safer. Like the majority of the peace walls in Belfast, it was erected at the request of locals.

"It was a shock to me when I first moved to Belfast to realise that the walls are actually community-driven in the main," says Orna Young, who grew up across the border in County Louth but has settled in Belfast, where she works for the Institute for Conflict Research. "When they were built, people often saw them as progress, as an important breakthrough. They felt safer.

Al Jazeera, Peace in Northern Ireland: A model of success? 'Peace walls' and the Belfast agreement have brought temporary calm, but are not a solution for the long term (Opinion piece)

The peace walls, like the Belfast Agreement itself, have brought an important measure of temporary peace to Northern Ireland. Paramilitaries from the Catholic and Protestant communities are no longer killing each other. However, neither the walls nor the agreement resolves the long-term future of the people of Northern Ireland.

There was an interesting study by Belfast University in 2015 of public attitudes to peace walls in their local community. It doesn't provide statistics about effectiveness in terms of reducing acts of violence but does give some clues about local public perceptions of the purposes of the walls and consequences of their removal. For example: 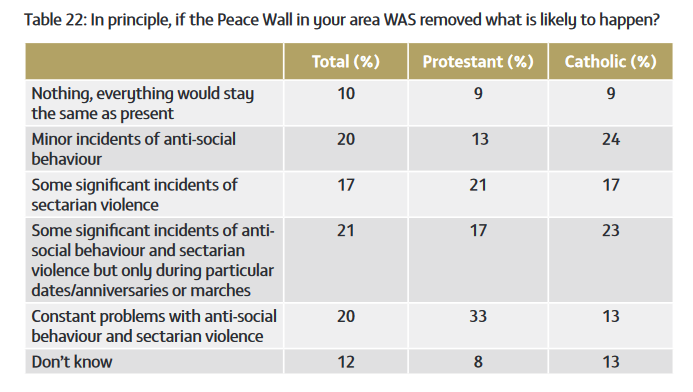 From what I've read, the peace walls were erected piecemeal, mostly in response to local residents concerns. They were erected as a temporary and very local measure - although they have become much more permanent than their instigators originally seem to have anticipated.

This makes it unlikely that they were intended as part of a systematic overall solution to the broader conflict between nationalists and loyalists in Northern Ireland.

The broader "troubles" have waxed and waned many times in the last half-century or more and the precise effects of specific events and actions may be very hard to objectively disentangle.

If we accept the above, we should probably not expect the peace walls to have an easily measurable effect on overall levels of violence across the whole of Northern Ireland (and beyond).

Not the answer you're looking for? Browse other questions tagged northern-ireland or ask your own question.