Was there a tax in the fifties for British citizens traveling abroad?

I have found a dialog in Roberto Rossellini's 1954 film Journey to Italy where the character played by George Sanders says it's expensive to stay abroad too much. That would seem natural, only the spending mentioned is explained as being determined by the British government. 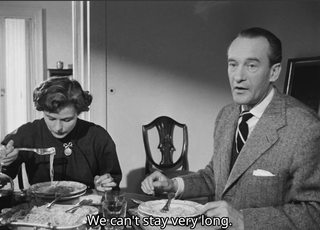 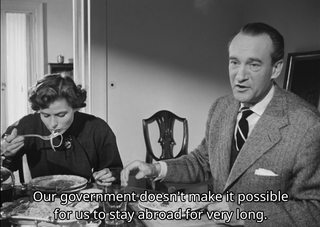 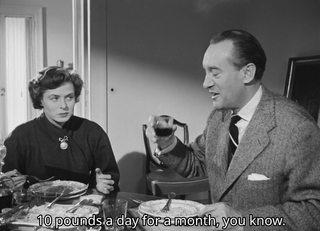 Our government doesn't make it possible for us to stay abroad long.

Ten pounds a day for a month, you know.

That doesn't seem to be a joke. The film is realistic enough, this is not a poetic license or fantasy. The character in the movie is a well-to-do businessman, that daily sum is not his salary, it looks more like a tax the government might impose.

What kind of sum these "10 pounds a day for a month" could be?

What is this about?

Currency restrictions existed between 1939 and 1979.

The main goal of these restrictions after 1945 was to insure that enough foreign exchange was available to finance needed imports from non-sterling areas.

This meant that sterling currency that could be exchanged to foreign currency was greatly limited.

There were many exceptions and special rules, so the named sum is realistic.

In the 1960's, only package tours were really possible, since foreign exchange was needed to finance imports.

Parliament: OVERSEAS TRAVEL ALLOWANCE (Hansard, 19 June 1967)
...
Of course, it fell to the Tories in the early 1950s virtually to abolish the nonsense inaugurated by the late Lord Dalton and Sir Stafford Cripps after the war in trying to restrict what British citizens should spend abroad. We abolished it. We kept a notional limit of £250 per person per annum on the travel allowance, but anybody could have more if he wanted it.

On 20th July, 1966, the Prime Minister decided, for no economic reason as far as I can tell, to impose a £50 limit on the travel allowance for British citizens abroad. That £50 was computed thus. The total number of British citizens travelling outside the sterling area was divided into the aggregation of expenditure and it was decided that the average expenditure per person was a trifle less than £50. The Chancellor therefore decided on a £50 limit.
...
Third, it is clear that the £50 allowance greatly restricts the choice of places where British tourists can stay. The hon. and learned Gentleman may not be aware of it, but I have been looking at a booklet published by Sir Thomas Cook & Son which shows that British tourists are restricted to relatively modest hotels costing less than £3 a day. If they want to go to a better hotel, they can afford to stay for only one week. For example, France, Italy and Switzerland are very expensive countries, and many British tourists find themselves in difficulty. In Lucerne, out of 16 hotels listed, in seven of them a British tourist can only afford to stay for one week. Similarly, in Greece there are 22 hotels shown in Thomas Cook's booklet, in 12 of which British tourists can only stay for one week, the reason being that many of the hotels cost a little more than £3 a day.
...

There were some Monty Python sketchs about this topic, where the customs man asks the traveler where they got the money (foreign exchange) to buy the goods that the traveler was bringing back.

Just to precisely answer the question,

Was there a British tax for British citizens staying abroad in the fifties?

No, there was absolutely no tax.

The line of dialog is referring to the limit on how much could be spent abroad.

(Via the limit on exchanging currencies.)

Do note that furthermore, the limit mentioned was actually quite high.

Not the answer you're looking for? Browse other questions tagged travel money great-britain movies 1950s or ask your own question.

2
Was there a tax advantage for ex-pats to stay out of the UK, even for brief visits?

8
What was the typical range of travel of a Pennsylvanian resident for everyday life in the late 18th early 19th Century Pennsylvania?
10
How common was it for Americans to visit Europe in the late 19th century?
14
What was the perception of the average British person of the Boston Tea Party?
25
Was it possible for a young Japanese woman to end up enslaved in Great Britain in the mid-1600s?