How did Porfirio Diaz leave Mexico for Europe?

As I understand it, Porfirio Diaz departed Mexico for Europe soon after surrendering the presidency, sometime around 1911. I seem to remember that he departed on a German passenger liner. Can that be confirmed, and a name of the liner and destination be provided?

The ship was the SS Ypiranga, which was indeed a German ship (although it was at that point a cargo-steamer, not yet a passenger liner). Díaz departed from the port of Veracruz on May 31st, 1911 bound for the French port of Le Havre with a stop Havana. The event was reported in the June 1st edition of the New York Times:

VERA CRUZ, May 31. -- Ex-President Porfirio Diaz sailed from this port tonight on the steamer Ypiranga, bound for Havre. The steamer goes by way of Havana, and Gen. Diaz's ultimate destination is Spain. The ship was only a little way out when the searchlight of the fortress guarding the port was turned on it. With glasses in hand, among a small party in the stern, Diaz was standing, somewhat apart, close to the rail. He was plainly discernable, taking his farewell look at his native land.

It arrived in Havana with the general on board 2 days later, again as reported by the New York Times on June 4th:

HAVANA, June 3. -- The steamship Ypiranga, which sailed from Vera Cruz June 1, bearing into exile Gen. Porfirio Diaz, passed into this harbor at 6:30 o'clock, anchoring off the Custom House. The Ypiranga was quickly surrounded by a great fleet of tugs, launches, and harbor boats, bearing a throng of prominent Cubans and representatives of the foreign missions desirous of paying their respects to the distinguished visitor.

He eventually arrived in Le Harve on June 20th, after brief layovers in Santander and La Coruña in Spain and Plymouth, England. The picture below purports to be of the Ypiranga entering the Le Harve harbor with Díaz aboard. 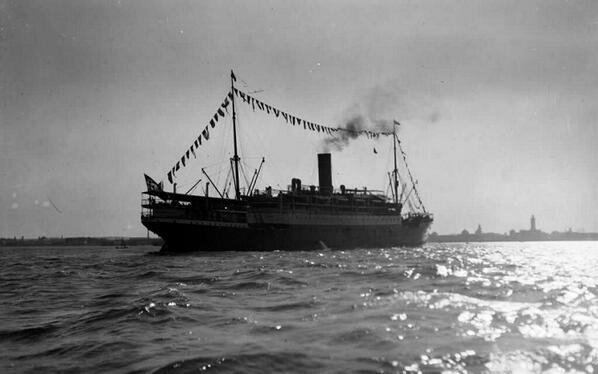 This would actually turn out to be only one of the ties that the ship would have with the Mexican revolution. In April of 1914, it was involved in what would become known as "the Ypiranga incident" when it was detained while trying to dock in Veracruz to unload a shipment of arms for the Huertistas.

Not the answer you're looking for? Browse other questions tagged revolution mexico or ask your own question.

2
From which Russian-American Company ship did Osip Volkov defect to Mexico?
14
How long did it take mail to get between Madrid and Mexico?
47
Why did Germany officially acknowledge the contents of the Zimmerman telegram?
14
Who decided on the name “Mexico”?
1
Did the Mexican province of Nuevo Mexico have its own provincial flag?