Why did Charlemagne retreat after the Battle of Pamplona?

After Charlemagne defeated the Christian Basques in Pamplona, why did he retreat through Roncevaux Pass (thereby setting himself up for ambush) instead of going on to conquer more of Iberia?

"After the negotiation at Zaragoza, Charlemagne heard news of a Saxon revolt in the North, which forced him to retreat back to his kingdom. But before leaving Spain he decided to further secure his hold on the Vascone territory. Charlemagne first eliminated any possible opposition from the natives of the region (including the Basque tribes), believing that many of them were allied with the Moors. He gave orders to tear down the walls of the Basque capital Pamplona, possibly fearing that it could be used for future conflicts. Some primary sources suggest that he destroyed the city altogether, and many towns in the region were also razed. Garrisons and military outposts were placed throughout the territory, and there were accounts of the Franks' harsh treatment of the Basques during their occupation. After securing the region, Charlemagne marched for the Pyrenees mountain pass in hopes of returning to France." Wikipedia

My reason for questioning this is that the Saxon Wars had been going on for seven years before Charlemagne's invasion of Iberia. Logically, why didn't he simply go on and capture some more of Spain, instead of leaving and fighting the Saxons? Did he expect to gain more territory by battling the Saxons than by battling the Basques and Moors, or what?

The short answer is that Charlemagne didn’t have much choice. Roger Collins, in ‘Early Medieval Europe 300 – 1000' asserts that

The expedition that Charles led into the Ebro valley in 778 was ill-conceived and unnecessary, and the nearest any of his undertakings came to disaster

The disastrous campaign came about when the wali of Barcelona led a revolt against the caliph and, needing a powerful ally, asked Charlemagne for help. Charlemagne divided his army in two, with one crossing the Pyrenees in the east in the direction of Barcelona while the other crossed in the west into the Ebro valley and towards Pamplona (this was the army Charlemagne led).

From the outset, Charlemagne made a number of mistakes, one of which was to underestimate the opposition he would face. As Alessandro Barbero states in ‘Carlo Magno’

(This translates roughly as: The hope of an easy conquest was without doubt the main driving force of the expedition;)

However, as Collins points out,

The sons of the prophet were, militarily, a very different proposition from the unsophisticated pagan levies of Saxony. They occupied strong, defensible cities, which the Franks were ill equipped to besiege. (my highlighting)

Charlemagne took Pamplona easily enough as its defences were poor but the Basques were no less hostile to the Franks than they were to the Muslims. His destruction of the city’s defences further angered the Basques.

Adding to Charlemagne’s problems was the collapse of the Muslim alliance against the caliph. As a result of this, the eastern army was denied permission to enter Barcelona and was unable to take Zaragoza. The eastern army had nowhere to go but home.

With Charlemagne’s Muslim allies in disarray, the caliph’s forces were now fast approaching Pamplona from the south, leaving Charlemagne no option but to retreat back across the Pyrenees where

Charles had made enemies of the people who controlled the Pyrenean passes through which he would have to travel on his return. 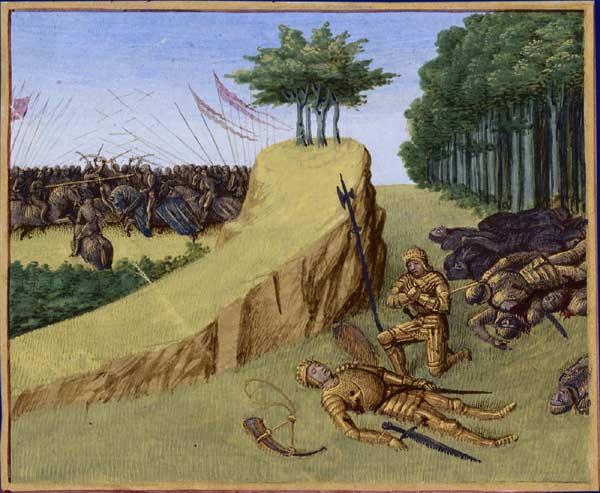 Considering how badly the whole campaign had gone, Charlemagne really had little option but to retreat. Faced by a powerful enemy in a hostile country, and with his allies having defected or been defeated, there was no longer the prospect of an easy conquest, or perhaps even any kind of conquest at all. Retreat was the only realistic option, even if the Saxons hadn’t been in revolt.

Not the answer you're looking for? Browse other questions tagged spain contemporary-history or ask your own question.

5
Why do people (governments) hang on to the idea of East and West?
7
What is the source and history of “green on blue attack” expression?
12
Why did England and Portugal cheap out on the Battle of Aljubarrota?
54
Why was Spanish Fascist dictatorship left in power after World War II?
3
Why didn't the knights of Western Europe drive the Moors out of Granada in 1212 when they invaded Iberia?
4
When did the Running of the Bulls begin?
1
Why does the word “al-Ahmar” appear in the name of ibn al-Ahmar?
2
Were the Spanish aware that American mainland existed after discovering the Caribbean?