Did alcohol consumption increase in the U.S. after 1933?

Did people in the United States drink more alcohol after it became legal in 1933? Or was it the same? And how was it before it become illegal to drink in 1920?

Consumption appeared to rise enormously after Prohibition was ended. After looking at several graphs, this one seems to agree with most: 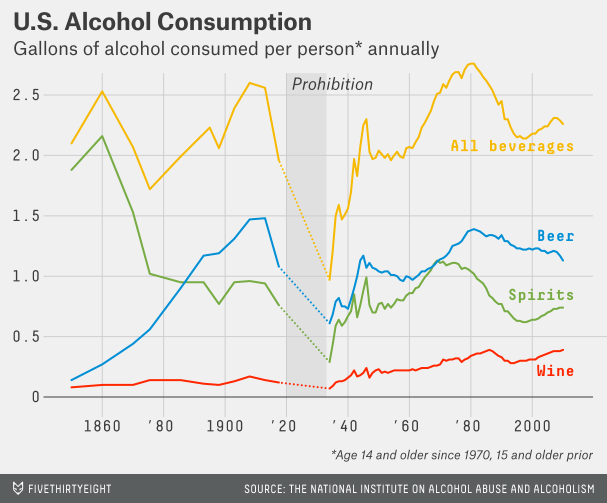 As always, pick sources with care.

Alcohol consumption increased after 1933 for at least two reasons, as shown in a graph put up by another poster.

There was a lot of "pent up demand" on the part of people who wanted to drink during the 1920s but was afraid to, because of the law.

Women had "learned" to drink in large numbers during the 1920s. That's because women accompanied men (initially as chaperones, later as customers in their own right) to "speakeasies" that technically were not drinking establishments, because they were unlicensed before Prohibition. This was particularly true for wine, less so for other forms of liquor.

Not the answer you're looking for? Browse other questions tagged united-states alcohol prohibition or ask your own question.

45
Why did Greeks and Romans dilute their wine?
16
Did the U.S Constitution revoke or merely amend the the Articles of Confederation?
10
During the U.S. Prohibition, how did they get away with drinking alcohol?
10
When did “whites only” signs (racial segregation) become illegal in the USA?
9
Are there examples of battles fought under the influence (of alcohol)?
2
Did 9/11 change people's behavior during the playing of the national anthem?
50
How did the authorities not find the speakeasy clubs during the prohibition?