Cost of peacock throne vs Cost of Taj Mahal

I am listening to the lectures: Professor Michael H. Fisher, phd - History of India and I stumbled upon a very surprising sentence:

The peacock throne cost twice as much as Taj Mahal.

Amazed, I tried to dig a bit and I found a very similar sentence:

The throne was even for the Golden Age Mughal standards supremely extravagant and cost twice as much as the construction of the Taj Mahal.

In this wikipedia article.

My question: is there any incontestable source which could confirm it?

If not, I would like at least to read some research on the topic of "cost of peacock throne". The wikipedia articles point to websites like this one here, but it's not a scientific research.

Well! Like you I also wasn't able to find a exact comparison between the cost of Peacock Throne and Taj Mahal. But I have found some interesting points which I would like to share as you asked, According to K. R. N. Swamy,

Wrought out of 1150 kg of gold and 230 kg of precious stones, conservatively in 1999 the throne would be valued at $804 million or nearly Rs 4.5 billion. In fact when made, it cost twice as much as the Tajmahal crafted for the same Emperor Shah Jahan.

Further he explains that about the jewels which were attached to the Peacock throne,

On the top of each pillar there were to be two peacocks, thick-set with gems and between each two peacocks a tree set with rubies and diamonds, emeralds and pearls. The ascent was to consist of three steps set with jewels of fine water". Of the 11 jewelled recesses formed around it for cushions, the middle one was intended for the seat it for Emperor. Among the historical diamonds decorating it were the famous Kohinoor (186 carats), the Akbar Shah (95 carats), the Shah (88.77 carats), the Jehangir (83 carats) and the second largest spinel ruby in the world — the Timur ruby (283 carats). A-20 couplet poem by the Mughal poet-laureate Qudsi, praising the Emperor in emerald letters was embedded in the throne. 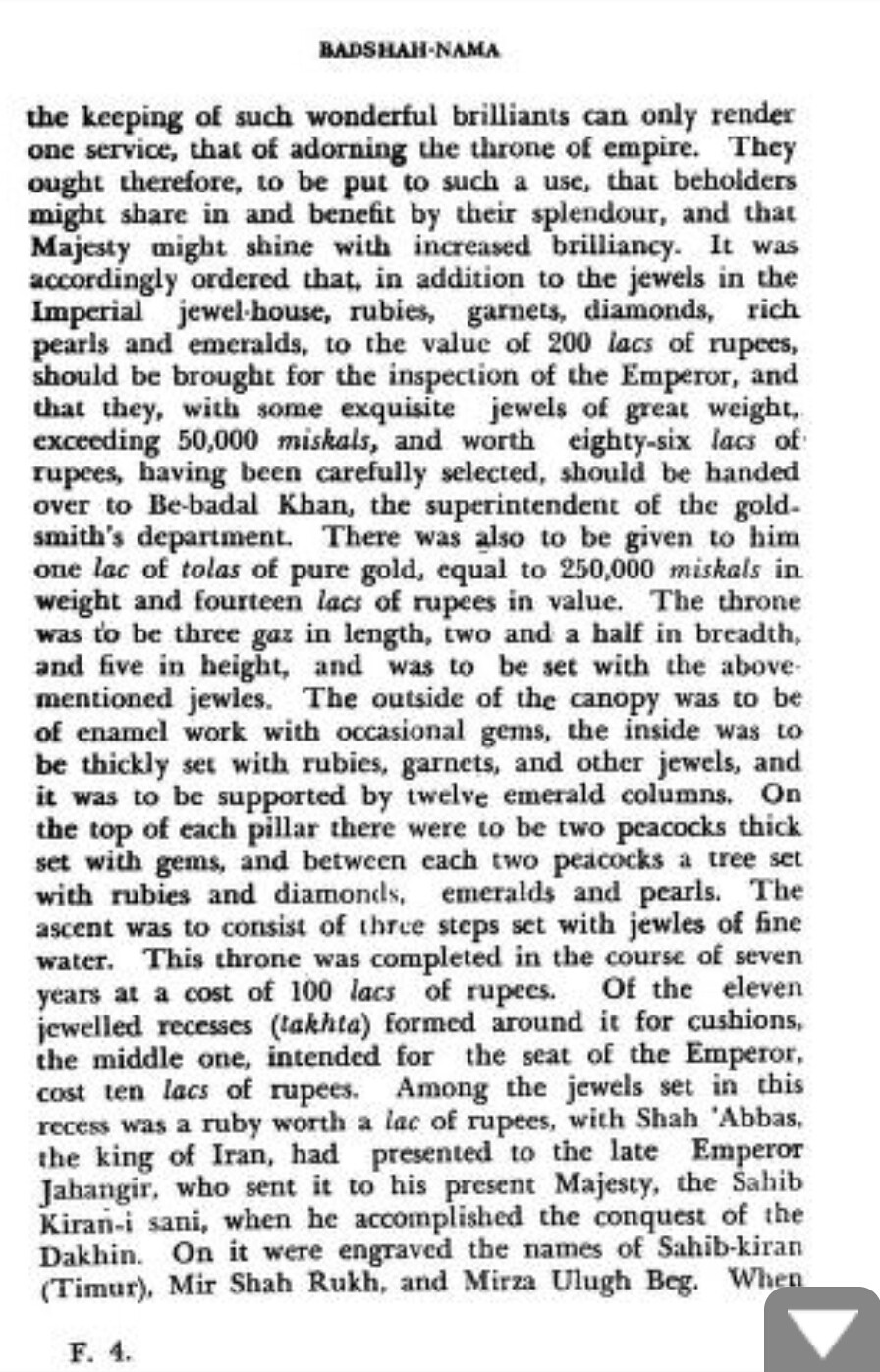 There is another source about the cost of the Peacock throne according to Abdul Hamid Lahori,

This throne was completed in the course of seven years at a cost of 100 lakhs of rupees. Of the eleven jeweled recesses (takhta) formed around it for cushions, the middle one, intended for the seat of the Emperor.

The Taj Mahal complex is believed to have been completed in its entirety in 1653 at a cost estimated at the time to be around 32 million rupees, which in 2015 would be approximately 52.8 billion rupees (US$827 million).

Hopefully this information can be helpful for you.

Not the answer you're looking for? Browse other questions tagged economy india art or ask your own question.

5
How much did helping the American Revolution cost France?
11
Token status of the Mughal throne
5
Was having one breadwinner in the family feasible in the early 1900s because of greater pay, lower cost of living, or both compared to today?
8
How much did a telephone call cost in the USA around 1920?
3
What was the original cost of a Sharps Rifle?
6
What was the effect of the Civil War on the cost of cotton?
27
How much did a transatlantic telegram cost in 1914?