How was South African infrastructure before 1994?

So we all know that 1994 was a good year for the social side of South African life. Apartheid was over, the government was now elected by the majority of the people and Nelson Mandela was in charge with the help of the ANC.

However, the other day I was watching a vlog from a South-African YouTuber who briefly mentioned that since the ANC took power, the infrastructure started to get worse. According to him, pot-holes started forming in the streets, education started to lose its quality as did the police force... And it was only after 1994 that corruption became a major issue.

Now I have been trying to research these statistics but there is next to no data on the internet, other than the GDP growth from 1994-onward which appears okay, but still below the world average.

What was the infrastructure like in SA before 1994? was it good? Mediocre? Better or worse?

Today, it's obvious that South Africa is not very-well run by the government, i.e. the crime rates are sky-high especially with violent crime and the police force is inadequate to deal with the situation so most people turn to private security instead. I'm curious to know if the situation was better in the past, was South Africa once considered a developed nation?

Needless to say, it would be nice to get a statement from someone who lived in SA through the 70s or 80s. Thank you.

My father worked in Lesotho from 1975 until the mid 1980s. I attended a boarding school in Bloemfontein in the Orange Free State from 1975 - 1977 (after which I transferred back to a boarding school in the UK. I returned to Lesotho for the holidays, and between 1975 and 1979 I visited all of the provinces of South Africa. So here are my observations, for what they are worth.

My experience was that the state of the infrastructure was comparable to that in the UK at that time (in some ways it was better, given the strikes that impacted services in the UK in the mid 1970s). Metalled roads were kept in good repair, and even dirt-roads were maintained to a standard that allowed a normal family saloon to use them without risk (with the possible exception of the rainy season in some parts of the country!).

As far as I could see, education was also excellent - provided, of course that you were white. Education for other groups was less great, as you can probably imagine. However, I played rugby against school teams from other parts of the country and the facilities at all the schools (for white kids) we visited seemed to be uniformly very good.

Crime rates were certainly low while I was there. Car-jackings were almost unheard of, and serious crimes like rape and murder were rare. But then again, I'm white, and I lived in areas where most residents were also white.

I rarely had much contact with the police, but again, I'm white (and I have a British passport - which really helped on a few occasions), so my experience was mostly positive. The police that enforced the Pass Laws (the laws that enforced segregation under Apartheid) certainly weren't the brightest people I've ever met, but I also never personally witnessed any instance of abuse or corruption.

I returned to the UK permanently in 1979, so I have only anecdotal evidence of what happened since, but friends do say that things have got a lot worse, so it's possible that your vlogger is right.

But perhaps black South Africans would have a different perspective ...

The overall decline of South African infrastructure is an ongoing trend that predates the rise of the ANC.

A number of articles in the economic literature look at the data on this. Here is one that concludes:

Public sector investment in South Africa’s economic infrastructure rose as a percentage of GDP between 1960 and 1976, but this was followed by a long-term decline.

Investments in railways, roads, ports and electricity all plateaued at some point earlier on in the twentieth century. Telecommunications, however, is an exception and has actually improved under the ANC.

In contrast to other measures of infrastructure goods and services, fixed telephone lines grew rapidly in the 1980s and 1990s [...] and there was explosive growth in mobile phones in the 1990s and early 21st century.

Another article mentions some extension of electrical lines (but not generative capacity) as a partial exception to the overall decline. It also includes the following graph which shows the overall relative decline in infrastructural investment very clearly. The dotted black line essentially shows that the value of South African infrastructure peaked in the 1980s. The dark and solid line is also relevant, showing that investment peaked earlier on. 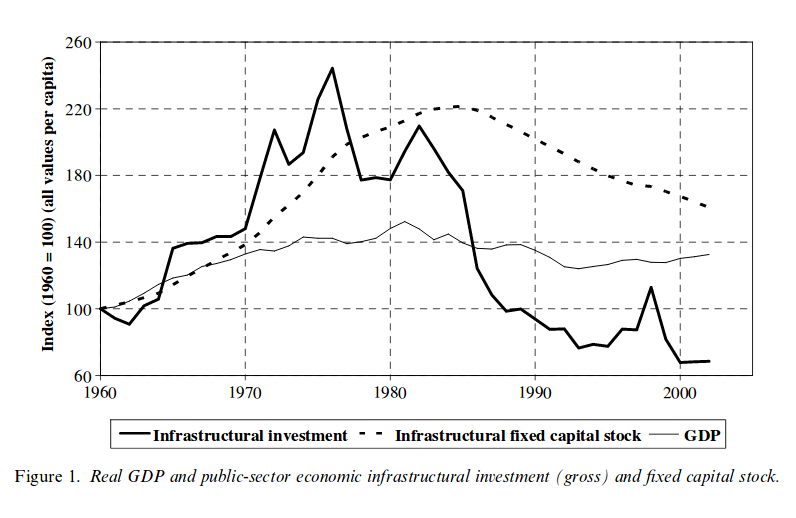 Not the answer you're looking for? Browse other questions tagged 20th-century south-africa or ask your own question.

28
How did the US/South Vietnam lose the Vietnam war?
16
How popular was Mozart in France before WWII and after it?
3
Were there any non-Afrikaner apartheid supporters in South Africa before 1994?
4
How did the white minority in South Africa see their situation in the apartheid times?
4
Who was the train conductor who threw Gandhi from a first class train coach in South Africa?
13
How were interracial relationships between African-Americans and Latinos treated in Southern states before the Loving decision?