When was the 50 billionth human born? [closed]

I don't know if this question belongs precisely at History.SE, but I can't think of a more fitting alternative.

I've heard the estimate several times that about 100 billion humans have existed throughout human history. (I guess this depends somewhat arbitrarily on when you start counting our ancestors as human, but let's say we've settled on a fixed beginning moment and work with that for the rest of this question.)

When had half of all humans who have ever existed (until today) been born already? If the 100 billion number is correct, then I'm asking when the 50 billionth person was born.

Note that whatever the answer is, we can say that most of the humans who have ever existed were born after that date (or since slightly before that date).

Data published by the demographer Carl Haub and Dr. Toshiko Kaneda in How Many People Have Ever Lived on Earth? on the Population Reference Bureau (PRB) website suggests that the 50 billionth person would have been born around 130 AD / CE. This can be seen by looking at the column 'Number Ever Born' in the table below: 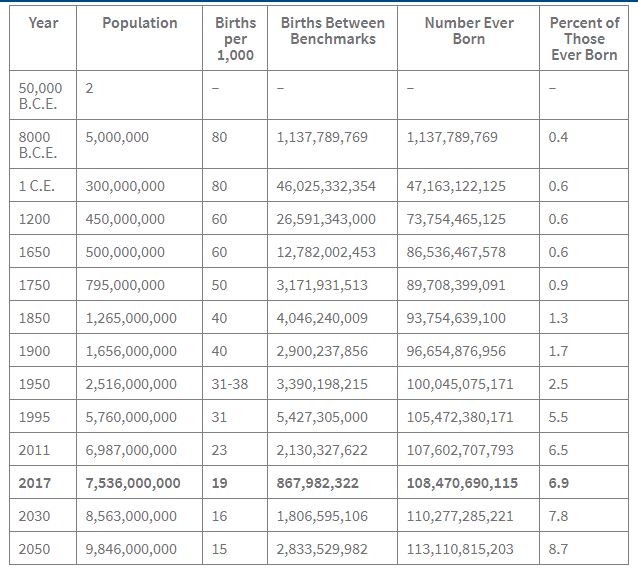 (His data estimates showed that "those alive in 2002 constituted only about 6 percent", far from the 'myth' of more than half.)

He and Toshiko Kaneda updated the data in 2002 and 2011, conceding that their approach is (of necessity) "semi-scientific". On the methods used in their calculations, the authors say that

calculating the number of people who have ever lived is part science and part art. No demographic data exist for 99 percent of the span of human existence. Still, with some assumptions about prehistoric populations, we can get a rough idea of this historic number...

Fixing a time when the human race actually came into existence is not straightforward. Hominids walked the Earth as early as several million years ago, and various ancestors of Homo sapiens appeared at least as early as 700,000 B.C. According to the United Nations Determinants and Consequences of Population Trends, modern Homo sapiens may have appeared about 50,000 B.C.

This corresponds "to the start of the Upper Paleolithic" and "the emergence of full behavioral modernity" ("behavioral and cognitive traits that distinguishes current Homo sapiens from other anatomically modern humans, hominins, and primates.").

The articles How Many People Have Ever Lived on Earth? and Do Living People Outnumber the Dead? go into details on how the estimates were arrived at (the details are a bit lengthy to include here...).

The margin of error for the birth of the 50 billionth person who ever lived is fairly large; Hadrian may not have been born or Galen may have been dead and buried rather than an infant, but the Kushan empire and the Han dynasty cover considerably longer time periods.

Not the answer you're looking for? Browse other questions tagged prehistory anthropology world population or ask your own question.

5
What was the last landmass on Earth to be settled by human beings?
21
Before the Land Bridge Theory, how was human presence in the Americas explained?
2
Why is there a gap of information in Russia for human migration?
1
Historical Human Fecundity info?
5
When was the deadliest year in human history in absolute terms?