How does this bird trap work?

www.nuernberger-hausbuecher.de provides the illustration below: 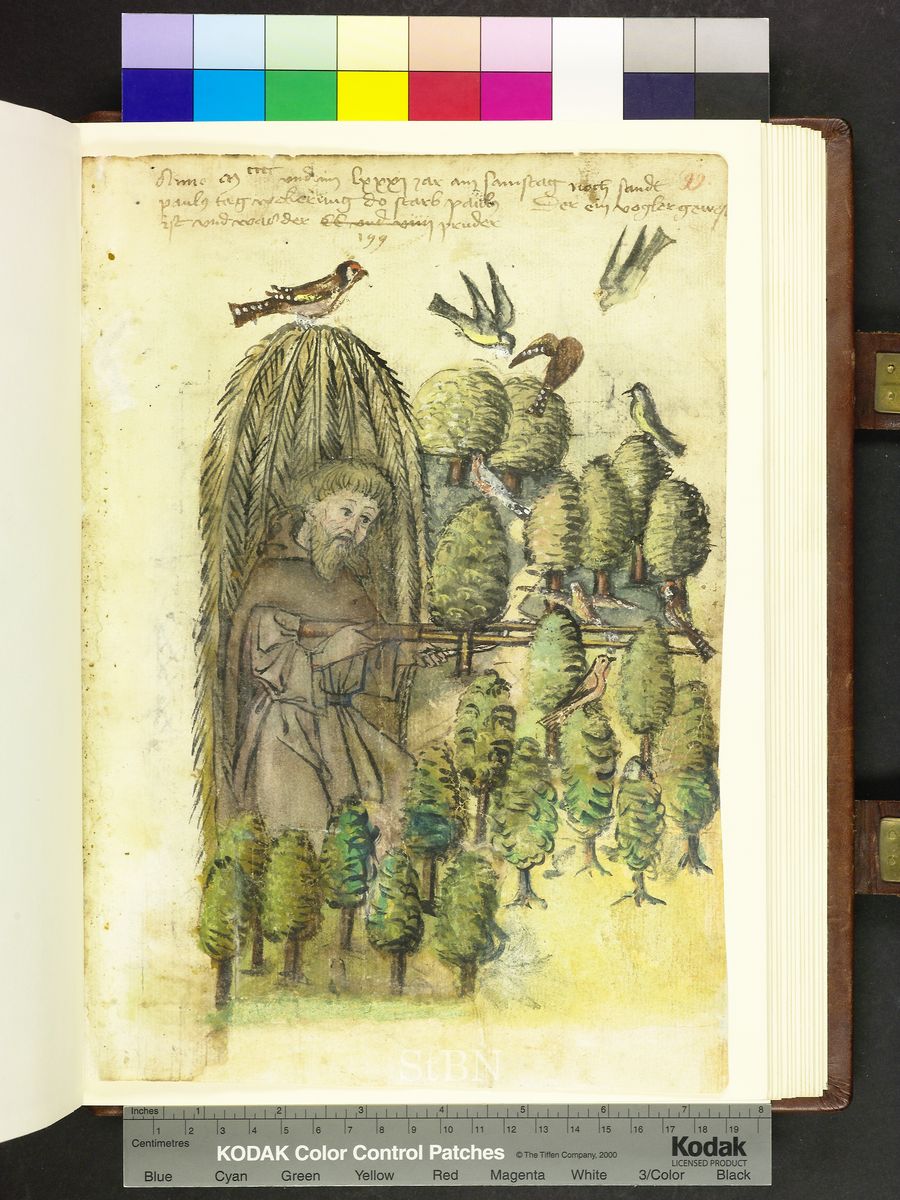 I want to know how this bird trap mechanism works, as shown by this bird hunter of the medieval period on the book image, and it doesn't seems to have any bait in it either.

As a non-European native (nor do I live there), I have no idea at all how this works or if this trap is still being used today.

Feel free to edit my grammar and tag to be appropriate since I don't know what tag is appropriate for this.

It seems that this is a depiction of a variant of the profession fowler, or bird-catcher, a type of food production industry.

A bird catcher is waiting in a hiding place and tries to catch birds with the device sticking out of his shelter. This is a long clamping trap. It can be pulled together with a rope, which he can be seen holding in his left hand.

Bait seems unnecessary or optional, as the trap seems to rely mainly on the emulation of a twig, an otherwise "safe" and favourite resting place for most birds. However, if one of the birds makes the mistake of landing on a "twig", the other "twig" moves through pulling on the rope to close the trap and lock their feet in.

This page in particular is described at the source Amb. 317.2° Folio 99 recto (Mendel I)

The contemporary term for it in German medieval hunting terminology would be Kloben, described in more detail here: 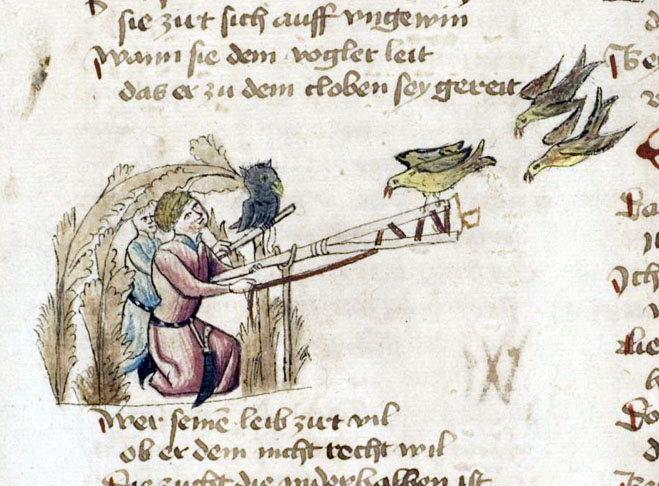 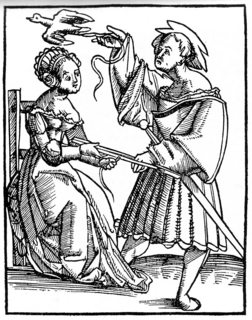 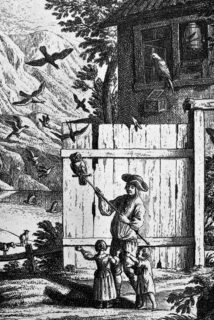 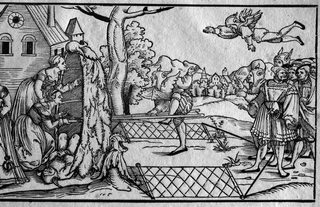 The bird catcher stands in an arbour camouflaged with fronds and tries to catch birds with the catching device, a long clamp trap that can be pulled together with a rope he holds in his left hand. Nine birds, including tits and finches, buzz above the trees.

A Kloben is a wooden instrument used to catch all kinds of small birds, but especially tits. It consists of two long sticks, dug out lengthwise so that the height of one fits exactly into the depth of the other. Both sticks are carved a little at the bottom and then pushed into a round piece of wood prepared for this purpose by a carpenter or wood turner, whereby both parts lock together. The two parts of the block are then fitted with strong cords, with which they are pulled so tightly that they can hold even a hair. If a titmouse or another small bird comes onto such a stretched-out log, the birdcatcher pulls it closed, catches the bird by the claws and pulls it into the hut.

As for the practice now, I hesitate to describe that for Europe as a whole, as this 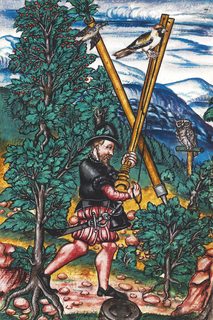 method seems to have been popular throughout, but lost attractiveness or importance at the end of the 19th century. Today it would be a forbidden method to hunt, albeit still practised in Italy, or the Balkans, or even further east, and illegal if done on EU territory.

Especially in Switzerland, the Kloben acquired symbolic meaning, for 'catching birds' as meaning 'get a girl' or 'catch a sinner' (in Catholic lands apparently closely thought together anyway ;): 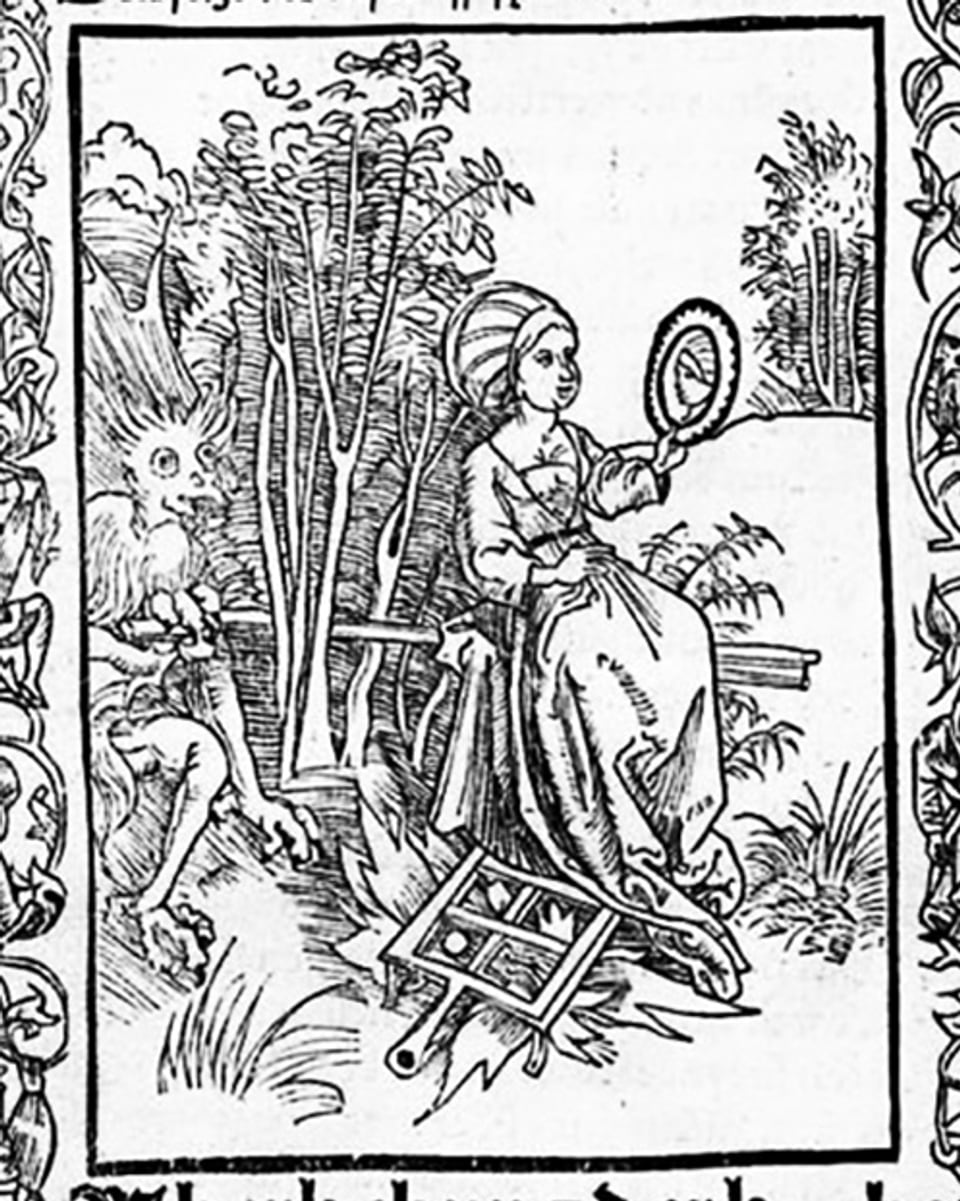 It appears that this method wasn't very popular in English speaking countries at all, as a dictionary fails to provide a direct translation for Kloben with a equally specialised term and opts for the literal and cognate way to describe it as "cloven stick". (— David Dalby: "Lexicon Of The Mediaeval German Hunt. A Lexicon of Middle High German terms (1050—1500), associated with the Chase, Hunting with Bows, Falconry, Trapping and Fowling", de Gruyter: Berlin, 1965. p119.)

20
How common was marriage between nobles and peasants in the Middle Ages?
17
How did people say “I have to go to the bathroom” before the bathroom and pipes were common?
26
How did William the Conqueror consolidate his military victory?
7
Does anyone know anything about medieval instant pottage?
1
How were "Wehrbauern" (soldier peasants) in medieval Europe even a thing, at all?
3
How did medieval camp followers work?