Did anyone in Europe predict the existence of the Americas?

According to the answer of this question, Columbus was pretty much unique in his belief that the world was small enough and Asia was big enough to make sailing west to Asia possible. Everyone else expected (correctly) that it was WAY too far away to be a practical option.

Of course, it ended up being moot, because there was a completely new landmass in between Europe and Asia: the Americas. Columbus landed there instead, and the rest was history.

But if the Europeans had anything even approaching an accurate idea of how far away Asia was to the west, they must have realized that that would be a COLOSSAL ocean. (About 11,000 miles, we can now estimate.) Did anyone propose the idea that there was more than water out there? That an ocean that big might hold a whole new continent, or even more than one, before you got back around to "India"?

Especially given the Viking discoveries of America (and of Iceland and Greenland), were there rumors or discussions of other lands to the West? Or did the European powers just assume it was empty ocean all the way to Asia, right up until they discovered an enormous landmass blocking their way?

As fate would have it, the first known globe of the Earth was created in 1492, the same year as Columbus' voyage. As such, it is also the only known globe to depict the area between Western Europe and East Asia prior to the discovery of the New World. None of the earlier flat maps I could find made any kind of legitimate effort at depicting this area. 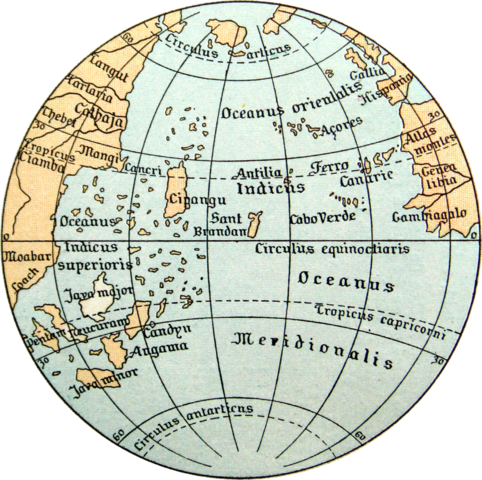 The author was working for the King of Portugal at the time. Given this as the state of the art of European cartographical knowledge in 1492, we can see that the intervening ocean was thought to contain numerous small islands. The Azores and Canaries and Cape Verde islands were known and depicted. In the East, Japan (Cipangu), Java and other "spice" islands of the SE Asian archipelago are depicted.

There are some interesting "unknown" islands. There are several placed up in the arctic circle, perhaps as a nod to Iceland and its legends. There was also one island roughly the size of England smack dab in the middle of the ocean named "Saint Brandan". Likely this is a reference to the story of the Irish monk St. Brendon, who was said to have traversed the ocean and found an island paradise. The interesting thing about this is that it appears that this rather tall tale was apparently given much more credence in mainstream European thought than the Icelandic discoveries.

Even there though, it was clearly just thought to be a large island, not an entire new continent. So it seems fair to say the folks in the best position to speculate, the Portugese navigational community, didn't think there was anything in the middle but islands.

Europeans, perhaps not, someone in the old world, yes.

Al-Biruni (973–1050) lived in Khwarezm (modern Uzbekistan). Among other works in mathematics, astronomy, physics, mineralogy, history and geography, he calculated the circumference of Earth with a precision higher than his predecessors, and made some precise maps of known lands. In his work Codex Masudicus he conjectured that there should be an inhabited continent between Europe and Asia:

But was three fifths of the Earth’s circumference really nothing but water? Biruni considered this possibility but rejected it on the grounds of both observation and logic. From his study of specific gravity he knew that most solid minerals were heavier than water. Would so watery a world not give rise to serious imbalances to which the planet would have had to adjust over time? And why, he asked, would the forces that had given rise to land on two fifths of the earth’s belt not also have had an effect on the other three fifths as well? Biruni concluded that somewhere in the vast expanses of ocean between Europe and Asia there must be one or more unknown land masses or continents.

His reasoning was unsound from the modern point of view, since the same arguments would imply, for example, that Pangea could not exists. But the conclusion was correct.

There is no evidence that this work was known to Columbus, but, interestingly enough, he did know a work of central Asian geographer Ahmad al-Farghani (c. 800–c. 870) who computed the circumference of Earth more accurately than the Greeks (but less accurately than al-Biruni). There is a theory that it is a confusion about the units used by al-Farghani that led Columbus to underestimating the circumference of the Earth, underlying the whole rationale for his trip.

This is far from proven science, maybe not even at the level of a hypothesis. Supposedly the king of Mali in Africa sailed to the Americas around 1300 or earlier. Don't remember the exact years. Some people have also suggested that some of the statues found in central and south america look African and this could indicate a voyage from the old world that we don't know about.

I also like to read Graham Hancock once in a while and in one of his books he said that supposedly Columbus spent a long time on some island that had a tradition of sailing and navigation going back thousands of years and they had secret maps that depicted the Americas.

There is some evidence to this, but not proven. I've seen the statues on TV and they do look African. Also some of the artwork from ancient mesoamerica seems to be based on the same constellations as that from the Middle East and Asia. Some of this will take time. I don't follow Hancock religiously, but some of the things he talked about in his 1993 book are coming to light.

Fingerprints of the Gods was written before Gobelki Tepi had been studied in detail.

Magicians of the Gods No, I don't believe there were 7 magical people who fled Atlantis or whatever and sailed the world. What I do think after reading this is that there is something beyond mere coincidence to explain why artwork is based on the same constellations around the world. And that people may have studied the stars and mathematics earlier than we currently know.

None of this stuff is close to being any kind of proof, but you have to wonder sometimes. Sailing then wasn't like it is today. It was extremely dangerous and doing so into the unknown even more so. It was also insanely expensive and why would a new king give Columbus so much money on such a risky venture?

When I was in school we were taught Columbus discovered America. Today we know it's not entirely true. In 50 years we might find enough evidence that people have sailed across the oceans for thousands of years.

Not the answer you're looking for? Browse other questions tagged geography age-of-discovery exploration americas christopher-columbus or ask your own question.

20
How did Columbus calculate the size of the Earth?
13
How powerful was the Malian empire?
3
Why was Columbus not aware of the existence of America?

12
Why aren't the Americas named after Christopher Columbus
6
How did Diego Gutiérrez know the boundaries (shape of the Americas) when he drew the 1562 Map of America
7
Did Portuguese fisherman visit New England prior to 1492?
60
Why did Columbus cross the mid-Atlantic instead of exploring from Greenland?
20
To what extent were Polynesians in contact with one-another before European contact?
2
When did the spherical shape of the Earth become common knowledge?
12
Which 'evidence' is there for a claim that 'Chinese discovered America in 636'?
4
Did the Norse visiting the Americas cause any high-mortality epidemics?
26
Why was the northern boundary of the Mongol empire set where it was?