Who were the target audiences of this propaganda lithograph?

What was the main purpose of the image below, who was the audience (except Japanese people themselves)?

It is a Japanese lithograph depicting the capture of Blagoveshchensk, Siberia, by the Imperial Japanese Army during the Siberian Intervention, part of a larger effort by the western powers and Japan to support White Russian forces against the Bolshevik Red Army during the Russian Civil War. The Allied invasion took place in August 1918, and Japanese troops remained in Russia until October 1922. (source: Wikipedia, Creative Commons Attribution-ShareAlike License) 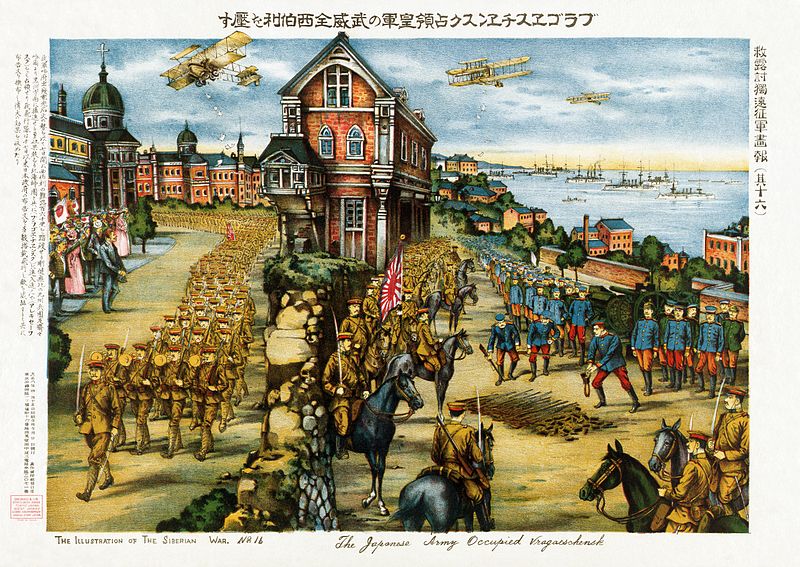 What intrigues me particularly are the parts in English.
The strange wording and irregular spacing confirm they have been written by a Japanese author.

If the local population was also part of the audience, why not write in Russian?
If not, who was the target audience of the English-language part?

This blog states that the company that produced this image was a Japanese company whose purpose in making the lithographs was to celebrate the Japanese victory. The blog also linked to multiple other related images.

The images are held at the Library of Congress so it is reasonable to assume that they were consumed in the United States.

The Wikipedia page on the "Siberian Intervention" lists the United States, Britain, and Canada as contributors of troops to the intervention. Since those countries (along with France and Italy) were allied with Japan in the effort in Siberia it is reasonable to conclude that the English language targets for the lithographs were populations in the United States, Britain, and Canada.

Not the answer you're looking for? Browse other questions tagged russia japan or ask your own question.

13
Who are the modern descendants of the Khazar people?
6
Who were the first two democratically elected leaders of Russia?
1
Who were the Bishops of Irkutsk after St. Innocent?
24
What made the Russian Navy suspect Japanese torpedo boats were in North Sea in 1904?
23
Why did the Japanese withdraw from Siberia in 1922?
2
Is this story about the Tsar's encounter with a sergeant true?
1
What is the story of this kamon?