Why was Tegh Bahadur executed by the Mughal Emperor Aurangzeb?

This Wikipedia article indicates that he was executed because the ruler wanted to strengthen his grip on power:

According to the official account of the Mughal Empire, written 107 years later by Ghulam Husain of Lucknow in 1782,

Tegh Bahadur, the eighth successor of (Guru) Nanak became a man of authority with a large number of followers. (In fact) several thousand persons used to accompany him as he moved from place to place. His contemporary Hafiz Adam, a faqir belonging to the group of Shaikh Ahmad Sirhindi's followers, had also come to have a large number of murids and followers. Both these men (Guru Tegh Bahadur and Hafiz Adam) used to move about in the Punjab, adopting a habit of coercion and extortion. Tegh Bahadur used to collect money from Hindus and Hafiz Adam from Muslims. The royal waqia navis (news reporter and intelligence agent) wrote to the Emperor Alamgir [Aurangzeb] of their manner of activity, added that if their authority increased they could become even refractory. — Ghulam Husain, Mughal Empire records

Tegh Bahadur, according to Mughal Empire records, was collecting money from Hindus (which is kind of treasonous at that time).

This book states he was killed because he didn't convert to Islam. 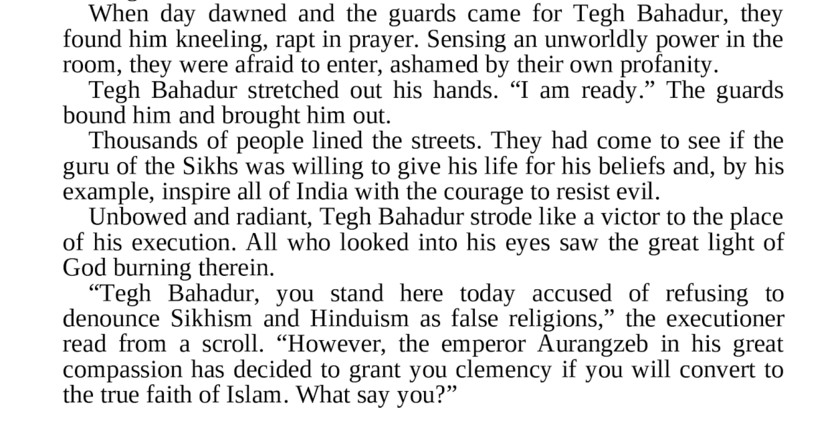 Why was he killed?

Ghulam Hussain was very much biased towards his own religion and sect (I forget if he was Shia or Sunni) You can find this reference made by company official who translated his book Siar-al-mukhatarin to English. As per all existing historical records Aurangzeb was a bigoted ruler and wanted to convert whole of India to Islam by force (others were successful using peace or by Sufi movement). His policies made many Rajput states from Rajasthan, Sikhs in Punjab and Maratha in Deccan rise in rebellion. So its fair to assume that he punished Teg Bahadur for rising against him and after capture asked him to convert.

It is to be noted that he presented similar choice to captured Maratha King Sambhaji down in Deccan (read : History of Marattha by John Duff)

11
Token status of the Mughal throne
7
Why did the offices of Shogun and Emperor never merge?
6
What were Aurangzeb Alamgir's motives for reversing much of the religious tolerance in the Mughal Empire?
11
How voluntary was Sati during the Mughal era?
8
Was Bhai Mati Das sawed in half on the orders of Aurangzeb?
4
Why was the Mughal Empire Persian oriented?
2
How were the ladies of the Mughal harem titled and styled?