Which regions/dynasties do the flags in this Fresco about Byzantine-Persian war represent?

Which regions or dynasties do the flags represent?

From what I can guess:

So which regions do these flags represent? Or did the artist just made them up in his head?

P.S. Pardon me if I am mistaking between red and green color here.

I can offer a little insight into one of the symbols. The bird in the banner on the left is a goose. 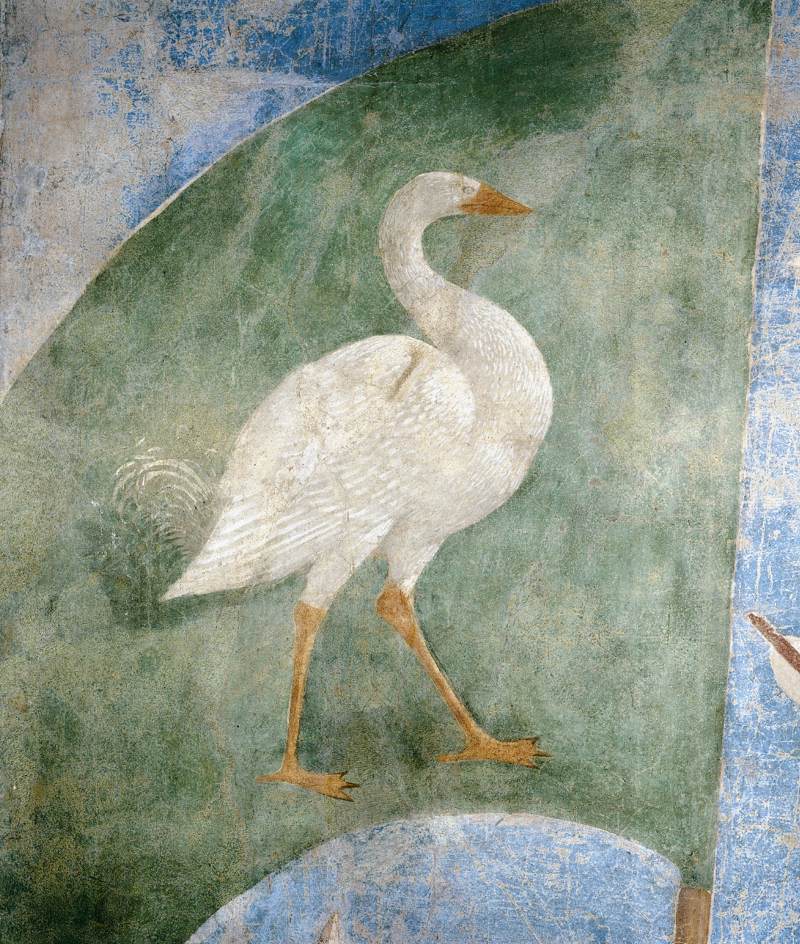 The goose was symbolic to the Romans, dating to a legend concerning geese from a temple of Juno warning the besieged Romans on Capitoline hill of an impending assault on their position during the Battle of Allia, 390 BC. It represents the quality of vigilence, and is mentioned at times as the "Saviour of the Roman Army".This is referenced by the author of books concerning the painter as the "Capitoline Goose":

The goose reappears in similar form as part of the flag of a particular Contrade of Siena, the Oca contrade.

Remember, this work was done as a fresco to record the History of the True Cross, and covers the walls of the Basilica of San Francesco in Arezzo Italy. It was never meant to be a historically accurate reenactment of a battle. It was painted around 1452 concerning the Battle of Neneveh, which took place in 627, so knowledge of the particular elements of the forces under Heraclius would have been limited at best. Other elements of the painting do not accurately represent the history of the battle, the faces of the people surrounding Khosrau II are actually the faces of the benefactors of the church, the Bacci family, and the representation of the beheading of Khosrau II is inaccurate in itself, according to the wiki article on the battle:

Khosrau had already fled to the mountains of Susiana to try to rally support for the defense of Ctesiphon...The Persian army rebelled and overthrew Khosrau II, raising his son Kavadh II, also known as Siroes, in his stead. Khosrau perished in a dungeon after suffering for five days on bare sustenance—he was shot to death slowly with arrows on the fifth day.

So don't try too hard to glean historical information from a painting done 825 years after-the-fact.

It is possible that the gold lion on red was the coat of arms of some contemporary Italian lord put in the painting for some reason.

A gold lion on red, or a red lion on gold, was used as the coat of arms of the Kingdom of Lesser Armenia. Heraclius did recruit Armenian allies and attacked Persia through (Greater) Armenia.

3) The black head on white was the coat of arms of Corsica, a region near Italy where an Italian dialect was spoken. But it was a Moor's head, used to represent all kinds of Africans, black people, Arabs, Turks, and Muslims. Thus it might also be used to represent non-Christian Persians. So maybe Piero della Francesca used it as Chosroes's flag. It would be interesting to know the various coats of arms of ancient Persia used in various paintings and illustrations.

3b) What about the blue and gold flag? What was its design and was it supposed to some kind of Persian flag?

Piero della Francesca was probably familiar with the coats-of-arms of several Italian cities and may have used a red flag with a white cross to symbolize a particular Italian city for some reason. Or maybe to symbolize Christendom — presumably the use of such a flag by the Emperor was to symbolize overlordship of Christendom.

5) To me the "white swan on black" looks like "a pelican in it's piety" a bizzare looking pelican wounding it's breast to feed its young on drops of its blood. The white bird on green looks to me like its legs are a bit too long to be a duck.

I hope my comments are of some use in understanding the problems of identifying the flags correctly.

Not the answer you're looking for? Browse other questions tagged art byzantine-empire early-medieval flags greece or ask your own question.

10
Greek Revolution: Where did the Greeks look for descendants of the Byzantine dynasties?
11
Which Muslim factions during the Crusade used the crescent in their flags or banners?
10
Can anyone explain why the Scottish flag on this map from 1504 has a red cross on a white background?
4
Why is this hat identified as the Byzantine Imperial kamelaukion?