Why did the Nazis guillotine criminals but mostly hang political enemies, and why were the White Rose group an exception?

Both the methods used and the range of crimes 'meriting' execution changed under the Nazis. Dark History says:

When Hitler came to total power, he decided that criminals and enemies of the state should be executed by either guillotining [or hanging from 1942] and he ordered the construction of 20 guillotines. 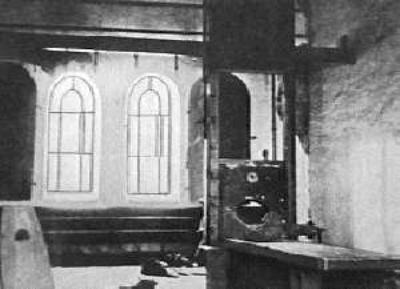 The guillotine in the Plotzensee Prison execution room. Source: https://ghb67.wordpress.com/2012/04/29/the-guillotine-in-nazi-germany/

Several other sites (here's one) mention the methods used for capital punishment in Nazi Germany. In summary, the three main methods of execution were generally:

...grave arson,[14] aiding and abetting treason, betraying a secret (mandatorily), procuring a secret for the sake of betraying it, insidious publishing or rhetoric, failure to denounce a capital crime, destroying means for military use, sabotage(mandatorily for soldiers), kidnapping (mandatorily).... a "dangerous habitual criminal" or one convicted of rape...

What I can’t find out is why the guillotine was used for criminals and (usually) hanging or shooting for political enemies. The guillotine seems more merciful than hanging, so it seems the Nazis regarded political enemies as worse than murderers, rapists, e.t.c. – but this is just a guess based on little evidence.

An exception was made for the six members of the White Rose anti-Nazi resistance organization, who were beheaded in 1943.

Why was this exception made for the White Rose movement?

During the Middle Ages, using an axe was a "good" beheading (for its time). That's because it required a skilled executioner to chop off the head with one blow. Anne Boleyn was executed by swordsman for this reason, and the execution of Mary Queen of Scots, which required two strokes. was considered a "botched" execution. But queens were given the highest consideration for their time.

Contemporaneously, hanging was a "bad" form of execution conducted under what I call the "choke" method. This required (typically) 10-20 minutes of agony. And it takes less skill for a hangman to tie a rope around someone's neck and suspend them from a cross bar than an axeman to chop off someone's head with one blow. More on this at the very end. People who don't want the gory details should note the tl;dr.

The Nazis at Nuremburg were executed under the "long drop" method, a "good" form of hanging that would knock out the victim immediately and cause death a few minutes later. That is, a victim would be dropped several feet, depending on his size, so that his neck would be broken. (Japan's General Tojo, a small man, required a drop of 7 feet 7 inches; things could be calculated that precisely.) Executioners who could calculate such (optimal) drops were highly skilled. This was probably more humane than the "good" beheading discussed above.

But the Nazis practiced both "bad" beheading and "bad" hanging.

The use of the guillotine by the Nazis was a "bad" beheading, even though it was "faster" than the axe beheading. That's because it originated with, and was associated with the French Revolution, to the point where even Hitler was somewhat wary of using it. It required less skill on the part of executioner, basically to lift and drop the knife in the slot, and to stuff the victim into the machine, which would do most of the work. Unlike an "axe" beheader, a guillotine was a "weapon of mass destruction" in a way that the axe was not. The White Rose people were regarded as "criminals," but not the worst of the worst, see the next section.

Victims had ropes tied to their necks, were dropped a few inches to "set" the rope, and choked to death, typically over a period of about 10-20 minutes.

The Nazi hangings, after the botched attempt on Hitler's life, were the worst sort of "bad" hanging. People were "strung up" in mid-air with no drop. Piano wire was used instead of rope to minimize the grip on the neck. Thus, the "killing" didn't start right away. It took some time for the force of gravity to establish a "choke," and then additional time for the choke to kill. A process that historically took a few minutes was prolonged for multiple hours.

One reason is that hanging is regarded to be one of the more disgraceful ways to kill a person, normally reserved for petty criminals, while beheading or shooting was regarded to be more 'honorable'. In a notable case, Admiral John Byng was executed by firing squad, after having been judged guilty of 'not having done his utmost' in the Battle of Minorca. This stands in contrast to the ordinary seamen of the same time period, who were hung when found guilty of a capital crime: desertion, striking a superior officer.

In the aftermath of Operation Valkyrie, the July 20 plot against the Nazis, Hitler ordered that the conspirators be 'hanged like cattle'. Many of the more prominent conspirators weren't just hanged, they were hanged with piano wire and no drop, to increase the agony. This resulted in slow strangulation, supposedly taking a few hours.

Ironically, the Nazis who were given the death penalty at the Nuremburg trials were all hung, even after the military members specifically requested a firing squad. It was a final, contemptuous gesture.

I know a lot about this subject so if I may, I will share it:

ANY QUESTIONS OR COMMENTS ARE WELCOME...

"Dark History" doesn't give a source for this supposed order from Hitler. I don't think the site is credible by itself, since it's just a blog.

From what I've read and heard about the topic (I can't give references either, since I didn't write the books and tv shows down), the Nazis just used the means of execution that had already been in place at these prisons before during the Weimar Republic. I'm not aware that the courts gave verdicts specifying the means of execution.

Not the answer you're looking for? Browse other questions tagged nazi-germany crime death-penalty or ask your own question.

14
Why was the swordsman of Calais chosen as Anne Boleyn's executioner?
4
Was it customary for an executioner in Elizabethan England to ask for forgiveness from the executed?

51
Is the claim that Hitler came to power democratically justified?
3
How did the Allies locate, identify and process Nazi War criminals?
1
What did NATO AFCENT commander Bennecke do during World War 2?
1
How and why did the progress of Army Group A differ from what the terrain in the Caucasus might suggest?