When did the Taxi become associated with the checkered pattern?

Taxi cabs tend to be linked to various colors or symbols, one I have noticed repeated over and over is the checkered pattern of alternating white and black. Is there an origin of this and how it became linked to taxi cabs or services? While it seems to be used in some countries, not all, and in some companies, not all, there has to be some kind of association between the two for it be a sort of global symbol (as much as many things are) for taxi services.

I wasn't able to find a definitive proof yet, but most likely it was because of the largest taxicab company (associated with both livery service AND manufacturing of taxicabs) that was called "Checker Taxi".

The 'Checker', particularly the 1956-82 A8/Marathon, remains the most famous taxi cab vehicle in the United States. The vehicle is comparable to the London Taxi in its nationally renowned styling, which went unchanged throughout its use, and also for its iconic status.

In 1940, Parmalee (including Yellow and Checker Cab) became the largest cab company in the United States.

The cars themselves had distinctive checker-marks on the sides, matching the company logo: 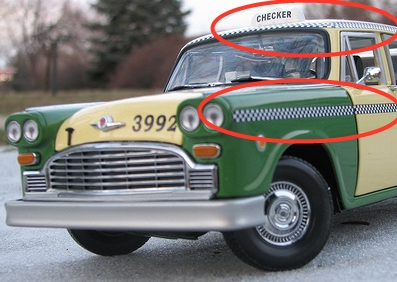 I have read unsubstantiated rumors as to the origin of the company's logo to be:

Under Markin, Checker became the first cab company to hire African - American drivers and the first to require that drivers pick up all fares, not just white ones. Some speculate this is why & where the B&W checker stripe originated (src)

In the United State, the Checker Taxi company of Chicago was established in 1917. The company used Commonwealth Mogul purpose built taxicabs built by Commonwealth Motors of Chicago. Markin Auto Body was the body supplier for the Mogul taxicabs. By 1922 Markin took over Commonwealth Motor, and changed the name to Checker Cab Manufacturing company. Markin also started to buy up taxicab operations across the country. He ultimately became one of the largest US taxicab operators.

His main competition was Yellow Cab operated by John Hertz also out of Chicago. Via trademark litigation in 1924 Markin was able to secure the use of Checkerboard decals and the Checker name for his manufacturing business and taxicab operations. Additionally he franchised the right to use Checkerboards and the Checker name to independent operators. Markin eventually took over Yellow Cab taxicab operations, and Hertz retired. By the late sixties Markin, under court order had to dissolve his taxicab empire. Checker Motors would spin off its various operations and the trademarks were not renewed. Today the use of Checkerboards is wildly used by independent cab operators. The Checker car was discontinued in 1982.

Not the answer you're looking for? Browse other questions tagged transportation automobiles or ask your own question.

28
When did Americans become safe from highway robbery?
16
When did streets get names?
13
When did covered wagons disappear from America?
10
Which car was the first to come with a cigarette lighter receptacle?
4
What did Sweden do with all the wrong-sided steering wheels after Högertrafikomläggningen?
4
When did the key advances in vehicle suspension happen?
7
Did any carriage manufacturers make the transition to automobile building?
4
When did springs first appear in or below vehicle seats?
11
Was red associated with “stop” or “danger” before railroads?