What was the reason for the geographical error in Churchill's "Iron Curtain" speech 5th March 1946?

In his celebrated speech, at which he used the term Iron Curtain at Fulton, Missouri, on 5th March 1946, with President Harry Truman present, Churchill said the following:

From Stettin in the Baltic to Trieste in the Adriatic an “Iron Curtain” has descended across the continent. Behind that line lie all the capitals of the ancient states of Central and Eastern Europe. Warsaw, Berlin, Prague, Vienna, Budapest, Belgrade, Bucharest and Sofia; all these famous cities and the populations around them lie in what I must call the Soviet sphere, and all are subject, in one form or another, not only to Soviet influence but to a very high and in some cases increasing measure of control from Moscow.

But of course if you draw the line from Stettin ("Szczecin" in Polish), it excludes the whole of what was to become "East Germany", or the Deutsche Demokratische Republik from the sphere of Soviet influence.

Now Churchill was making the speech long before Stalin's blockade and the Berlin Airlift, so arguably, it was not foreseen that the USSR would retain suzerainty over the eastern part of Germany in the long run.

However when Churchill then goes on to list the capitals which fell within "Soviet influence", he includes Berlin among them. However Berlin is west of a line from Stettin to Trieste - and hence not "behind" it.

Perhaps what WSC should have said was "From Lubeck on the Baltic to Trieste on the Adriatic...."

Was it just that Churchill got his geography wrong, or was there more to it than that?

That may be a simple geographical error. That happens to the best. However as Semaphore commented: "It isn't a geographical error. He didn't say "draw a straight line from…" In fact, in Europe at least, borders are almost never straight lines. He was simply stating that an "Iron Curtain" was being put in place that meandered across Europe (following the then current borders) from the Baltic to the Adriatic, separating East from West."

In this case an "error" like that may be quite unlikely. If you look at the time and the then current relations and treaties between the West and the Soviet Union then several other explanatory factors might come onto play.

First of all, the status of Germany was less well defined, being divided between administrative sections under allied control. This would of course include the four-sector city of Berlin. Whereas Poland was by then indeed under sole and direct control of the Soviets. (The Lübeck from the original question was not under Soviet control, but Britsh. While being quite close to the actual "curtain" that would make Lübeck also an "error" for geographical sticklers.)

The divided Germany came into being in several stages, always contested by some: bizone, different currencies introduced, the founding of West and East German states only in 1949. But that was seen as provisional and as late as 1952 the Soviets themselves held that status levitated.

If you look at the previously entirely German south coast of the Baltic Sea you will find that Stettin is the largest and most important sea port on that coast that was under full Soviet control. If you take into account that it was the most Western port with these features and also with a widely recognisable name.

Most importantly this city was an early violation of treaties and pacts from the Soviet side. The former deal said that the new Polish Western border was to be established at the Oder-Neisse-Linie. That "line" now obviously does not follow the name-sake rivers at the Baltic. The Soviets signed a treaty with Poland (Schweriner Grenzvertrag) that expressly and against the wills and wishes of the Western Allies, that included Stettin into the future Polish controlled territories.

It might be additionally quite symbolic of Churchill's very own attitude towards the settlements with the Soviets regarding the future Poland and Germany. While secure borders and a cleaned from too much nationalistic potential tensions Central and Eastern Europe was a goal for most proceedings and all sides, Churchill was wondering if they were not "Stuffing too much German food into the Polish goose". And Stettin was overwhelmingly German and part of Prussia for centuries.

That city is therefore not only the most recognisable and furthest Western city to express only the geographical extent. It was also the perfect symbol for souring relations and unilateral decisions from the Soviets that antagonised the West. Ease of communication, symbolic effect and reasonable geographical accuracy all fit together nicely to explain this choice: he wanted to drive home the point that he thought it very likely that everywhere the Soviets got boots on the ground they were quite likely to stay. And that this would be neither in the interest of the Western Allies, nor in the interest of the people living there.

Perhaps a more fundamental primer on lines and their defined versus figurative uses might be in order:
"In mathematics the notion of line or straight line was introduced by ancient mathematicians to represent straight objects (i.e., having no curvature) with negligible width and depth. Lines are an idealization of such objects."
Whereas in politics a border might also be called a "border-line", despite not being straight at all.
If one looks onto a curtain from above one sees a meandering, curvy back and forth and not a monotonous straight line. Therefore, even disregarding any history or traditional border concepts and forms within Europe, it still emphasises that Churchill will not have thought of a straight line that incorporated all the dots he mentioned.

But what if we insist on using a more rigid geometry for line? As in international relations the phrase sphere of influence is often used, one solution readily presents itself. Lets look at "Moscow's Sphere of Influence" as defined by Churchill in the speech: 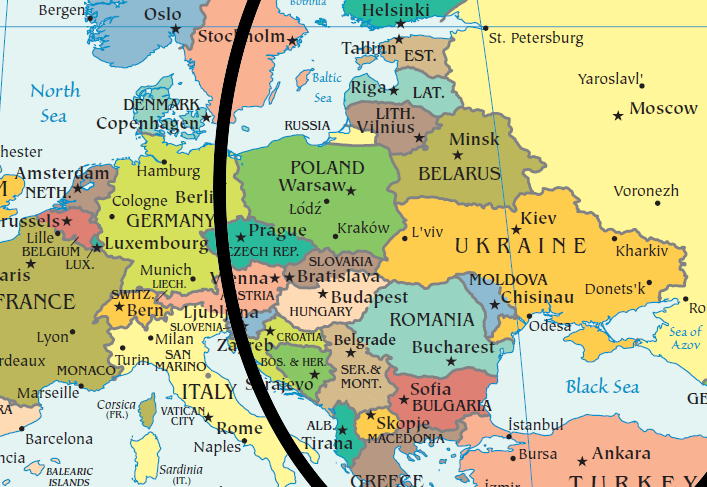 Admittedly not really centred on Moscow, but touching Stettin and Trieste while going over Berlin directly.

16
Austria and Iron Curtain during Cold War
6
What is / are the specific reason(s) for Vyacheslav Molotov's fall from grace with Joseph Stalin?
3
What was the dominant Soviet strategy for invading Germany in the 1980's?
3
What was the reason for the ubiquitous pigeon farms in Soviet cities?
1
Was the Iron curtain actually present at the time of the Fulton speech?
6
What was the Soviet reasoning for developing their Airborne Forces (VDV) into a powerful military branch?
49
During the breakup of the Soviet Union, on what basis was citizenship granted or withheld for each of the fifteen new republics?
20
What was the policy on academic research being published beyond the iron curtain?
3
Did the Balkans campaign delay Operation Barbarossa for the Nazis and was it therefore an important reason why they lost against the Soviets in WWII?