What is the difference between the Nobel Banquet and the Nobel Anniversary Dinner?

I understand that the Nobel Prizes are always presented in Sweden and Norway, but I'm confused as to why there was an additional event occurring on the same day.

The Nobel Banquet on December 10, 1945 was held by the Nobel Assembly at the Karolinska Institute which awards Nobel prizes for Physiology or Medicine. The winners in 1945 were Sir Alexander Fleming, Ernst Boris Chain and Sir Howard Walter Florey. The Nobel Assembly is one of the prize-awarding institutions of the Nobel Foundation.

The other prize-awarding institutions are the Royal Swedish Academy of Sciences (natural sciences and mathematics), the Swedish Academy (literature) and the Norwegian Nobel Committee (peace).

The American Nobel Anniversary Committee was founded by Albert Einstein and held it's first dinner on December 10th in 1941, Dec 10th being the anniversary of Alfred Nobel's death. In addition to remembering Alfred Nobel, it honours past Nobel prize winners. The evening includes a dinner, presentation of past Nobel laureates, and a forum with speeches by some of these former winners as well other notable figures. The committee which organized this annual event has no connection to the Nobel committees which decide on the prizes or to the Nobel Foundation.

A copy of the program for December 10, 1945 event (the 5th one) held at the Hotel Astor in New York can be seen here. It doesn't show what the topic of the forum was but U.S. Secretary of State Cordell Hull (not present) was honoured for winning the Peace Prize). At the 1944 event the title was Education for Peace where speakers included five past winners as well as J. William Fulbright and 20th Century Fox film studio head Darryl F. Zanuck. By 1958, it appears that the dinner had been moved to January 11th (a broadcast with Mike Wallace can be seen here). 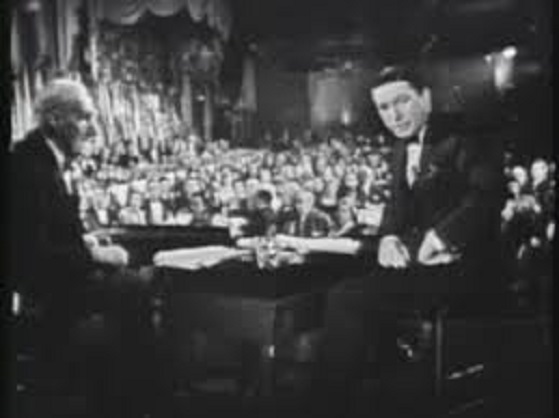 "In this special telecast from the American Nobel Anniversary Committee Dinner and Forum at the Waldorf-Astoria in New York, Dr. Linus Pauling, Pearl S. Buck, Clarence Pickett, and Sir John Boyd Orr talk about peace in a world threatened by war." Image and text source

In 1964, an off-shoot of the American Nobel Anniversary Committee, the American Nobel Memorial Foundation, Inc., was charged with fraud and misrepresentation. The Committee appears to keep a low profile these days; it has a Facebook page which, bizarrely, has mostly posts of football/soccer players. The committee is based in Wetsport, Connecticut.

Not the answer you're looking for? Browse other questions tagged united-states 20th-century names or ask your own question.