Why didn’t Christianity spread southwards from Ethiopia in the Middle Ages?

Christianity, having begun in 1st Century Roman Palestine, in the next few centuries spread rapidly across the Roman Empire and beyond, including beyond the southern boundary of Roman Egypt, via the Red Sea and the Nile. The Kingdom of Axum in what is now Ethiopia under influence from missionaries from Egypt became Christian as early as in the fourth century AD, earlier than much of Europe, establishing a literate, Christian civilization with monasteries and bishops that survives in Ethiopia to this day.

However, if Christianity could spread that far south that early, at least 2 centuries before it had to contend with Islam as a rival, why did it stop there the next thousand years or more? Why didn’t it spread further into Sub-Saharan Africa until brought there by Europeans from the sixteenth century onwards?

PS Thank you TED and MA Golding for your replies. My gut reaction is that TED is basically right, that there was something to do with the level of development of a society that made it easier for it to adopt a scripture based religion like Christianity.

What is now Ethiopia was already in contact with civilizations in Arabia and the Nile Valley which probably made it different from societies further south in sub-Saharan Africa at that time, although we know little of them due to lack of written records and the limited amount of archaeology that has been done.

I do not think presence or absence of 'colonialism' is as important. Christianity in around the 4th Century managed to spread not only within the Roman Empire but to Germanic tribes beyond the frontier of the Empire like the Goths and Vandals (even if they initially adopted 'Arian' rather than Catholic Christianity), to Mesopotamia and as I have said to Ethiopia, which was never conquered by the Romans and established its own independent kingdom.

There wasn't anything for it to spread south to.

OK, there is one exception that Mr. de Bernardy pointed out in the comments. Somalia is south of Ethiopia (when it wasn't part of its empire), and there were conversions there. Many people living there were Jewish and Christian, and some of the Jewish converts may have reached as far south as modern Tanzania. After Mohammed, most of the folks in Somalia converted to Islam, and stayed with that religon throughout the middle ages. Of course this region had strong trading and cultural contacts with the Middle East. So I think Somalia may be useful as the exception that proves the rule.

Christianity is what is often called a religion of the book. It is a scriptural religion, which means it really is designed for use within a literate society. That isn't to say that illiterate people can't follow it, but someone in the society needs to be able to read from scriptures.

Additionally, converting to a trans-national religion isn't all about belief. More fundamentally, its a good way to acknowledge existing trade and cultural ties with another country/state/region, and to actively strengthen them. If no such ties exist, and the country's people and rulers don't want them, there's no real use to them for that country's religion.

Somalia aside, there were no other literate societies in Africa south of Ethiopia in the Middle Ages. We don't even know of many states at all south of there. There was the Bachwezi in the Great Lakes area around 1300, and Great Zimbabwe in South Africa from around 1100, but both appear to have been illiterate societies, the later with no known external contacts with any other society. The other known pre-colonial native African states south of there (Lunda and Luba) were founded after the 1400's, and their contacts north would have likely been with Islamic societies. 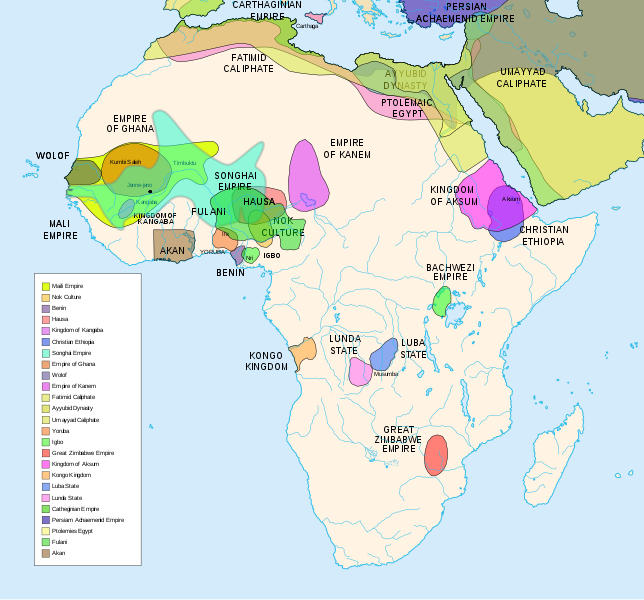 The Muslims conquered Egypt a few decades later and began expanding south, but were blocked by the Christian states in the Sudan such as Makuria. But Muslim traders introduced Islam and the country gradually converted to Islam by about the 14th century or so. Then any Ethiopian efforts to expand west into the Nile valley would have been strongly resisted by the mainly Muslim population.

Meanwhile Arab traders established many trading posts and cities along the east coast of Africa and naturally introduced Islam, which spread from those communities rapidly or slowly in various cases.

So by then the Ethiopians would have had to expand directly south avoiding the Muslim realms in the Nile valley to the west and the Muslim lands along the African coast to the east, or else having to risk fighting fierce Muslim opposition to Christian conquests.

And it is possible that Ethiopian traders and missionaries did convert many Africans in distant regions, and that the later success of Muslims in converting Africans to Islam might have been made easier by some people in those regions already being Christian or part Christian.

Not the answer you're looking for? Browse other questions tagged christianity ethiopia or ask your own question.

11
Why was ancient Christianity more successful than the Roman pantheon and Judaism in gaining followers?
77
Why weren't Indians converted en masse to Islam or Christianity?
16
What motivated Germanic tribes to accept Christianity?
13
Why did Christianity disappear in North-Western Africa?
11
How long did belief in the Egyptian sun god Ra last?
21
How did Christianity replace Roman Paganism and other ancient religions?
7
Are the Sabean people of Cushitic or Ethiopian origin?