Was the communication between Spitfire and other fighters' pilots encrypted? 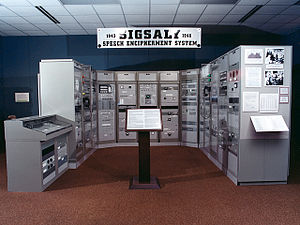 If machines like SIGSALLY were occupying so much space like in the picture above, were the pilots' communication encrypted or somehow obscured in order to prevent the enemy from eavesdropping on the time of World War II?

I know voice cryptography only started to develop that times.

I think it's safe to conclude that no fighter plane radios were encrypted, due to requiring extremely bulky equipment at the time. Communication between enemy fighters was theoretically possible, since all you need to do is tune in to the enemy's frequency, but most planes could only use a very limited set of preset frequencies. Of course this does mean planes with radio operators and ground stations could tune in and capture intelligence such as the enemy's heading and squadron sizes, attempt to jam the frequency, or (in the case of navigation radars) even misdirect the enemy's target.

Even extremely simple countermeasures like frequency hopping were not possible, since these require computing technology that was simply unavailable at the time. Instead, fighters employed techniques such as radio silence, codenames and frequently-changed callsigns, which last to this day.

More specifically, in the Spitfire's case, one radio it used was the TR1133 which could only have 4 preset frequencies operated via push buttons. Fighter pilots probably had more on their plate to worry about than attempt to find the enemy's frequency.

Encryption can very well be done on quite small portable devices, also during WWII. The famous German Enigma machine was about as large as a type-writer, and that was one of the most advanced and complex encryption of the time. Smaller machines with simpler encryption also existed.

However, encrypted communications required a separate radio person who does nothing but send and receive in Morse-code and encrypt and decrypt the messages. So fighter pilots did not do that for obvious reasons. It also takes time to encrypt and decrypt, so it can't be used for anything urgent.

Real-time encryption of voice communications did not become really practical until the 80's, and was then done through frequency-hopping.

Speech inversion was a common mode of encryption for voice communications in WWII...but it was used exclusively for ground based (mostly land line) communication. It used many vacuum tubes and was relatively unstable...and tended to drift and lose lock. Aircraft voice communication from fighters was in the clear...although users did use codes and misleading information. Morse code was used from bombers....but it too was in the clear for the most part using standard Q codes to shorten message length and time.

7
What was the largest empire in terms of time of communication between its two ends?
3
Where can I find documents on the 1992 fight between French soldiers and Somalian fighters?
3
How did the primary means of communication between the British government in Delhi and UK change during WW2?
4
Did the United States taxpayer fund the development of China's backbone fighter plane?
18
Why did the Japanese attack the Aleutians at the same time as Midway?
15
When was the first electrical intra-battlefield communication?
40
Why couldn't Japan crack the Navajo Code in WW2, when they captured a Navajo native speaker?
10
When was it first noticed that airplane passengers really seemed to like tomato juice?