Was hay invented only in the Middle Ages in Europe?

I stumbled upon the following remark from Freeman Dyson:

The most important invention of the last two thousand years was hay. In the classical world of Greece and Rome and in all earlier times, there was no hay. Civilization could exist only in warm climates where horses could stay alive through the winter by grazing. Without grass in winter you could not have horses, and without horses you could not have urban civilization. Some time during the so-called dark ages, some unknown genius invented hay, forests were turned into meadows, hay was reaped and stored, and civilization moved north over the Alps. So hay gave birth to Vienna and Paris and London and Berlin, and later to Moscow and New York.

Is it really true, that hay was only invented in the Middle Ages in Europe? Is hay really such an important invention? What about other civilization like e.g. the Mongols who used a lot of horses. Didn't they also have hay?

The Roman writer on agriculture Columella, who died around AD 70, gives a detailed description of the manufacture of hay (Latin: faenum) in his de re rustica 2.18, which reads as follows in the Loeb translation:

"It is best, moreover, that hay be cut before it begins to wither, as a greater quantity of it is harvested and it affords a more agreeable food for cattle. But a middle course should be followed in the curing, that it be gathered neither when very dry nor, on the other hand, while still green — in the one case because it is no better than straw if it has lost all its sap, and in the other because, if it has kept too much of it, it rots in the loft and often, when it becomes heated, it breeds fire and starts a blaze. Sometimes, too, when we have cut our hay a rain surprises us; and if the hay is soaked through it is useless to move it while wet, but better to let the upper side of it dry out in the sun.

2 Only then shall we turn it, and, when it is dry on both sides, we shall bring it together in windrows and then bind it up in bundles. And above all we shall lose no time in putting it under cover; or, if it is not convenient for the hay to be carried to the farmstead or tied into bundles, it will be well at any rate that all of it that had been dried out to the proper extent be built up into cocks and that these be topped off with very sharp peaks.

3 For by this method hay is very conveniently protected from rains; and even if there is no rain, it is still not amiss to build the aforesaid cocks, so that any moisture remaining in the hay may sweat and dry out in the piles. For this reason wise husbandmen, even in the case of hay brought under cover, do not store it away until they have allowed it to heat and cool for a few days in a loose pile. But now after the haymaking comes attention to the grain harvest; and that we may properly gather it, we must first put in readiness the implements with which the crops are harvested."

So much for the claim that "in the classical world of Greece and Rome and in all earlier times, there was no hay".

I think Freeman Dyson may have a point, but his facts seem to lack foundation. One only needs hay for horses that lack sufficient winter pasture for forage.

Cattle were domesticated by 6,000 BC, and horses by 4,000 BC. Horses are able to forage during winter by using their hoofs to paw through ice and snow, and to break ice to get water. Unless the weather is very severe horses do not require winter fodder if they can forage. This is discussed in The Horse, the Wheel, and Language: How Bronze-Age Riders from the Eurasian Steppes Shaped the Modern World.

Most cattle are not able to fare so well, as they tend to push the snow aside with their noses; once ice forms they are often not able to feed themselves or drink. Thus one must bring cattle in, and feed them fodder. Today's hay often consists of alfalfa, clover, and timothy grass; it also requires careful drying if it is not to become moldy. Other types of fodder include turnips - our neighbors fed turnips to their turkeys - and other vegetable matter. The Romans used turnips, according to Pliny

When did farmers start "making hay" for winter fodder? Making Hay in Colonial Pennsylvania describes recent times, and why it was required. The history of forage preservation mentions evidence from ancient Egypt, from the Middle East, circa 700 BC, and early Rome, where it was recorded that German tribes, the "Teutons", buried green forage in a pit, covered with dung. The methods discussed are called ensiling, methods for creating silage.

Hay is different from silage because it is dried. The article assumes that making hay is just as old as making silage - because it is simpler. All you do is cut the hay, and let it dry in the sun. Making hay in Germany, which lacks sun, but not rain! makes silage more important. Perhaps the hay rick was invented in Germany, during the middle ages. 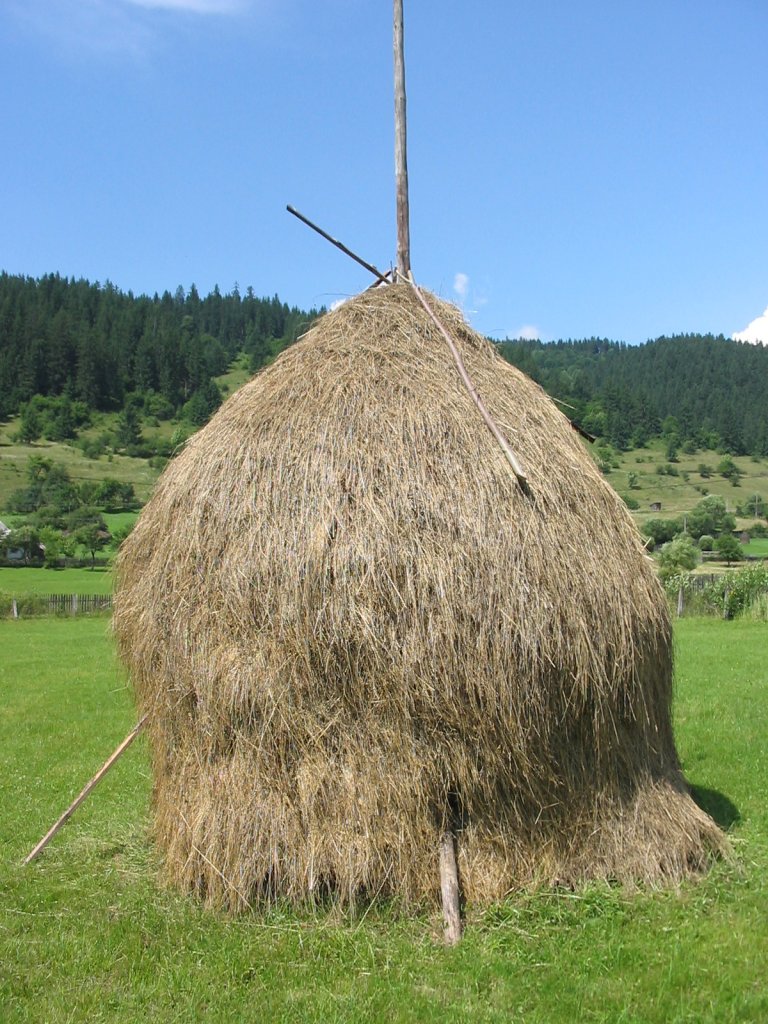 Loose stacked hay built around a central pole, supported by side poles in Romania

According to another historical account the earliest remains of hay were found in central European archaeological sites from the late stone age. Dyson has the right place but wrong time. The Romans, Greeks, and Chinese might have used hay, but it is one thing that predates their civilizations. Again its earliest finds are in Europe north of the alps and east of the Rhine centuries before the middle ages.

I too believe Dyson has a point. The use of dried forage grasses may have been known prior to the middle ages, but the practice probably expanded significantly and with greater sophistication during the increasing agricultural settlement of northern Europe. Having a source of fodder for cattle also would have given north Europeans greater resilience in the face of climate change -- which Kyle Harper points to in The Fate of Rome as a significant challenge even in ancient times. Northern Europe also had significantly more usable land and a wetter climate more suitable to producing forage, and the surplus would have supported a larger population of cattle and a more protein-rich diet for humans in medieval times. I'm wondering if besides the use of hay "stacks" there is any archaeological evidence for or studies of the use of barns (for storage and protection of animals). One certainly sees their use in some medieval art as well as the extensive use of the scythe (and hay stacks) as in the illustrations of the Très Riches Heures du Duc de Berry, etc., but such evidence is hard to quantify.