What happened to University College of San Francisco?

In 1859, the Reverend George Burrowes founded University College in San Francisco. Confusingly, it was also known as City College. Burrowes advertised the school in the Daily Alta California newspaper. 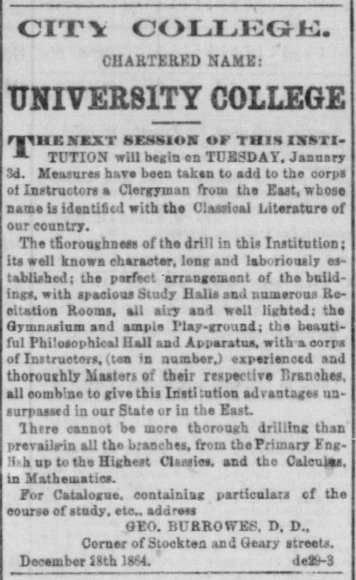 First operating near downtown, by 1862 it had also obtained land farther south in a greenfield location called University Mound. The district was laid out around the college, with streets in one direction all named after famous schools (Dartmouth, Göttingen, Colby) and in the other direction after educators, particularly university presidents (Timothy Dwight, Benjamin Silliman, Francis Wayland). A map from 1863 shows a "University College Grounds": 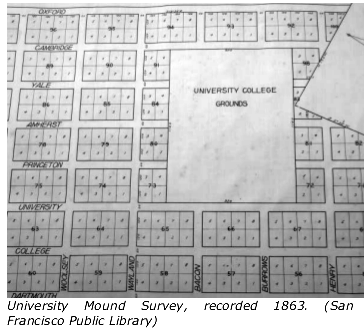 By the mid-1880s the College seems to be gone. In 1884 James Lick's estate bought up 25 acres including a "college building" to build the Lick Old Ladies Home, and in 1885 a reservoir went in. My friend Elisa unearthed this map: 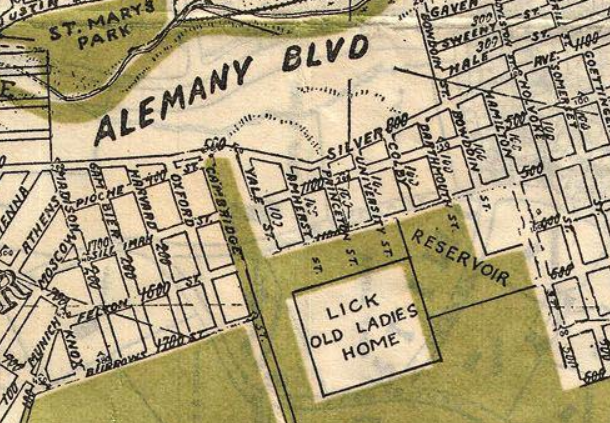 When did University College abandon the University Mound campus? Did the university go out of business or merge with another school?

I have managed to locate online copies of the San Francisco Journal of George Burrowes, 1858-1875 (Edited by Charles A. Anderson, and with a biographical sketch by Clifford M. Drury), which might now provide a more-or-less definitive answer to your question. This was published in three parts in the Journal of the Presbyterian Historical Society and is available to read on JSTOR:

Unless otherwise cited, quotations are from the journal or the associated biographical sketch.

I should, perhaps, first highlight the caveat that Professor Drury makes in his biographical sketch:

Undoubtedly Dr. Burrowes wrote these reminiscences with an eye to the future. He was the last of the participants in the scenes described to pass away.

Founding of the College

The driving force behind the establishment of the City College seems to have been Dr W.A. Scott who had lobbied the Board of Education to:

commission some qualified person to open a Presbyterian school in California with the expectation that such a school would be the beginning of a college.

adopted some resolutions offered by Dr. Scott which called upon the Synod to establish a Board of Regents to secure a site, erect a building, and take such other steps as might be necessary to run a school with Dr. Burrowes as its Principal.

The school was founded in 1859, but as the article observes,

Dr. Scott's strong sympathy with the South finally forced him to leave San Francisco in the early fall of 1861.

(he had been hanged in effigy on Sunday 22 September 1861!), and this appears to have marked the beginning of a breach with the Synod of the Pacific that culminated with the 1863 charter, and re-naming of the school as University College, San Francisco (although it was by no means a "university" in the modern sense of the word).

Although the "new" college had an independent Board of Trustees, the previous Board of Regents had

tried to safeguard the Presbyterian connection to the college by writing into the charter the requirement that at least two-thirds of the Trustees must be members of the Presbyterian Church. However, no article of the charter could prevent the inclusion of men as Trustees who had no understanding of what a College was supposed to be.

Indeed, it seems that elements within the Synod would continue to refer to the college as the Presbyterian City College, although I've been unable to find any reference to the college by that name in any other sources (even Dr Burrowes's journal).

Dr. William Alexander, who was employed as Principal of City College from 1871 to 1875, would write in defence of the synod in retrospect:

"The failure was not due to the ministers, but to a lot of laymen who had never been to college and did not know what a college is, and yet were too self-important "to take counsel of those who did know. And although they were men of wealth and high standing in the city, they were not liberal."

The college grew, and expanded to include multiple sites or campuses. These included the new building at University Mound (which would be destroyed in a fire in 1875), the site on Halght street, and the offices at the corner of Stockton & Geary Streets, mentioned in their adverts). However, tensions between Dr Burrowes & the Board of Trustees grew, and culminated in his resignation on health grounds in June 1865, when he and his wife returned to New York.

Burrowes returned to San Francisco in 1869, and accepted the post of President of University Mound College (this doesn't seem to have been a separate college, but rather a department or campus of University College, San Francisco) in January 1870. He would resign from that post in 1872.

There is an article describing the (brief) history and current situation of the college in the Pacific Rural Press, Volume 5, Number 5, 1 February 1873. This article includes a picture of the college as it then was: 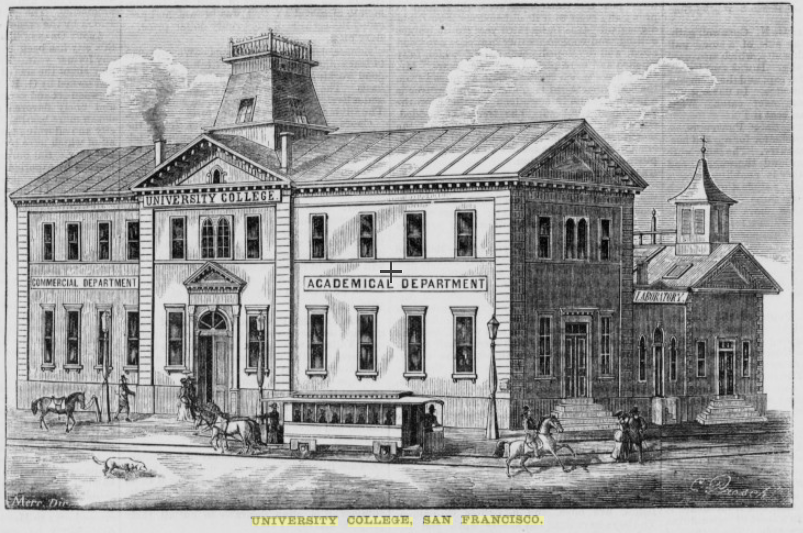 It may be worth noting that by 1873, the Pacific Business College (the "oldest and best Commercial School on the coast") was also a part of University College, San Francisco.

The University Mound building was destroyed by a fire on 5 April 1875 (Daily Alta California, Volume 27, Number 9134, 6 April 1875). Burrowes records in his journal that, shortly before this event, his library (which he had donated to the new Theological Seminary) had been:

removed to the rooms of this Seminary in the City College, corner of Stockton and Geary Streets.

This shows that the seminary was renting rooms at City College in 1875.

The college's building at University Mound would be subsequently re-built following the fire.

Dr W. A. Scott had returned to California in January 1870. He and Dr William Alexander led a drive to establish the San Francisco Theological Seminary in 1871, and the Synod had accepted their plan in October that year.

Burrowes is recorded as the (unpaid) Head of Hebrew Language and Literature at the seminary from 4 December 1871. He would remain in that role until 1890, when he became Emeritus Professor and retired. It seems likely that his resignation from his post as President of University Mound College was not unrelated to his acceptance of this new role.

I found a notice under Real Estate Notes in the Daily Alta California, Volume 29, Number 9887, 3 May 1877, recording the transfer of title from University College to San Francisco Theological Seminary of a lot on the south side of Halght street for the sum of $12,000.

This site would be the home of the Seminary until it moved to its present campus at San Anselmo in 1892.

Closure of the College

The biographical sketch by Professor Drury states that:

City College suffered foreclosure and was no longer in existence in 1881.

However, the evidence does suggest that the college did suffer financial problems (perhaps as a result of financial mismanagement, although Burrowes seems to imply that it was due to divine wrath resulting from the college's treatment of him when he was in charge), and suffered foreclosure at some point in the early 1880s.

Professor Drury does on to say that the then President of University Mound College, Professor Gamble:

moved University Mound School to Lyton Spring where an effort was made to organize a Presbyterian College, but this failed.

That, together with the newspaper article quoted above suggests that the foreclosure probably occured in about 1883/1884.

We cannot be certain what happened to all the assets of University College, San Francisco following the foreclosure. However, in 1888, the Pacific Rural Press published an obituary for James E. Wilson that included the following information

Afterward Mr. Wilson taught in New England schools for nearly two years. In April, 1867, he came to California, since which period, until very recently, he has been actively engaged in the profession of teaching. His first experience as a teacher in this State was with the McClure Military Academy, Oakland. Subsequently, he was associated for two years with the faculty of the City College, an educational institution that has since been merged into the University of the Pacific.

The obvious candidates for the parts that were 'merged' include the Medical School, The Medical College of the Pacific, (which, as you mentioned in the question, was actually founded as a joint venture with the University of the Pacific, and the Pacific Business College.

The Rev George Burrowes is credited with being one of the founders of the San Francisco (Presbyterian) Theological Seminary(SFTS) or City College or Presbyterian City College.

I found the SFTS association through his grave stone given below and then was able to corroborate that the SFTS originally used the names City College or Presbyterian City College. 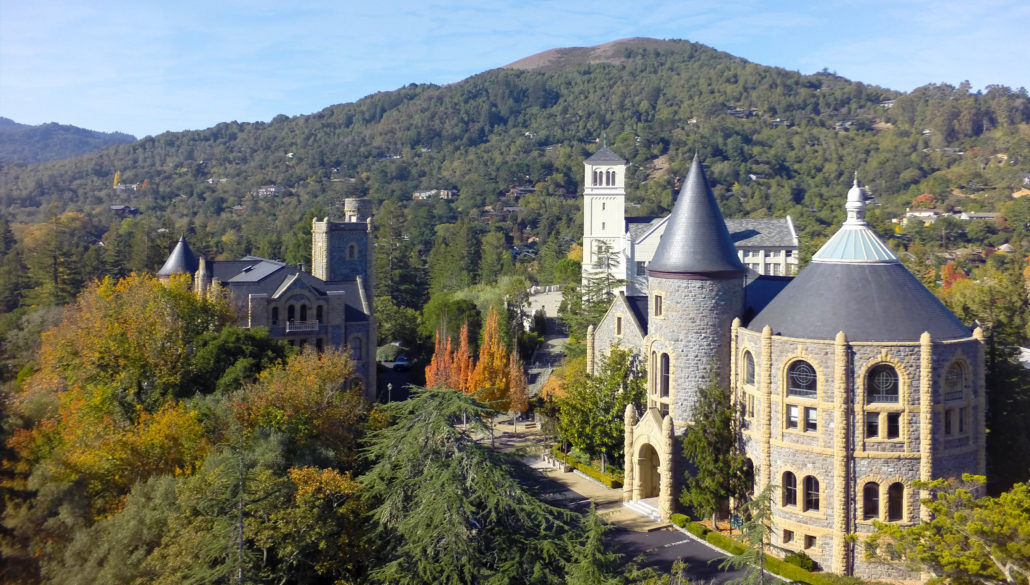 In 1890 the City College of San Francisco moved to a 14-acre hilltop site in San Anselmo, and changed it's name to the San Francisco Theological Seminary(SFTS) where it remains to this day.

I started by looking for Reverend George Burrowes grave site to see what it would tell me and found this. 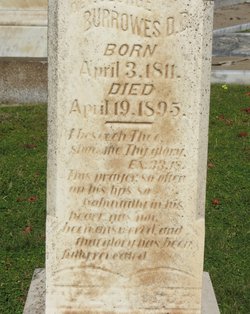 A third name ever to be held in remembrance as that as one of the founders of the San Francisco Theological Seminary is the name of Rev. Dr. George Burrowes. He began his services as Professor of the Hebrew Language and Literature with the first term of the Seminary, and for almost a quarter of a century he continued his remarkable expositions of Scripture and in the manifestation of a beautiful Christian life.

Then I searched for San Francisco Theological Seminary and found this

In 1871, SFTS (San Francisco Theological Seminary.) began with four professors and four students meeting for instruction at the Presbyterian City College located in what now is Union Square. Six years later, the seminary moved to its own building next to the City College building on Haight Street.

Then I started researching the history of the SFTS and found a quote which equates the SFTS with the Presbyterian City College.

San Francisco Theological Seminary
The Seminary was founded in 1871 in San Francisco as Presbyterian City College.

In 1890 the SFTS moved to a 14-acre hilltop site in San Anselmo, where it remains to this day.

btw.. James Lick who opened up that Old Lady's home was pretty interesting to read up on too.

James Lick
(August 25, 1796 – October 1, 1876) At the time of his death, he was the wealthiest man in California, and left the majority of his estate to social and scientific causes.

Not the answer you're looking for? Browse other questions tagged united-states california education or ask your own question.