Did any Moors accompany Hernando de Soto in his exploration of Mississippi?

I was reading about Hernando de Soto and saw William Powell's painting (Relevant bit cropped and added below): 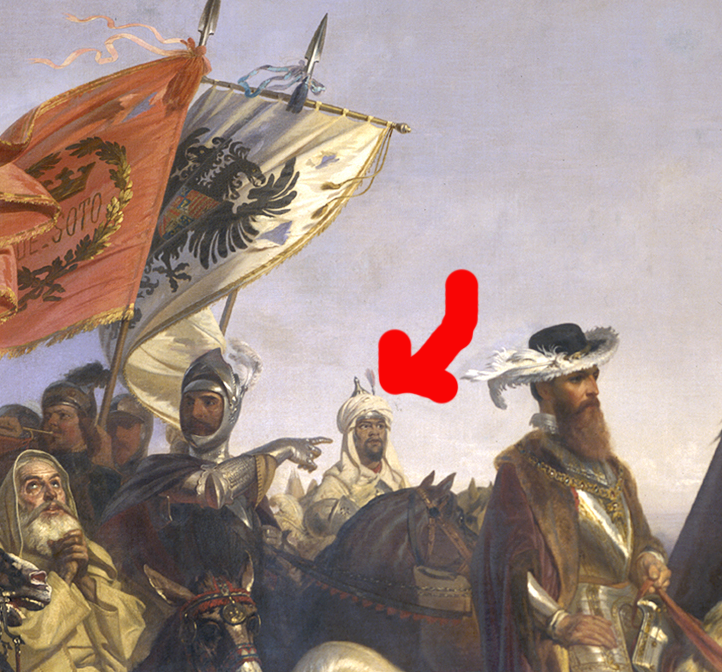 The odd thing (Marked with a red arrow) is the man who looks Moorish and is dressed in Moorish Military attire unlike the other people in the party. Of course the painting was created some 300 years after Hernando died so it can hardly be considered historical evidence. Not to mention, it is unlikely that the Spanish would have allowed the converted Andalusians to dress in that fashion. But that made me think if there were any Moors (That is, the Conquered people of Muslim Al-Andalus) who accompanied him in his expeditions.

I have looked about (Perhaps not that well, American history is not my forte) but all the mentions of Hernando and Moors that I have found are in context of his upbringing and the downfall of Muslim Andalusia in 1492, eight years before he was born or the Moors that came with other Conquistadors.

So my question is, did any Moors accompany Hernando de Soto (specifically him, not any other Conquistadors)? If not, why did the painter William H. Powell paint a Moor there?

I understand that there are four surviving accounts of de Soto's expedition.

Three of those accounts were written by survivors:

The fourth account, by Garcilaso de la Vega, was written much later, and is believed to be a compilation of testimony collected from a number of survivors from the expedition over time.

Translations of the surviving accounts, together with other materials relating to the De Soto expedition, have been published in The De Soto Chronicles: The Expedition of Hernando de Soto to North America in 1539–1543, edited by Lawrence A. Clayton, , James Knight Vernon Jr., and Edward C. Moore (University of Alabama Press, 1993).

The first volume is available to read on archive.org.

Of particular interest here is the 'Elvas narrative' (published in volume 1 of The De Soto Chronicles) which describes the gathering of the company.

Four men of possible Moorish origins have been noted.

(That's out of about 700 people who sailed with the expedition).

So, the presence of people of Moorish origins on de Soto's expedition seems perfectly plausible.

Of course, it's quite possible that this fact was entirely unknown to William Henry Powell, who was - as you observed - painting more than 300 years after the events that he was depicting.

The entire image in question can be seen here. Under the image is a numbered scene describing the images individuals. The person in question is listed as Moorish Servant.

A little more research into De Sotos expedition leads to this page, which confirms a number of slaves and servants were included in the expedition:

It would seem, combined with the timing you mention concerning the fall of Moorish Andalusia, the painter chose to portray one of those servants as Moorish.

A book from 1853, William H. Powell's historical picture of the discovery of the Mississippi ... By Henri L. Stuart has this passage concerning this:

Why did Powell paint a Moor?

Because there was a famous Moorish slave in the New World at the time.

One of earliest prominent first hand accounts of the exploration of the modern South East US was written by Cabeza de Vaca, a Spanish explorer who survived the disastrous Panfilo de Navarez expedition of 1527; 15 years before de Soto. One four men survived the expedition, one was Estavancio, a Moor described as brown-skinned.

Cabeza de Vaca's book was written in 1542, the same year de Soto died in Mississippi; his adventures had lasted from roughly 1528 to 1536. This book is probably the single best primary source for de Soto's expedition due to its literary merit and anthropological detail, even though at least two surviving records were written by members of the de Soto expedition.

Not the answer you're looking for? Browse other questions tagged spain colonial-america art renaissance age-of-discovery or ask your own question.

14
What led Extremadurans to take a leading role in the conquest of Spain's territories in the Americas?
6
Did any of these artists ever meet?
2
Did any plantation/hacienda/fazenda owner free all his slaves?
1
Did Anza record exactly who came along on his expedition?
4
What is the drawing in this ekphrastic poem?
3
Perceptions and relationships of 14-15th century Spaniards / Romani / Moors
2
When did James Cook's wife learn about his death?