Why did the baths of Bath need a hypocaust?

Bath, England has 3 natural hot springs. The Romans built a place of worship and a thermae around the springs. Why did Bath need a hypocaust if the water was already 47C hot just from the geothermal energy? What water did they use for the frigidarium and the other cold bath?

The water alone in Bath was warm enough, sure. But Britannia is quite chilly almost year round and people were very scantily clad, if at all, when perusing these establishments. Keep in mind that a visit could take so long that they often had libraries within the baths. If you have a hypocaustum running through your bath construction you can heat the water, the floors around the pools and the walls! Way more comfy. If you just have a hot pool and get cold feet immediately when getting out of it the relaxation is severely limited. Bringing the hypocaustum in one of the thermae up to temperature could take two days.

Why put a hypocaust under a pool when hot springs are available? These waters come out warm to hot, but once they are no longer in contact with their geo-thermal heat source, they tend to cool down over time. Unless you keep them flowing constantly at high volume with high temperature, they will not keep this desired hot temperature. As hypocausts are a standard architectural feature of such a batch anyway, they are also used to regulate the hottest pool temperature. Although when really needed, the water was heated more directly at the point where the heat was generated – in the heating house (at the boiler, so to speak).

When Gaius Sergius Orata invented and Vitruvius developed it further, these hypocausts were also planned for in much warmer climates than Britannia, like Italy, Arabia etc.

Hypocaust at the Baths

Now the Romans, they were no strangers to bathing, as they would often apply tremendous effort and resources towards creating not only the perfect baths, but the perfect bathing system. This would typically involve visiting a series of baths, each with a different name and temperature. First up was the caldarium, a nigh-scalding (or just very, very hot) bath and was basically just there for a quick, hot plunge. Next stop would be the tepidarium, and – just as it sounds – this was kept at a constant tepid or mild temperature, where bathers would casually relax and unwind. Last up was the frigidarium, which was a cold plunge bath, which would close the pores that had been opened in the tepidarium, thus ending the cycle of typical Roman bathing.

Now evidently, you would have a series of baths that needed to be kept at varying temperature, which would have required a series feat of engineering/heating skill. This came about in the construction of a series of hypocausts spanning most of the bathing areas, yet cordoned off appropriately to allowed for the various baths to be heated to the requisite temperature and constantly monitored to ensure that this bath was hot and another bath was running at tepidarium temperature.

The Roman architect Vitruvius put some serious thought into just how the hypocaust system could best be put to use in the baths and came up with various numbers of ways in which the efficiency of fuel could be optimised (hot baths next to warm baths next to cold baths, for example, a seemingly obvious chain). Vitruvius even put to use an idea via which the temperature could be accurately controlled – a Roman-day thermostat, if you will – via a series of bronze ventilators that would be situated in the domed ceiling of the various bathing areas. 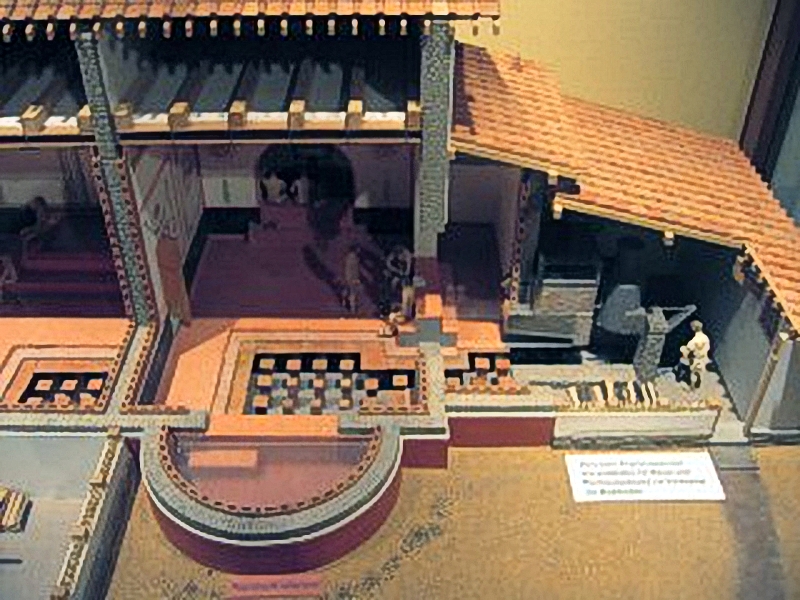 In Bath, the local museum displays Changing Rooms and Saunas with an actual projection video of reconstructed Roman patrons and their activities. In Heated Rooms and Plunge Pools:

See the cold circular plunge pool which is brought to life with animated projections, and the hot rooms which were heated in Roman times using the hypocaust system.

The western range of baths includes a sequence of pools and heated rooms with good surviving hypocaust pilae showing how their heating system would have worked. The cold circular plunge pool is 1.6 metres deep, and just looking at it makes you shiver!

A film of lifesize bathers is projected on to the walls of the Circular Bath, to show how it was probably used in Roman times. The 'shows' occur every few minutes and last about 90 seconds.

Craig Andrew Harvey: "Tubuli and their Use in Roman Arabia, with a Focus on Humayma (Ancient Hauarra)", Thesis, Queen’s University, 2011. (PDF)

Not the answer you're looking for? Browse other questions tagged ancient-rome roman-empire england or ask your own question.

22
What role did the Eastern Roman Empire play in the fall of the Western Roman Empire?
47
How did the Roman state verify citizenship?
10
How did the Romans supply water in winter?
18
Why did Nero order many of the Pisonian conspirators to commit suicide instead of having them executed by the sword?
9
Why did Constantius Chlorus decide to become a Flavius?
8
Were slaves allowed to use the Roman baths?
2
Why did Romans use the sesterce in written monetary records when the coin itself was so rarely used?
2
Why did Rome adopt Greek culture?