When and how was the cairn structure in the “Sea of Galilee” covered in water?

In 2013 Israeli researchers from Tel Aviv university discovered a large cairn, buried under the water of the freshwater lake "Sea of Galilee" in northern part of state of Israel:

I understand that the structure is about 12 meters long and buried about 5-10 meters under water (considering shifts in water level in that lake).

I further understand since 2013 there is no further published data about this structure anywhere but there might be data in peer reviewed journals I can't access (please share data if you have access in an answer):

When and how was the cairn structure in the "Sea of Galilee" covered in water?

This site might have some aspect of a Megalith; I haven't seen enough pictures of it to determine.

It appears that water levels in the Jordan valley have moved around greatly. Between 70,000 and 12,000 BP there was actually a lake covering the entire valley which has been named Lake Lisan 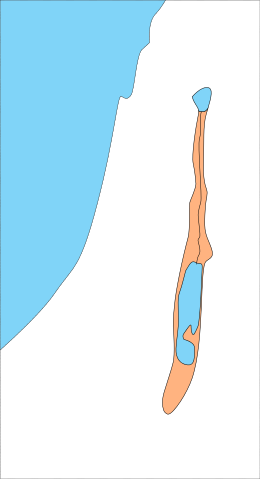 I believe this range roughly corresponds to the last glacial period, which apparently affected the weather in this region of the Middle East in a way that gave it much more rainfall than it gets today.

This changed drastically with the onset of the interglacial (melting), causing the area to lose water down to about 500 meters below sea level by 13,000 BC. If my math isn't failing me, that would be enough to completely dry up the area around the modern Sea of Galilee.

In fact, compared to that level of change, drying up or refilling the Sea of Galilee is really small potatoes. Its 215 meters below sea level, and only 43 meters at its deepest point. Minor climate or rainfall pattern changes would be more than enough to make drastic changes in its shoreline. In fact, it looks like we use the existence or absence of those "Early Natufian" archeological sites to plot more recent lake levels. Based on those it appears that the shoreline varied during that period from 230 to 215m below sea level. Today it is at about -215.

The Sea of Galilee "monument" might be the holy mountain built by Enmerkar, one of the earliest kings in Mesopotamia. He reigned before anything else in Mesopotamia happened. He reigned not only before the Sumerians came from Dilmun, but before the land of Dilmun was even founded. He came to the throne when his father went into the sea and disappeared. It is not clear what sea the texts intend, but it might have been the Sea of Galilee. Enmerkar invaded the land of Aratta in the mountains north of Mesopotamia. After a year long battle, he defeated the people of Aratta. He found a holy mountain used by them. He demanded that the people of Aratta bring stones from the mountains to build a holy mountain for him near his home. He was followed to the throne by his friend and general (named Lulugabad - spelling???) His son in turn was the famous Gilgamesh of the Gilgamesh Epic. Enmerkar was mentioned in the earliest texts from Mesopotamia that can actually be translated. It is unclear exactly if and when he reigned, and surviving texts include both early and later material. However, the best case may be that he reigned at the end of the Younger Dryas when the world had been devastated by the return of full glacial cold. That drought would have lowered the Sea of Galilee far enough that the Sea of Galilee monument could have been built on dry ground. The Sea of Galilee monument looks very much like the kind of holy mountain that Enmerkar would have built. It was also made from rocks that were dragged to the site from outside of the valley (not local stone). You can read online the texts about Enmerkar like Enmerkar and the Lord of Aratta, Enmerkar and En-suhgir-ana, Lugalbanda in the Mountain Cave, and Lugalbanda and the Anzu Bird. See ETCSL for a translation of Enmerkar and the Lord of Aratta. - rodgerdalman@comcast.net

9
Where was the pre-war (ww2) border between Poland and Germany?
17
How accurate and detailed were geographical maps created and updated by the Romans?
25
How was the modern geographic boundary between Europe and Asia decided?
10
Where was the U.S. president when Captain McGonagle was awarded?
1
What were the characteristics of the earliest varieties of European cattle, “bos tauros”, and how were they kept?
2
Is there a reconstruction for whom and when were the peoples of the ancient Levant just before Israel, Judea and Edom?
8
What happened when the Çatalhöyük burial holes were full and the houses had no more room?
6
How widespread was the use of red ochre by sapiens in prehistory?