What type of warship is this (likely WW2)?

I know it's not much to go on, but can anyone identify the type of vessel in the photo?

Being officers, there is no cap tally for me to try and zoom in on. 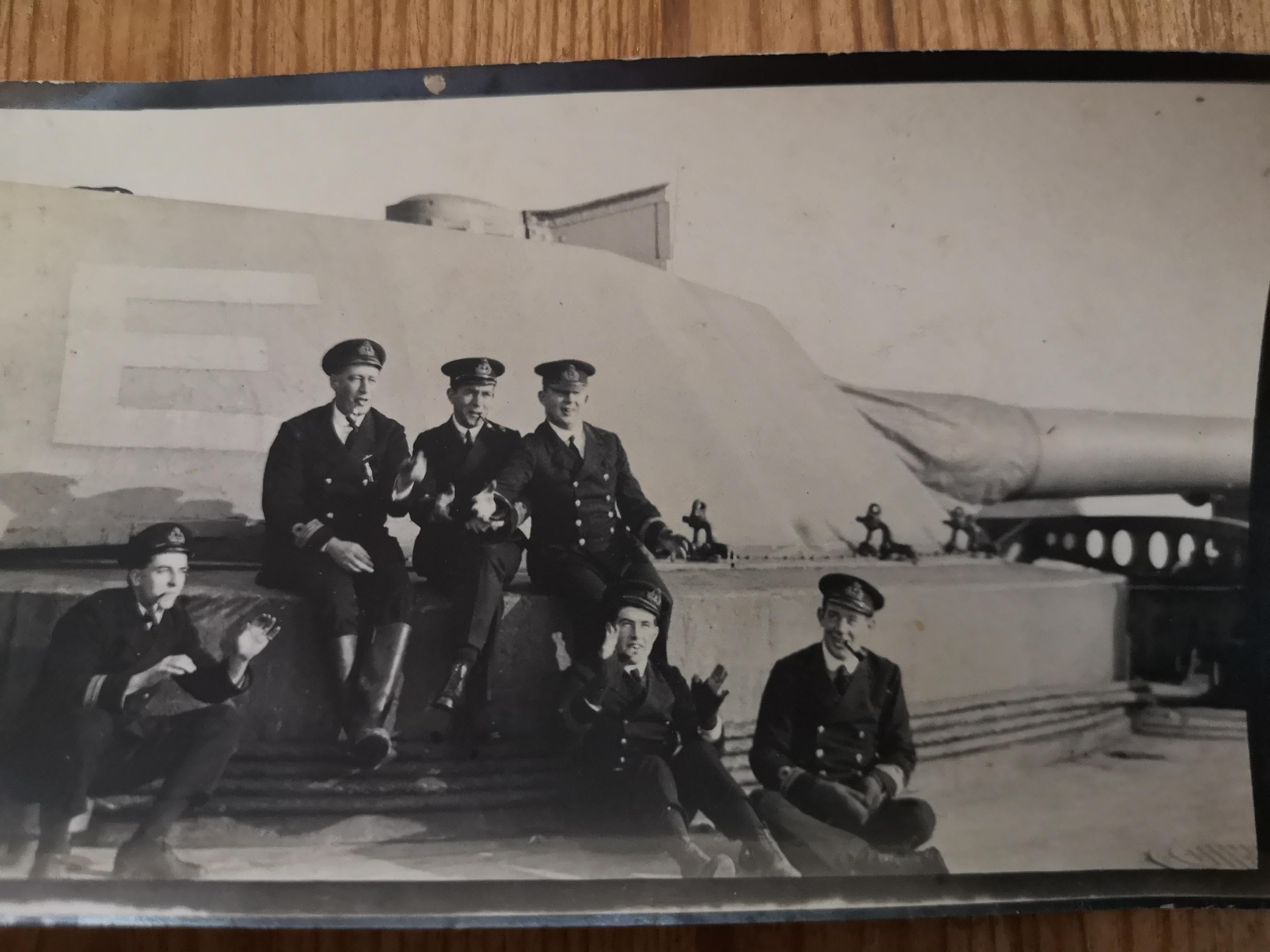 I agree completely that this looks like Royal Navy officers and a Royal Navy battleship. However, I'm going to add something to @kimchi-lover's excellent answer, and go a little further - I think there is a reasonable possibility we can identify the ship as well as the general type.

First off, dates. This is before the end of World War I; one of the officers, the lieutenant on the lower left, has no "curl" on his sleeve, and these became universal in late 1918. He is presumably an engineer, surgeon, or similar. In addition, one of the men is wearing some kind of decoration, but none of the others are. This suggests it was before the end of the war, when service ribbons would have been issued.

Secondly, the ship. @kimchi-lover suggested Dreadnought, which mounted 12" guns in similar turrets. I agree with their reasoning, but think this is a slightly earlier vessel. The four classes produced before Dreadnought had a similar but slightly different turret, seen here on Formidable. 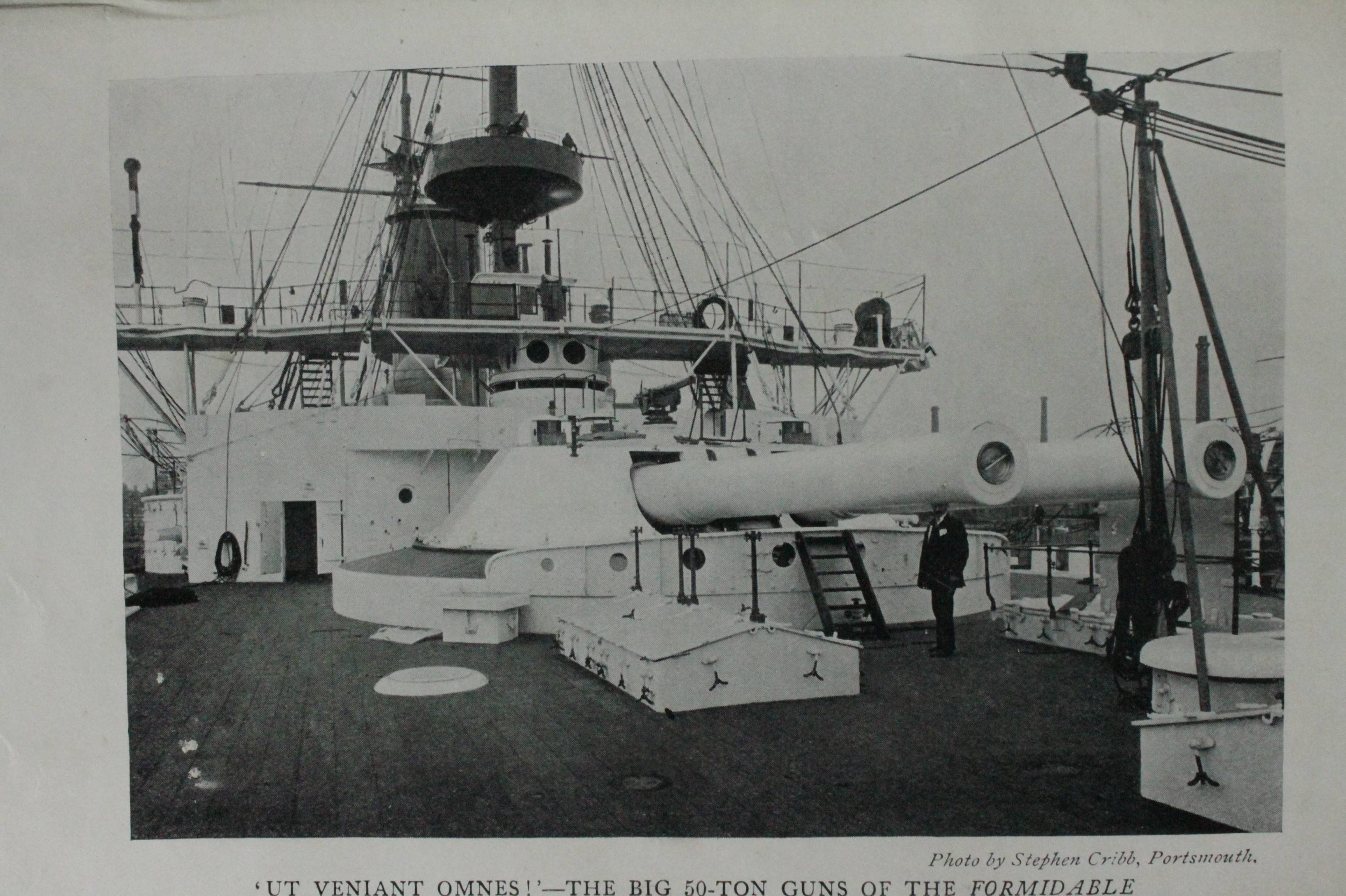 Compared to Dreadnought (below) you can see that the older style turret had a wider "pedestal" and the sides were more steeply sloped back. 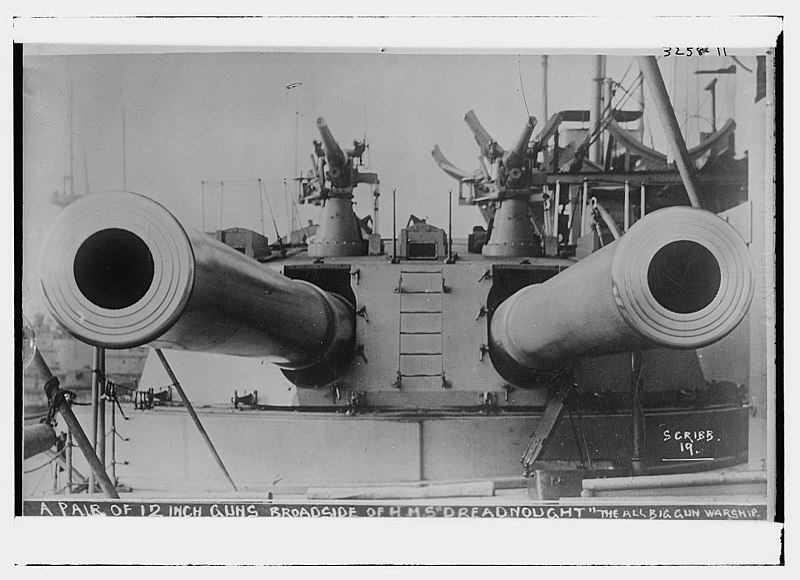 In this image of Russell, another pre-dreadnought with the older style turret, you can see the viewing port at the top of the turret and the turret "clamps" at the base. 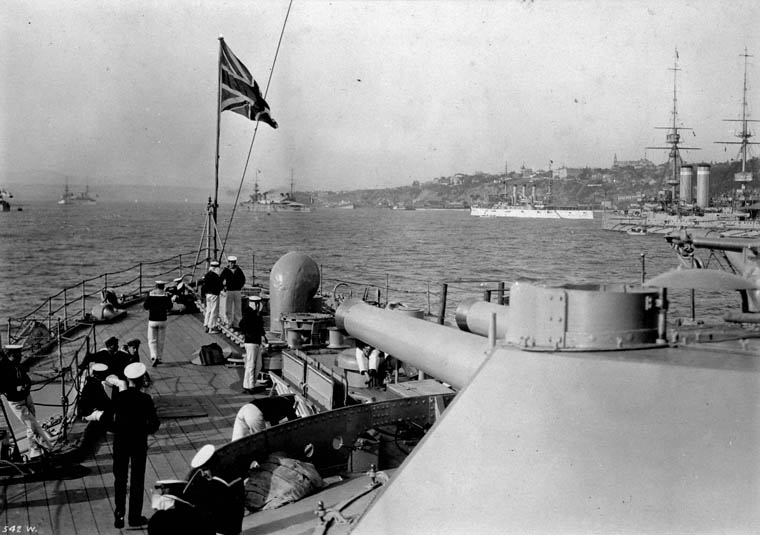 The turret these men are sitting on seems to have quite a steep slope, and the same wide pedestal - note that there's space between the right-hand man and the turret edge. The pedestal edge slopes gently downwards, and they can sit comfortably on it, whereas it doesn't look like this would be as easy with the Dreadnought style turret where the pedestal is a bit narrower. (The clamps are also exactly the same as seen on Russell, though that might be quite a trivial detail.)

This suggests it was one of four classes: Formidable, London, Duncan, or King Edward VII. All of them had very similar turret designs. Given these very close similarities, I do not think it is likely to be a ship not built by a British yard. The same guns were also sold abroad for use on Italian and Japanese warships, and seem to have had broadly similar turrets, but it seems unlikely that a visiting RN party would be posed like this on one of them, singing(?) and wearing gloves, wellington boots, etc.

So, can we narrow it down any further? I think we can. The painted letter "E" is the clue; this book (p. 285) notes that in 1914-15, some of the King Edward VII class were painted with recognition letters on the turret sides. HMS King Edward VII was "KE".

This is unusual - it's the only case I've found of identification letters actually being painted on turrets, although it does sound like a reasonable approach in large squadrons of identical ships. Apparently the more common approach was to paint distinctive stripes on the funnels - perhaps this was an experiment?

Either way, the "E" here is in more or less exactly where you'd expect to see it if it were "KE". These turrets had a single long flat face towards the back (see below) and it would be the natural place to paint the letters. The "K" is presumably just out of shot. 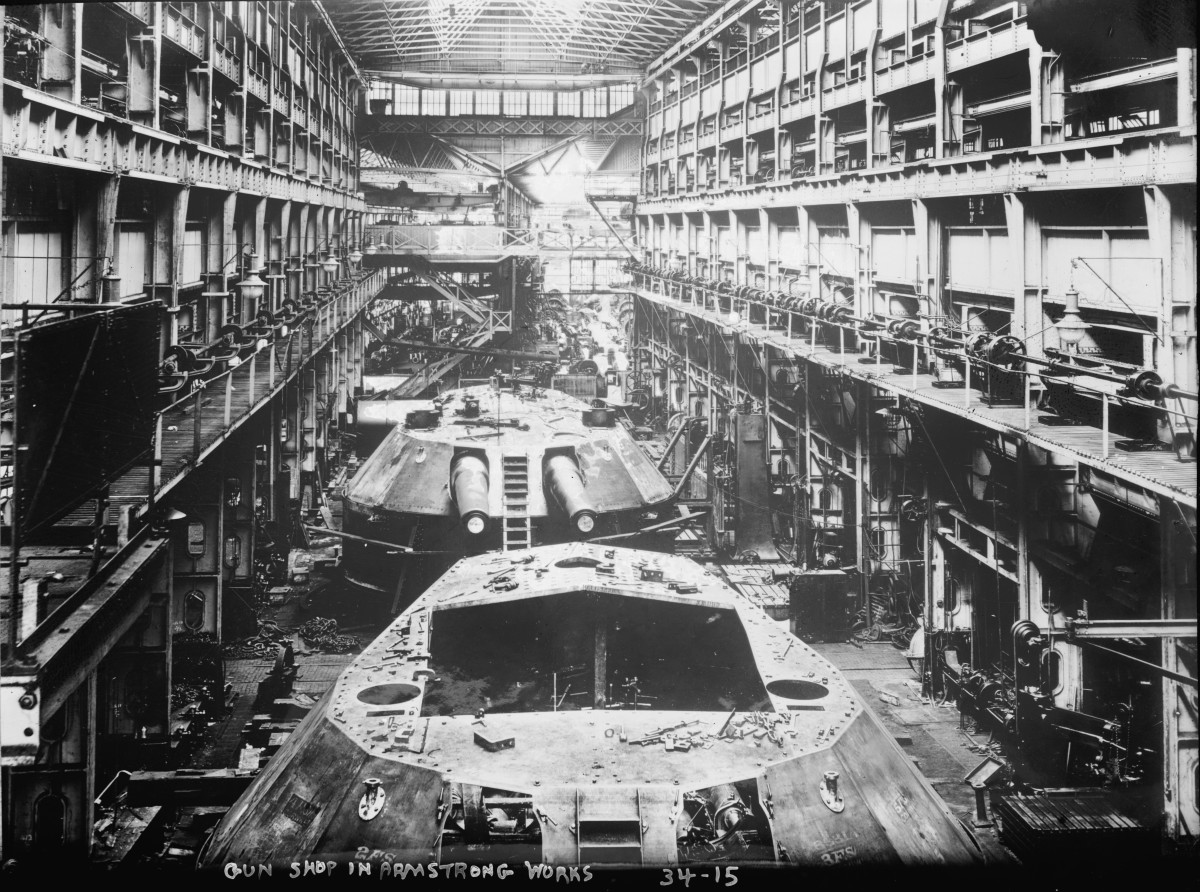 Finally, the barrier immediately in front of the guns - a steel sheet with punched holes of varying sizes - is very similar to the one seen in this photo of King Edward VII. It's a very small image and the turret itself is concealed, but the resemblance is clear. The same site has a photo of the officers, but tragically not clear enough to make out any resemblances...

If this identification is correct, which is a bit of an if, it also narrows it down to a very limited period. The letters were only painted on in 1914-15, and King Edward VII hit a mine and sank in January 1916 (remarkably, only one man out of almost 800 died). So we have both an earliest and latest date.

The short answer: a British capital ship (that is, battleship or battle cruiser) mounting 12" guns of the sort described here, that is, any "Dreadnought" built before 13.5" guns became popular, that is, built in the period 1906-12. Or possibly, as Andrew comments, some other pre-Dreadnought ship from earlier in the century, but using the same, or very similar turret design.

The features that make me sure have to do with the shape of the turret (illustrated here), in particular that it is not as wide as the turn-table it rotates on, and with the flat surfaces of its polyhedral shape. Andrew, in a comment, points out that the series of clamps at the base of the turret, visible in an illustration in the Wikipedia article about HMS Dreadnought, is very much like those seen in the OP's photograph. (I suppose the clamps are to hold a canvas cover or gasket in place, to use when the guns are not in use, and when one wants to keep water from sloshing into the turret.) The follow-on turrets, for 13.5" guns, seem to me to be too rounded, as seen here.

Another feature in common between the OP's turret and the Dreadnought turret is the presence of "sighting hoods", which look like frog's eyes protruding above the front of the turret. This might distinguish the OP's turret from other 12" turrets of the era.

The turrets of the near contemporary German ship SMS Kaiser, which bore guns of essentially the same calibre are distinctively different. The general shape (an oblong box or "gun house", sitting on a cylindrical pedestal or "barbette") is forced by the technological constraints. But the exact proportions are different. In the OP's photograph the barbette is wider than the gun house, but on the Kaiser's the gun house is almost exactly as wide as its barbette, as is the case with a later ship's turret, two decades later. In other cases the gun house is slightly wider than the pedestal.

As a speculation, I offer the guess that the feature of the "BVIII" turrets used by HMS Dreadnought that caught my eye, that the pedestal was wider than the gun house, was a transitional form, not followed by battleship turrets designed later.

Not the answer you're looking for? Browse other questions tagged naval or ask your own question.

18
Can anyone identify this warship?
8
What's the best way to convert sailing-era burden to modern displacement?
12
What is the origin of this pre-industrial naval depiction
23
What made the Russian Navy suspect Japanese torpedo boats were in North Sea in 1904?
15
What is a “barso”? (ref. Richard Cocks' diaries)
2
What is the earliest mention of use of spyglass by seafarers?
8
What were the typical types of ships used in the Persian Navy in the 1730's and 1740's?