How did the Falasha make contact with Jews outside Ethiopia?

I just read a book about an expedition to Ethiopia, The Last of Free Africa, published 1928. The author Gordon MacCreagh writes:

An astounding fact which should be of absorbing interest to Jews the world over is that there exists today in Abyssinia a lost tribe of Jews known as the Falasha, who have been isolated for so many centuries that , while retaining the Jewish faith in practically all its ancient purity, they had actually no knowledge that any other Jews existed.

It was not until almost yesterday, 1906 in fact, that definite knowledge of brothers in the faith came to these Falasha through a letter written by a congregation of European rabbis. In reply to which they wrote: "... News of your existence was to us hitherto only fable. Now have we [through your letter] received knowledge and certainty. Therefore, do we rejoice..."

Is this true? Where can I read more? Reading the original letters would be cool, but I don't even know what language they were written in.

I believe the letter to which the author is referring is in fact the "Letter to the Falashas", a public letter attributed to Hajji Seraya Khan Shapshal (a.k.a., Seraya Shapshal, Серая Бен Мордехай Шапшал, Seraja Šapšalas, Seraj Szapszał, Серге́й Маркович Шапшал), which was likely written while he was at studying in St. Petersburg 1896. This letter is often erroneously dated 1905 or 1906, for reasons unclear. It was most certainly not written written by "a group of European rabbis" but in fact was a letter signed by many prominent members of Karaite community in St. Petersburg, who were particularly interested in the news of another potential Jewish sect that (like the Karaites) either rejected or had no concept of Rabbinical Judaism—but I suspect Mr. Gordon MacCreagh did not appreciate how great schism there between the Karaites and Rabbinical Judaism in the region at that time, or simply called the Karaite Leaders "European rabbis" simply because a lay Christian reader would not be familiar with any other terms.

My understanding is original was written in Ottoman Turkish. I do not have a copy of the original, but that would have been the diplomatic language used between the Abyssinian, Russian, and Ottoman Empires at this time.

Here is the translation I have (unfortunately, I do not know its exact origin):

"Peace be upon you, dear brothers! Hallowed be the name of the YHWH, and the children of Abaraham, Yitzhaq and Yakov!

Recent publications have informed us that that you, perhaps, are our brothers!

In these books, it says you live in a distant country of Abisinia or Sheba, the called by the Israelites, Qush, and that your religion is Law of Moshe, as given to the Israelite on Mt. Sinai to the Prophet Moshe!

We understand you call yourself Falash, or Kara because you believe strictly in the Tanakh. and do not accept the Talmud or Mishna, which are accepted by "Jews".

We want to inform you that our nation derives from the Israelites. We also call ourselves as Qara, Qarai, Bene Miqra, or Qaraim. For the last two thousand years, we have lived here, in this country, which is at this time part of the Great Russian Empire. We beleive our fathers fled to Persia after destruction of Solomon's Temple; then, we moved to the country of Khazars, near Black Sea. For the last century, we have been ruled by the Czars of Russia.

We are not numerous: there are but 10,000 Qaraim in Russia, another 5,000 in Egypt and Algiers, and few Qaraim in Jerusalem, Istanbul and in German countries.

Our religion is the true religion of Nation of Israel: we believe only in Tanakh, and we reject intermarriage with Jews, or any other nations that does not adhere to the true religion. Our prayers are in Hebrew—leshon kodesh, the holy language.

Our prayers were written in ancient times by the great sages, and we use for our prayers the Psalms by King David. Our Torah is only the Torah of Moshe, which has 5 parts, Bereshiit, Shemot, Vayikra, Bamidbar and Devarim. There are also 19 books of the Prophets.

Should you, with YHWH's help, receive this letter, kindly answer our questions:

Please tell us everything about your customs, traditions, and your social and economical status. What type of jobs do you do? How do you live, what kind of dress do you wear? Are among you wealthy? Can your children read and write? At what ages are sons and daughters wed?

How numerous of you? What languages do you use? What are the differences between you and the other local nations?

We hope that you will answer us all our questions and they you will inform us that in your distant country live our brothers—Israelites, believers in one God. Qaraim.

Please inform us of your address or by what post we can deliver our next letters. Do you travel? If some of you ever visit other countries, please inform us if any are in distant countriesm of Europe and Russiam or in Egypt, Palestinem and Holy Yerushalayim. If any one of you could will travel to Russia, you will be able to find us in Peterburg, Moscow, Odessa, in Crimea (Yevpatoriya, Sebastopol, Simferopol, Feodosiya); these are our communities.

We pray to YHWH to hallow you and are sending you best regards.

There is no mention there of the 1906 letter you cite, but there is a reference there that may reflect it:

Perhaps this "Official Recognition" in 1908 was the result of your 1906 letter. The timing seems right.

Be that as it may, the history of the Ethiopian Jews along the lines you mention is well documented and verifiable. Supra (just a few snippets - there is a great deal of material there):

Once they were kings. A half million strong, they matched their faith with fervor and out-matched the Moslem and Christian tribesmen around them to rule the mountain highlands around Lake Tana. They called themselves Beta Israel—the house of Israel—and used the Torah to guide their prayers and memories of the heights of Jerusalem as they lived in their thatched huts in Ethiopia.But their neighbors called them Falashas—the alien ones, the invaders. And even three hundred years of rule, even the black features that matched those of all the people around them did not make the Jews of Ethiopia secure governors of their destiny in Africa” (“Falashas: The Forgotten Jews,” Baltimore Jewish Times, 9 November 1979).

For centuries, the world Jewish community was not even aware of the existence of the Jewish community of Ethiopia in the northern province of Gondar. The miracle of Operation Solomon is only now being fully understood; an ancient Jewish community has been brought back from the edge of government-imposed exile and starvation.....

Relevant to the source and letter you cited and their intial contact with modern Jews:

The first modern contact with the now oppressed community came in 1769, when Scottish explorer James Bruce stumbled upon them while searching for the source of the Nile River. His estimates at the time placed the Beta Israel population at 100,000, already greatly decreased from an estimate from centuries before of a half-million.
Little additional contact was made with the community, but in 1935 their stability was greatly threatened as the Italian army marched into Ethiopia. Ethiopia's ruler, Emperor Haile Selassie fled his country and actually took refuge in Jerusalem for a short time. Selassie returned to power in 1941, but the situation for the Beta Israel improved little...

After taking office in 1977, Israeli Prime Minister Menachem Begin was eager to facilitate the rescue of Ethiopia's Jews, and so Israel entered into a period of selling arms to the Mariam government in hopes that Ethiopia would allow Jews to leave for Israel. In 1977, Begin asked President Mengistu to allow 200 Ethiopian Jews to leave for Israel aboard an Israeli military jet that had emptied its military cargo and was returning to Israel. Mariam agreed, and that may have been the precursor to the mass exodus of Operation Moses began....

Over 8,000 Beta Israel came to Israel between 1977 and 1984. But these efforts pale in comparison with the modern exodus that took place during 1984's Operation Moses...

I personally lived in Israel throughout the 70's and 80's and met many Ethiopian Jews, who, unlike most modern Jews, are black, but today they are accepted in Israel as Jews without reservation. At the time of their initial influx in the '70's, there was some discussion about the legitimacy of their claim to being Jews that did not require conversion, but the conclusion was reached that they were authentic Jews and had rights under The Law of Return:

In 1975, Ashkenazic Chief Rabbi Shlomo Goren wrote to the Beta Israel telling them, “You are our brothers, you are our blood and our flesh. You are true Jews.” Later that same year the Israeli Interministerial Commission officially recognized the Beta Israel as Jews under Israel's Law of Return, a law designed to aid in Jewish immigration to Israel. The Beta Israel were ready to come home.

More than 36,000 Ethiopian Jews now live in Israel and despite both economic and social hardships, their community has an integral part in Israeli society. In 1999, Avraham Yitzhak became the first Ethiopian immigrant to earn an MD degree from an Israeli medical school. In 2011, the Israeli Ministry of Foreign Affairs appointed Rachamim Elazar as Israel's Ambassador to Ethiopia, making him the first Israeli of Ethiopian descent to ever serve as an ambassador for the State of Israel. There are still many problems within the Ethiopian community in Israel - poverty, lack of education, etc - but large strides are being made every day. 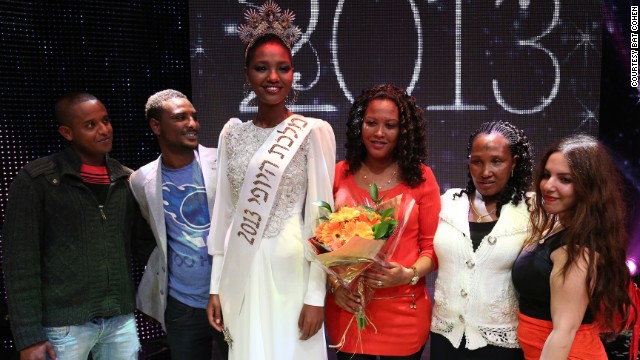 For some serious historical scholarship, you should investigate the works of The British Historian Tudor Parfitt, Books by Tudor Parfitt,who has dedicated most of his career to investigating and writing about the history of the Jews in Africa and Asia. In particular, see: The Beta Israel in Ethiopia and Israel: Studies on the Ethiopian Jews, his important collection on this subject. I don't have it at my disposal unfortunately - perhaps there you can find discussion specifically about the letter you are referring to.

Update: Upon reading Parfitt's The Lost Ark of the Covenant, written in 2008, I found that he mentions that genetic testing has shown that the Beta Israel (Falasha) lack a genetic marker that all other known Jews in the world possess, while remarkably, The Lembas, of Zimbabwe and South Africa, do possess this marker.

Share
Improve this answer
edited Oct 15, 2013 at 1:04
answered Aug 30, 2013 at 17:21
user2590user2590
5
Add a comment  |
Highly active question. Earn 10 reputation (not counting the association bonus) in order to answer this question. The reputation requirement helps protect this question from spam and non-answer activity.

12
Why did Martin Luther hate the Jews?
4
How and when did Jews get to the shores of the Baltic?
1
Did the Hanseatic league have any involvement with Jews?
2
How isolated were Yemenite Jews in the last millenium?
20
What historical reasons did the Nazis give for hating the Jews? How did they identify non-practicing Jews?
9
How accurate and balanced is Paul Johnson's 'A History of the Jews'?
3
Why did Ethiopia not fight with Eritrea over coastal territory when giving them independence?
5
How much were Jews allowed to take with them from Nazi Germany?